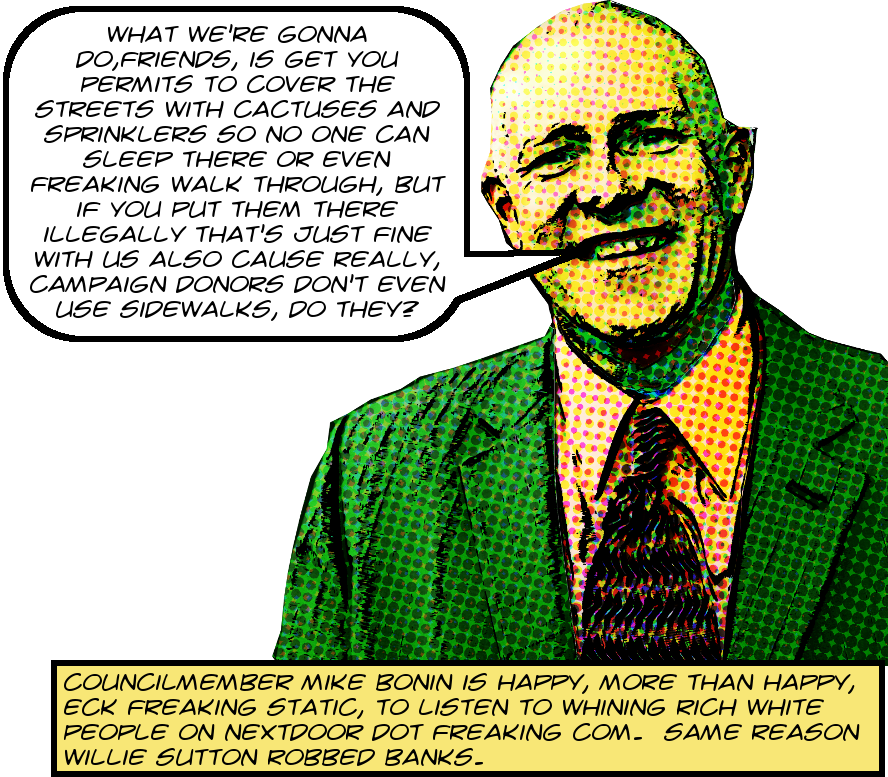 There has been a wave of anti-homeless landscape architecture around Los Angeles, mostly involving planters. Some of these projects, like Miguel Nelson’s so-called North Sea thing in Skid Row, are done legally, meaning with permits obtained from the City. Others are completely illegal, like the livestock troughs full of dirt and cactus dumped all over the sidewalks of Palms Blvd. in Venice by despicable anti-homeless vigilante Mark Ryavec and his lynch-mob buddies at Lincoln Hardware.

And recently, a Venice resident, fed up with the attitudes of his or her neighbors, sent me a screenshot of a thread on Nextdoor.com, which seems to function more or less as the Radio Télévision Libre des Mille Collines of the Los Angeles anti-homeless brigades, wherein another such project is being planned.1 These property owners have raised more than $70,000 on their GoFundMe page to install cactus and sprinklers obstructing most of a block-long public pedestrian path along the west edge of the Penmar Golf Course in order to prevent homeless people from continuing to live there.2

And even though this unfiltered glimpse into the white-hot seething id of homeless-hating planter proponents is interesting enough, like a rampaging flock of crocodiles or something, it’s not the most important aspect of this revelation. The most important thing revealed here is the level of the City’s complicity with this project. According to the organizers, Mike Bonin’s staff helped them obtain permits and also attends their community meetings to help them raise money.

This is in stark contrast to the absolute indifference the City displays when citizens concerned with blatantly illegal antihomeless measures seek help navigating City bureaucracy. Where was Mike Bonin’s office when activists were trying to get the City to enforce its own laws against unpermitted sidewalk-blocking planters? Nowhere, actually. It’s not their problem, it seems. Not their job to enforce those particular laws against those particular perpetrators. After the break you’ll find some quotes about and details of Bonin’s complicity.

But before that, here’s an interesting little episode revealed in this discussion. On October 20, 2018, Mark Ryavec, the Adolf Eichmann of Venice, evidently whipped into some kind of visionary frenzy by all the talk of cactuses, asked one of the organizers: “…who might I contact to get the name and contact info for the landscape architect?” And they told him. And a little over a month later Ryavec and his minions, with the abject complicity of the City of Los Angeles, were replacing homeless human beings with illegal hostile planters at the corner of Palms and Lincoln.


And here are the details of how Mike Bonin is helping these people to block off a public right of way for their own nefarious purposes. According to the GoFundMe page, which by the way lists donations of as much as $5,000, well, read it:

We have been working with the local city council office for the past two years and have a permit to landscape this area so that a clean, attractive pedestrian Pathway will be created, and the empty space surrounding it will be filled in with native plants and landscape features.

And this is confirmed by an announcement of a meeting by one of the project’s organizers:

Please join us on on November 7th at 7:30pm at the home of our very gracious neighbors at 846 Warren Ave to discuss the Frederick Ave Pass-Through landscaping project. You will have an opportunity to ask your questions directly to the community organizers as well and speak directly to a representative from Mike Bonin’s office.

And confirmed yet again in another comment: “I think this got lost in the thread. There is already a permit for the landscaping. Bonin’s office made that happen. Just need money! Donate!” What a contrast, isn’t it, with the way the City treats people opposing illegal planters, about which Bonin’s office won’t even comment. There’s something really wrong when the City’s willing to announce its involvement on a locked-down platform like Nextdoor but won’t even comment for publication in an openly-available magazine.

And of course there’s nothing really special about this project. I’m sure stuff like this happens all over the City and happens in just this way, with angry hateful property owners, who have big yards and can drive to wherever they want and so who don’t need public space at all, who are ready to destroy the public space they don’t use in order to fuck up homeless people who scare them and, they think, lower their property values.

I’m sure it happens just like this, with Council offices facilitating the process in secret within the walled garden of Nextdoor.com away from press scrutiny. What’s different here is that we have evidence. Maybe we’ll get evidence of the City’s role in other projects too … stay tuned!

Image of Mike Bonin is©2018 MichaelKohlhaas.Org and then there’s this.

4 thoughts on “Venice Property Owners Have Raised More Than $70,000 To Cover A Pathway Near The Penmar Golf Course With Cactus And Sprinklers — With Full Cooperation Of Mike Bonin’s Office — Which Helped Them Obtain Permits — We Have A Copy Of Secret Nextdoor Dot Com Discussion — Which Provides Insight Into City Of LA Complicity — Not To Mention The Kind Of Hateful Anti-Human Pre-Genocidal Rhetoric That Drives These Projects — Also Reveals Mark Ryavec Asking About Landscape Architects In October 2018 — One Month Before He Helped Arrange For Illegal Palms/Lincoln Planters”