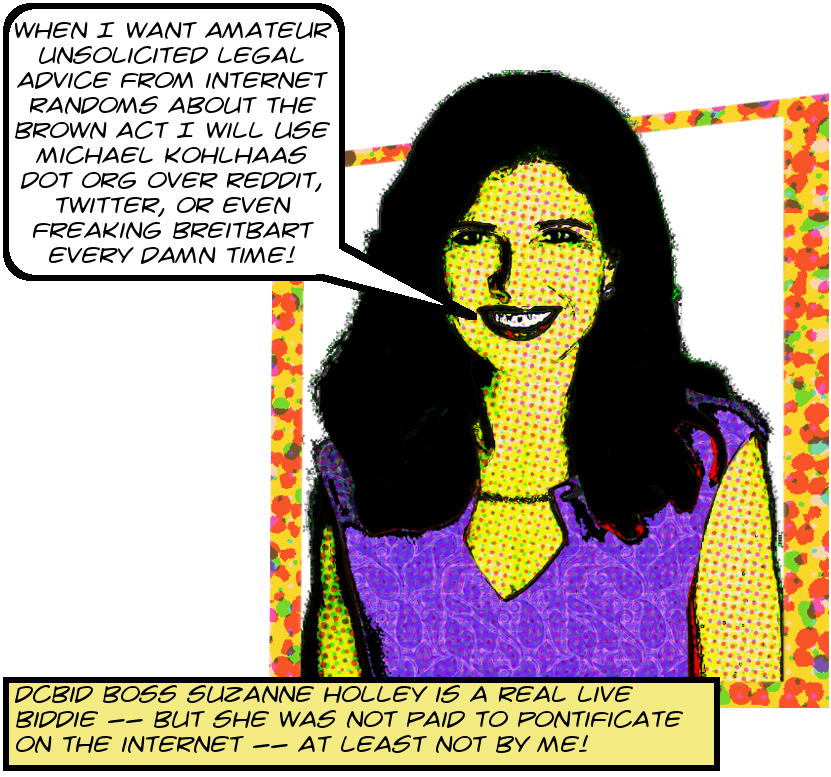 It’s quite a common occurrence around here for some random BID to send out yet another completely freaking illegal agenda or violate some other major requirement of the Brown Act and then, because I can’t send demand letters to all of them, I just drop them a friendly note and they, because you can’t argue with the truth, just go ahead and fix the damn agenda.

This is a useful pastime for all concerned. The BIDs get a free and easy lesson in how to follow the damn law,1 I get to write a blog post on the episode,2 and you, the faithful reader, get to hear about yet another technical violation of the Brown Act, which is really edumacational and why else is anyone even reading this damn blog if not to be edumacated? So like for instance the South Park BID does this on a regular basis, and the Venice BID has had an episode as well.

Oh, and I know I said above that you can’t argue with the truth, but actually the baddest BIDdies of them all of the moment, that unhinged flashmob of sick chuckleheads3 known to all students of BIDology as the Studio City BID, famous for having board members whose consciences are so guilty that they will not allow themselve to appear on camera, can in fact argue with the truth.4 This is why, after they refused to consider my friendly admonition that they were really blowing it with respect to the Brown Act, I had to send them a demand letter.5

But those Studio City-zens are the exception rather than the rule. Which brings us to today’s episode.6 It seems that on Monday, October 1, 2017, I received this agenda for a meeting of the Downtown Center BID’s executive committee, scheduled for yesterday morning. Thereon appeared this item:

And, you know, this is better than some attempts at describing closed sessions I’ve seen. At least they cited an actual code section as justification for closing it, which is more than many BIDdies will do. But it’s still not good enough, not nearly. These BIDdies gotta learn that a basic principal of the Brown Act is that what they say in a closed session might get to be a secret but what they’re doing in there rarely does. Read on for the gory details and what happened next!

The first thing to remember is that the Brown Act requires that all meetings be open to the public unless there’s a specific reason given explicitly in the law that authorizes a closed session. That is, open meetings are the default. The Brown Act at §54953(a) states:

Thus if they’re going to close a meeting there has to be a reason that’s explicitly listed in the law that allows them to do so. Note that the DCBID did actually cite a section in the law purporting to allow them to close their meeting for “personnel matters,” that is to say California Government Code §54957(b)(1). Here’s what that says:

… this chapter shall not be construed to prevent the legislative body of a local agency from holding closed sessions during a regular or special meeting to consider the appointment, employment, evaluation of performance, discipline, or dismissal of a public employee or to hear complaints or charges brought against the employee by another person or employee unless the employee requests a public session.

Anything else to do with personnel matters, like e.g. bonus amounts or whatever, is not sufficient to close a meeting.

Now, the Brown Act is a complicated law, and it’s hard to remember every intricate detail and their manifold ramifications. But a fundamental predictive principle of what the Brown Act is likely to hold is that local agencies have to give the public enough information to decide if they want to attend meetings and comment on items. This is why, e.g., local agencies are required by the Brown Act at §54954.2(a) to describe what they’re doing in closed sessions:

… the legislative body of the local agency, or its designee, shall post an agenda containing a brief general description of each item of business to be transacted or discussed at the meeting, including items to be discussed in closed session.

Probably you can imagine at this point that the phrase “brief general description” is likely to be a site of some significant contention. Like what’s descriptive enough? Well, it turns out that not only has there been contention, but that the legislature has tried to resolve it by giving so-called “safe harbor” descriptions right in the law. These are suggested8 descriptions for closed session items which are guaranteed to meet the law’s requirements. The ones corresponding to personnel matters are found in §54954.5(e):

(No additional information is required in connection with a closed session to consider discipline, dismissal, or release of a public employee. Discipline includes potential reduction of compensation.)

So clearly, despite the fact that the DCBID quoted a section of the statute, their description didn’t at all include enough information! So I fired off this little email to Suzanne Holley, basically saying “Hey Friend! Fix your damn agenda!”:

I’m just writing to let you know that the agenda for your 10/3 executive committee meeting violates the Brown Act.

It states that you’re holding a closed session to discuss personnel matters per section 54957(b)(1). That section authorizes closing a meeting only for the following specific personnel matters: “appointment, employment, evaluation of performance, discipline, or dismissal of a public employee or to hear complaints or charges brought against the employee by another person or employee.”

It’s clear from section 54954.5(e) that in order to comply with the agenda item description requirements set at section 54954.2 it’s necessary to reveal which of these reasons is in play and under most cases the position title involved.

I regret that I wasn’t able to inform you of this problem within the 72 hour posting deadline, but I suppose you have the option, often used by our mutual friends at 200 N Spring Street under similar circumstances, of calling the meeting special if you care to correct this fairly serious error.

Oh, yeah, the Brown Act requires agendas to be posted 72 hours before the meeting and this was all happening on the afternoon of October 1 for a meeting on October 3. That’s why there wasn’t time for them to correct the agenda in the ordinary manner. But the Brown Act permits some meetings, so-called special meetings, to be posted only 24 hours in advance.9 I don’t know if this can be used for fixing messed-up regular agendas or not, but I told them it could.10 After all, I’m not a lawyer, right?

And I guess I was convincing, because after not so very long, Ms. Suzanne Holley sent me a reply by email, and here is what she said:

Thank you for bringing this to our attention. Please note that the previously scheduled Executive Committee meeting has now been replaced by a Special Meeting for which the agenda is attached.

Here’s a copy of the revised agenda that she sent, and which is now posted on the BID’s website. And here’s the revised description of the item:

So yay! Another small victory in the battle for law-abiding BIDs in Los Angeles. And this one achieved not only without litigation but without even a threat of litigation! And what a teachable moment for all! Like our hero the Dodo Bird did say that one time, everybody has won and all must have prizes!

Image of Suzanne Holley is ©2018 MichaelKohlhaas.Org and is loosely based on this lil Holley right here.