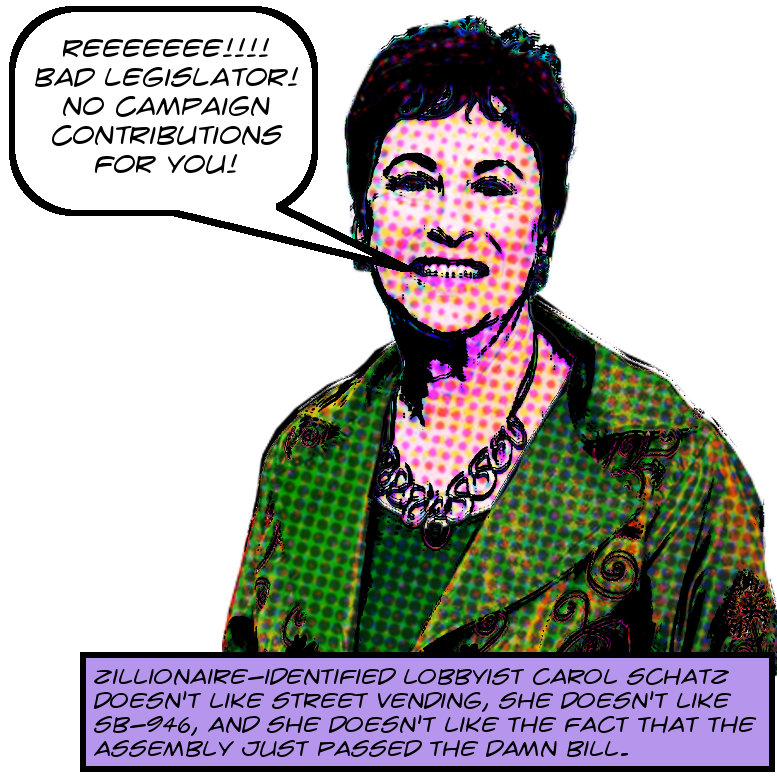 For background take a look at this fine article in the Times by Emily Alpert Reyes.

Ricardo Lara’s monumental street vending regulation bill, SB-946, was read in the Assembly for the third time yesterday and passed 56 to 17 on a straight party-line vote.1 Because it was amended in the Assembly, notably here and here, it has to go back to the Senate for one more vote before heading to the Governor’s office.

The bill is universally opposed by Los Angeles BIDdies. Led by Carol Schatz of the Central City Association, they have been opposing it vigorously since its introduction in January 2018. Their overwrought terror of this bill is a natural consequence of their unhinged, years-long opposition to street vending in Los Angeles despite the essential role it plays in the social and cultural life of this City.

Surprisingly, the political juice of the BIDdies has availed them not in this particular struggle. We’ve seen how they’re able to reach out even all the way to Sacramento to kill off bills that threaten their plutocratic reign over almost every aspect of our daily life. But here, it’s not working. Even Miguel Freaking Santiago, their flunky in every possible situation, voted for SB-946.

A veto from Jerry Brown is their last hope. And maybe they’ll get it, who knows? You can bet what passes for good money in these latter days of the economy that they’re working on him right now. And if they manage to talk him around to their point of view, it’s the end of the matter, since our esteemed legislature is never ever going to override him. Anyway, I don’t know how long it’ll take for this to come up before the Senate, but you’ll hear about it here when it does!

Image of Carol Schatz is ©2018 MichaelKohlhaas.Org. The original from which I worked to create this minor masterpiece is available here.