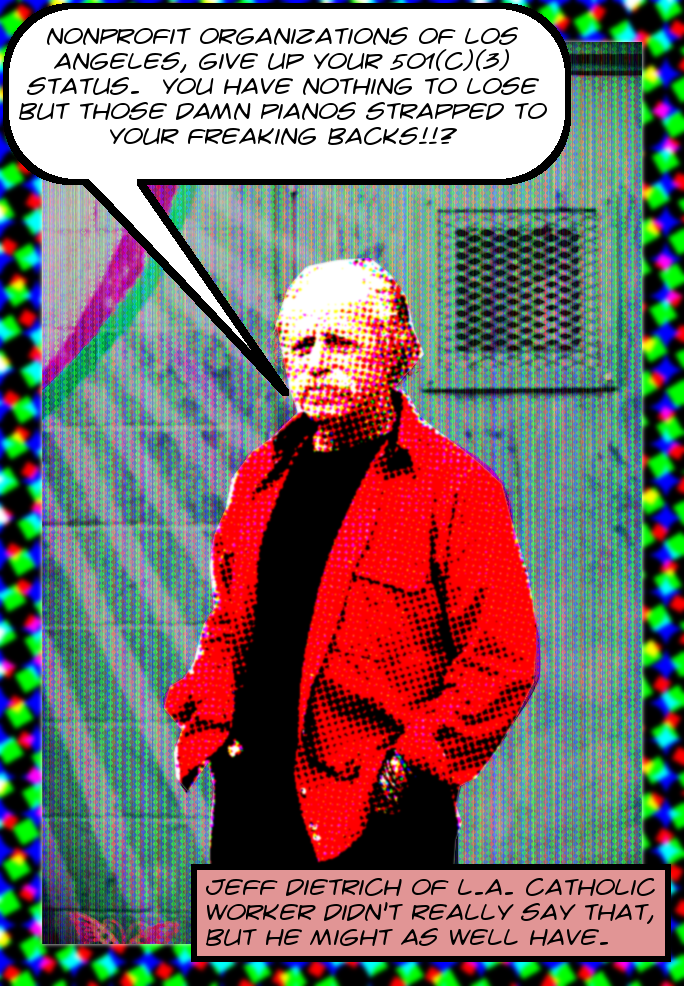 No doubt you recall that the Los Angeles Ethics Commission is presently working on proposing revisions to the Municipal Lobbying Ordinance (MLO) and that part of the process has been to hold a bunch of meetings to gather input. I recorded the first of these, which turned out to be quite interesting. The second focused on neighborhood councils and I’m working on obtaining an audio recording of it.

The third meeting focused on nonprofit organizations that lobby the City. I wasn’t able to make it, but fortunately for all of us, it was recorded by Bobby Buck, a brave citizen journalist. He posted his recording on YouTube for all to watch and listen. The main issue under discussion here is which 501(c)(3) organizations will be exempt from the registration and disclosure requirements of the MLO. Currently the law at §48.03(E) presently exempts 501(c)(3)s from the requirements if they receive:

… funding from any federal, state or local government agency for the purpose of representing the interests of indigent persons and whose primary purpose is to provide direct services to those persons, if the individual or individuals represented by the organization before any City agency provide no payment to the organization for that representation.

The Ethics Commission staff is proposing1 that this be tightened up to exempt only:

501(c)(3) organizations that receive government funding and are created primarily to provide basic life assistance to disadvantaged clients at a rate that is significantly below market (and their employees engaged in the same activity).

The meeting is more than 90 minutes of the usual bitching and moaning, and I’ll write on various episodes as I have time. Tonight’s installment concerns these comments by yet another genius, this one from the Inner City Law Center, who thinks that just because he claims to be doing good in the world no one really has the right to question anything he says or does, let alone subject his organization to any kind of registration or disclosure requirements.2 Turn the page for a transcription of some of his remarks and some commentary.

In short, his argument is that 501(c)(3)s already have a piano strapped to their backs3 in the form of reporting requirements that for-profit firms are not subject to and therefore requiring them to disclose their lobbying activities will not only be like strapping yet another freaking piano to their backs, but it will further exclude poor people, people of color, and undocumented people from the political process.4

And then he says that a requirement that his organization and others similarly situated start registering and disclosing, which they clearly would under this proposal, not only will it exclude poor people, nonwhite people, undocumented people from the political process just like racists do in freaking Mississippi, but he accuses the CEC’s director of policy, Arman Tarzi, of “increasing the fear in the world.” And what does it mean to be increasing the fear in the world at this particular historical moment? Well, as he’s careful to point out, this “is what we’re trying to fight at the D.C. level, right?” You heard it here first, folks! Requiring the ICLC to register as a lobbyist employer is giving aid and comfort to freaking Donald Trump!

His credibility, though, is somewhat diminished by the fact that, for whatever reason, he neglects to mention a huge, giant, overwhelming burden that for-profit firms are subjected to that 501(c)(3)s are not. That is, freaking TAXES. I’m guessing that all these for-profit lobbyists who’ve been whining about the burden that increased disclosure would place on them would actually be thrilled to report every single action they ever took ever in exchange for not having to pay taxes. Nonprofits don’t have to pay taxes on revenues, on property or other assets, and so on. This is a massive subsidy that other people have to pay for.

That is, nonprofits use streets, sidewalks, police, courts, and so on. They hire employees educated at public expense. They rely on laws, on real property records, enforceable contracts, on financial regulations, on infrastructure, on regulated utilities, and so on and on and on. All of this costs a lot of money which they don’t contribute towards. And there’s nothing wrong with this. The people of this country have decided to subsidize nonprofits in this way. But it really is a huge subsidy and it would be foolish to grant it without retaining some oversight. That’s all that the various reporting requirements and limitations on activity are that this guy is bitching about.

Anyway, if he doesn’t like the requirements that come along with 501(c)(3) status, there’s a simple solution that doesn’t involve trying to warp the lobbying regulations of the City of Los Angeles to meet his own parochial needs. His organization could just revoke their 501(c)(3) status, pay taxes like everyone else, and free themselves of that damnable piano.5 This is not unheard of in the world of nonprofits, nor even in the world of Los Angeles nonprofits. The most famous example is Los Angeles Catholic Worker, which states emphatically that:

The LACW is not a 501(c).(3) non-profit corporation and donations to the LACW are not legally tax-exempt. (This policy was instituted by Catholic Worker co-founders, Dorothy Day and Peter Maurin, who believed Christians should not expect reward from the government for fulfilling our Christian obligation.)

No 501(c)(3), no burden, friends! It’s doubtful that they’d even end up having to pay taxes on their revenues, since gifts are not taxable to the recipient.6

Transcription of some of the ICLC guy’s remarks:

OK, well, I want to just kind of amplify what Michelle said earlier, which is that 501(c)(3)s are already not treated the same, so we are not starting from the same place, or we have a bigger burden already. It’s like having a hundred meter race and two people and they both have to run a hundred meters, but one has a piano on his back. The 501(c)(3) has a piano on its back. And the piano is all the reporting we already have to do that for-profits are not required to do. So we by law cannot have a substantial amount of our work be lobbying. We cannot support an electoral candidate. We cannot, I mean, that’s illegal. We can have our certification, we have to report all these things already to the feds, OK? So we already have to do that stuff, and you’re saying, well, you don’t get the exemption, you have to be treated fairly with everybody else. But it’s already not fair. We already have a piano on our back. We don’t want a piano on everybody else’s back, but don’t put two pianos on our back, which is what you’re doing now. And the result of that is not simply that people won’t comply. What will happen is what already happens with the existing federal rules. People do not participate. It’s not rich people who don’t participate. It’s not empowered people who don’t participate. It’s poor people. It’s people of color. It’s people who are at risk or marginalized. Undocumented people don’t [unintelligible]. You’re increasing the fear in the world, which is what we’re trying to fight at the D.C. level, right? So you’re gonna continue to marginalize people from lack of participation. So this is serious. It’s not about compliance, it’s about whether people participate in the political process.

Image of Jeff Dietrich of LA Catholic Worker is ©2017 MichaelKohlhaas.Org and is based on this original.