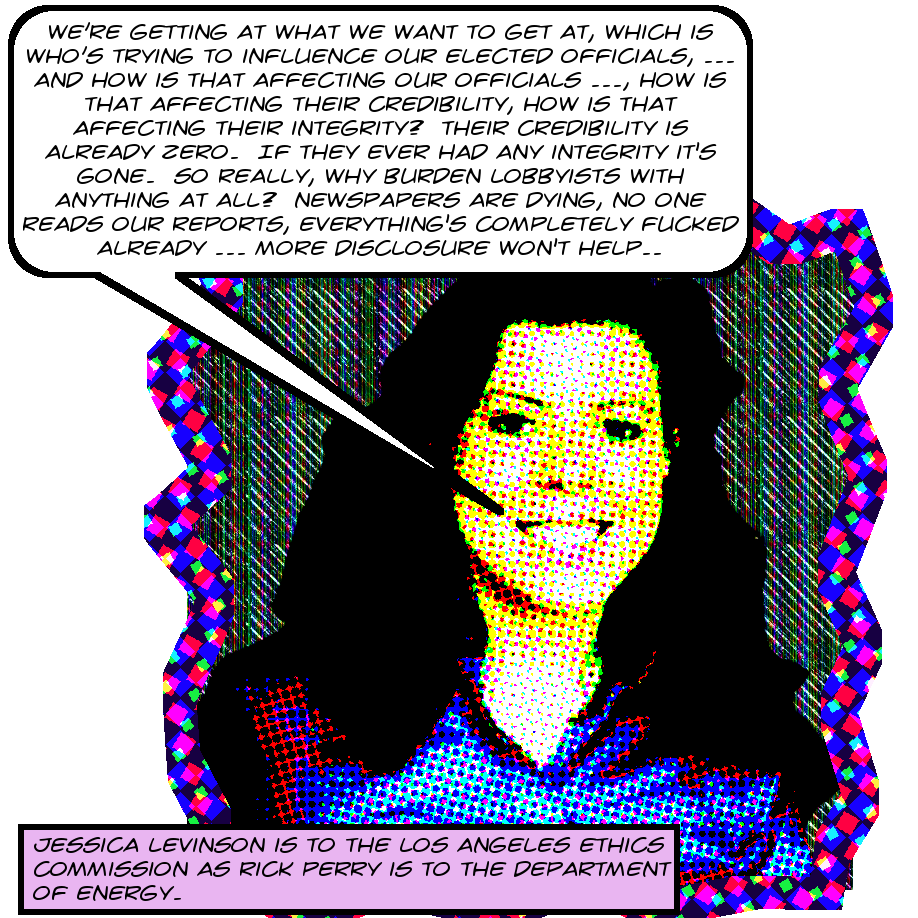 On August 15 the City Ethics Commission met and discussed proposed changes to the Los Angeles Municipal Lobbying Ordinance. The Commissioners with one notable exception were disgracefully deferential to the trumped-up concerns of a bunch of lobbyists. You can read the full set of staff recommendations as well.

I hope everyone who cares about government ethics in Los Angeles will write comments to the Commission. I’m currently working on a series of my own positions, to be compiled and submitted as public comment. This post is the second in the series, and the previous item was In Defense of a Compensation-Based Registration Threshold for Lobbyists.

Today I’m defending the proposed change to a requirement that lobbyists report individual contacts with City officials by name and title. Right now there’s a super-minimal reporting requirement which is essentially ineffectual. As always, if you have no idea what I’m talking about, you’re not alone. Turn the page for an introduction to the issue and arguments in favor of making the change.

Presently, the Municipal Lobbying Ordinance at LAMC §48.08(B)(12) requires every registered lobbyist to report “[e]ach City agency that the lobbyist attempted to influence.” There are analogous requirements for lobbying firms and so on.1 It also doesn’t presently seem to be required that lobbyists regularly disclose the issues they’re lobbying for or against.2 The trouble is that it’s possible to comply with this requirement without revealing any useful information whatsoever.

Just for instance, consider this random example from 2017. Here is the required registration form for Arnie Berghoff & Associates, a local lobbying firm. It’s required, as mentioned, to disclose on these forms one’s clients, their issues, and the City agencies lobbied on their behalf. The first client listed is Affirmed Housing Group, the City agencies to be lobbied are “Mayor, Office of; City Council; Housing Authority (HACLA),” and the issues are “Representation of client with regards to affordable housing projects.”

Now, imagine you, as a citizen, as a journalist, want to find out what Arnie Berghoff is doing for Affirmed Housing Group on this matter. Essentially your only tool is the California Public Records Act. It’s not safe to assume that Arnie Berghoff mentions to City staff who he’s lobbying for, so to have a chance of getting everything you have to request documents of the whole City Council about “affordable housing projects.” Of course, this involves requesting stuff from 15 separate Council Districts and waiting for their responses.

Since the vague description has forced you to make a broad request it’s quite likely they’re going to tell you that you have to refine it before they’ll even search.3 Without more information, though, it’s hard to know how to refine your request.

In theory the CPRA requires City agencies to help you refine it, so you might ask them to give you everything from Arnie Berghoff or his employees that has to do with affordable housing. Again, maybe too broad. Also, having to do multiple request rounds is exceedingly wasteful of time given how the City routinely takes months or even years to respond. And because Arnie Berghoff didn’t even say which Council Districts he lobbied, let alone which staff members, you have to keep up correspondences with no less than 15 staffers. Those are some of the problems with the current system.

Now, here’s how the Ethics Commission staff describe their proposal on this subject:4
The MLO requires lobbying entities to disclose each City agency that they attempted to influence during the reporting period. LAMC § 48.08(B)(12)(b). We recommend providing more context by also requiring the disclosure of the title and division of each City employee contacted during the reporting period.

Some City departments have thousands of employees, so knowing only which department was lobbied does not provide much understanding of what lobbying activity is taking place. Knowing the title of the person lobbied could also potentially identify what stage of the legislative or administrative process a City decision is in.

Similar specificity is required in other cities. For example, San Diego requires disclosure of the name and department of each official who was lobbied by an organization or firm lobbyist. San Francisco requires their contact lobbyists to disclose the name of each officer with whom they made contact and the date on which each contact was made. And San Jose requires disclosure of the official contacted, the date of each contact, the total number of contacts with that official during the review period, and, for contract lobbyists, the method of communication for each contact.

We believe that more specificity is necessary for a well-informed citizenry and that it will significantly enhance public awareness.

Armed with this information, it would be possible to make highly targeted CPRA requests of only the relevant Council Districts, asking only for relevant staff emails. Since disclosures would be have dates of contact it would be possible to make the requests even more focused. This would cut down greatly on rejections of CPRA requests on the grounds that they’re too broad and would therefore make it much more feasible to investigate the attempts at influence.

At that horrific meeting on August 15 lobbyists in their public comments both parodied and decried this proposal relentlessly. Lobbyists really, really, really do not want to have to disclose their contacts with City officials. Four out of five Commissioners seemed to really believe in what the lobbyists were saying. Thus public comment in favor of the proposed change is essential. You can send your comments to ethics.policy@lacity.org. The next meeting is on October 17, so it’d be good to get it in before then. Here are some talking points on the popular objections to the change that might be useful if you feel moved to write to the Commission:

This is just silly. The proposed change would only require reporting of contacts in relation to attempts to influence City matters. Saying hello is not an attempt to influence anything. Also, the proposed law specifically excludes so-called ministerial matters. These are things where the City official has no discretion, like making appointments and so on.

■ Disclosing this much information will be too much work for the lobbyists.

Again, this is just silly. Lobbyists charge their wealthy clients a huge amount of money. If new disclosure requirements are too much work they can hire more staff and pass the charges through to their clients. Recall that, according to the staff, this proposed level of disclosure is already required in San Diego, San Francisco, and San Jose. It doesn’t seem to have driven lobbyists out of business in those cities. Why would Los Angeles be different?

By the way, if you think I’m exaggerating the extent to which the Commissioners were generally on the side of the lobbyists at that meeting, listen here to Commission President Jessica Levinson talking about how too much regulation will put lobbyists out of business. Sheesh!

■ Jessica Levinson thinks no one reads the disclosures anyway, so what difference does it make?

But I suspect that if you’ve made it this far down in this post, if you’ve made it through year after year after year of my obsessing over the ways and means used by the zillionaire power elite of Los Angeles to get their way on every weird little whim of theirs, you’ll know that I read those reports. I suspect that many of the readers of this blog do as well. Please let Jessica Levinson and the rest of the Commission know that you do. Again, send your comments to ethics.policy@lacity.org roughly before October.

Image of Jessica Levinson at the head of the post is ©2017 MichaelKohlhaas.Org. It’s a transformatively modified version of this image.