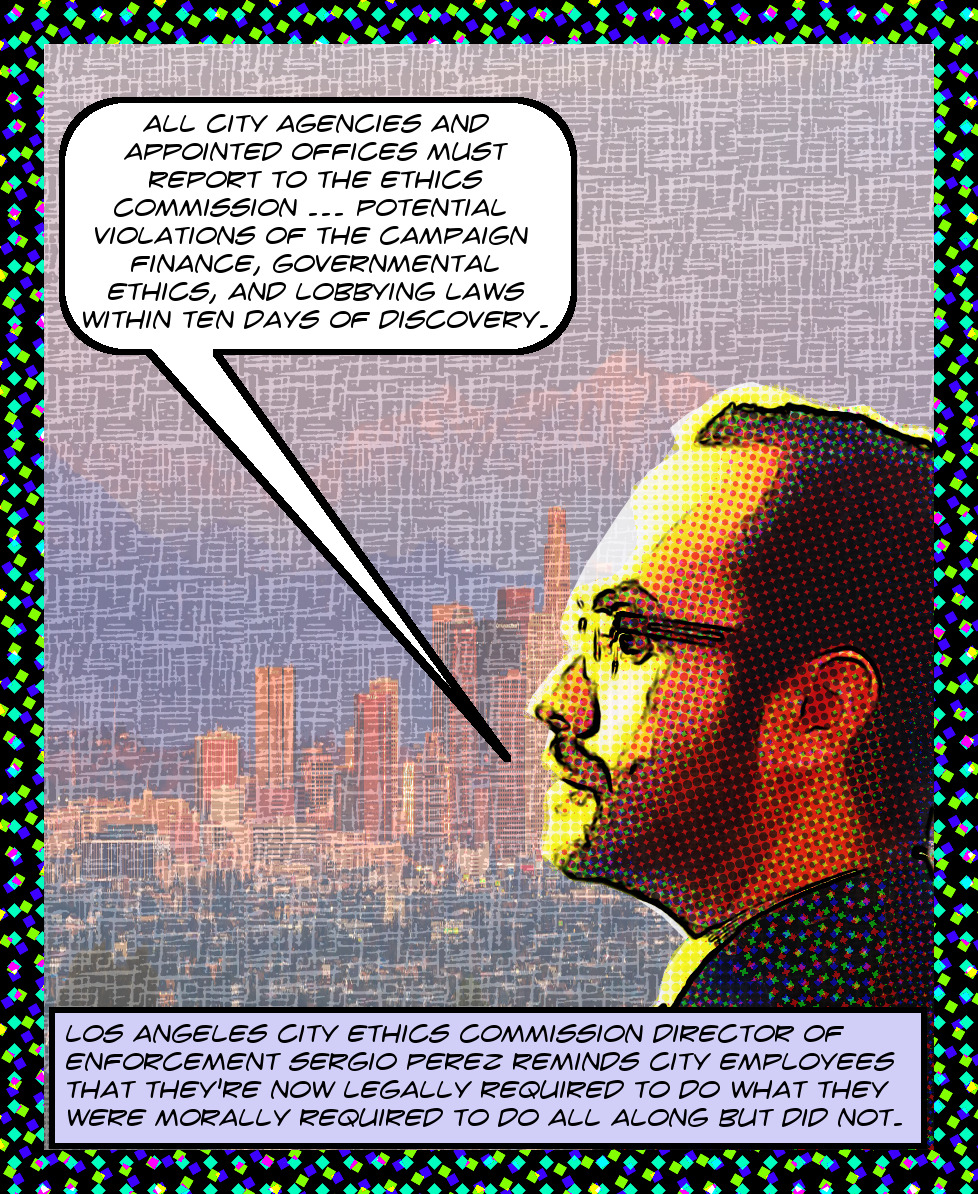 The Los Angeles Ethics Commission is charged not only with enforcing ethics laws and regulations but also with reviewing and revising them periodically. Because the City Council is subject to these laws it wouldn’t make much sense for them to be able to alter them at will. The temptation to exempt themselves and their creepy zillionaire buddies would ultimately be too much for their corrupt vestigial little senses of morality to bear and we’d end up without any ethics laws at all.

Thus the process, as described in the City Charter at §703(a), requires the Ethics Commission to propose the changes and gives the City Council the authority only to disapprove but not to modify them.1 This strikes me as a quite clever way to balance the competing interests involved:

The commission may adopt, amend and rescind rules and regulations, subject to Council approval without modification, to carry out the purposes and provisions of the Charter and ordinances of the City relating to campaign finance, conflicts of interest, lobbying, and governmental ethics and to govern procedures of the commission.2
So at its meeting in February, the Ethics Commission approved a bunch of revised enforcement regulations. You can read the original proposal. This was duly sent up to the City Council, where it was placed in Council File 14-0049-S1. Well, on Thursday, after the Mayor’s concurrence was received, the Council finalized the matter and the new regulations are approved and will take effect on August 14.3

There were bunches of changes, mostly technical in nature, and beyond my capacity to evaluate. But the one that really excites me is that the new ordinance requires City departments and appointees to report violations of the Ethics laws or the Municipal Lobbying Ordinance within ten days. This is a huge development! Read on for details and for a number of horrific instances in which the lack of a mandate to report created absolutely nauseating scenarios involving law-flouting lobbyists and City officials.

Here’s the new duty-to-report mandate in its entirety:

Sec. 19. Subsection (e) is added to Section 24.29 of the Los Angeles Administrative Code to read as follows:

And there are any number of cases from the last couple years alone in which this law would have been useful. Here are a few of them.

Marie Rumsey quit her job as Mitch O’Farrell’s Director of Corrupt Real Estate Developer Contribution Encouragement4 in 2014 and proceeded to serially violate the Revolving Door Ordinance by lobbying the City on behalf of the Central City Association of Los Angeles.5 In December 2016 she was fined more than $7,000 by the Ethics Commission for this. And did any of her former colleagues, all of whom knew or should have known that she was breaking the law, report her? It’s hard to tell for sure, but the Ethics Commission’s enforcement report on her case doesn’t mention anyone reporting her.

And here’s the nauseating part, or one of them, anyway. Not only did Marie Rumsey lobby the City Council by actually speaking before them on any number of occasions, not only did not one single Councilmember turn her in, but on November 17, 2015, when she was smack dab in the middle of her restrictions, she gave a public comment on LAMC 56.11 and Herb Wesson, smarmy little anti-genius that he is, not only didn’t turn her in to the Ethics Commission, he publicly smarmed all over her, saying “Ms. Ramsey, [sic] welcome home, good to see you.”

And then there’s Lisa Schechter. Once upon a time Director of Pernicious Municipal Nonsense for termed-out has-been Tom LaBonge, but beginning in September 2015 director of the Hollywood Media District BID. Also, subject to the Revolving Door Ordinance, she nevertheless started right in lobbying the City against RVs in her BID. Her violations were so egregious that, it seems, David Ryu’s staff refused to cooperate with her law-flouting. However, as commendable as the non-cooperation of David Ryu’s staff might be, their reporting her to the Ethics Commission would have been more commendable still. Now they’ll have a positive duty to report.

The stories could go on and on. Just read through the Ethics Commission’s enforcement reports and try (in vain) to find one instance of a violation that wouldn’t have required one or more City employees to report the violator. But even more promising is the apparent fact that it should now be possible to report not only the lobbyists, the revolving door violators, the illicit campaign contributors, but also to report the City functionaries who didn’t report them. Good times!