Watch and listen here1 to an interminable discussion at last Tuesday’s meeting of the Board of Directors of the Central Hollywood Coalition2 about how to pay the increasing cost of the armed BID Patrol while, at the same time, maintaining or expanding dedicated “homeless outreach” services, also provided by Andrews International. In particular, staff is asking the board to approve a 5% increase in the A/I budget for next year to cover salary increases and so on.

Here are some numbers. A/I pays its BID Patrol officers $31.50 an hour.3 Almost certainly the BID is paying A/I significantly more than that. Also note that base pay for A/I unarmed officers is $13 per hour. In other words, armed officers cost about 2.5 times as much as unarmed officers. If A/I’s markup to the BID is a percentage of its HR costs then this ratio will hold constant regardless of what the BID is actually paying.4 Now, most BIDs in the City of Los Angeles do not have armed security. In fact, as far as I can tell, the two HPOA BIDs run by Kerry Morrison are the only BIDs that do.5 We have written before about Kerry Morrison’s disturbing and utterly disproportionate love of guns, and that’s probably enough to explain her insistence on armed security despite the high cost.6 And the cost is very high. According to the Sunset & Vine BID’s 2015 independent audit, the BID paid $805,608 for security out of total annual expenditures of $1,542,735.7

And what do they get for that? It’s explained in this exchange from last week‘s meeting.8 It’s essentially four dedicated officers per fourteen hour day, backed up by officers from the Hollywood Entertainment District, with slightly less on Sundays. Assuming 8 hour days, and not adjusting for Sundays, this is 11,648 hours per year.9 Dividing this into the 2015 security expenditure yields a rate of $69.16. The 2013 contract between A/I and the HPOA gives the markup rate as 82% for BID patrol officers and 55% for supervisors, so this is roughly consistent with a base hourly rate of $31.50.10

So what is the BID patrol meant to accomplish? Well, according to the Management District Plan, what the BID wants from the BID Patrol is that it

…will patrol the entire District and will be responsible for coordinating the District’s activities with the Hollywood Division of the Los Angeles Police Department (LAPD) and the City Attorney’s office to deter crime, initiate citizen’s arrests when necessary, warn and advise trespassers and panhandlers, and respond to pedestrian inquiries. The intent is to provide a level of security service and visibility above and beyond what the City is able to provide through its police services.

Note what they’re supposed to do to panhandlers:11 They are supposed to advise and warn them. And this isn’t advise in the sense of discussing life goals12 and so forth. It’s advising them about the facts of life, e.g. if they don’t get up and scoot East of the 101 they’re going to get arrested.

And what are they in fact getting from the BID Patrol? Well, here is Joe Mariani explaining about their new homeless outreach officer, which, says Joe, is necessary because “nobody’s doing dedicated outreach, really, in this area, which is a loss for us.” And how important is it? Paying out actual money from their actual security budget for a glorified social worker? Well, it is really, really, really important, it turns out. More important than gunmen. here is Kerry Morrison laying it on the line:

I personally would be willing to see some of our armed officers’ hours curtailed. This is actually the most…not *the* most important, it’s a very important thing right now because we have so many people out there that need to be engaged, and it’s not the best use of our guys’ time, nor are they particularly effective when they’re in uniform. … But I think they [Andrews International] would be willing to work with us if we couldn’t do the full five percent and we wanted to do the dedicated homeless outreach person in 2017 and if we had to cut back on some of the patrol hours there’d be a way to do that.

Kerry Morrison is famous, of course, for her homelessness-linked obsessions. Some big foundation is buying out a bunch of her time so she can make a documentary about homeless people in Hollywood. She blogs interminably about homelessness and so on.13 And what she’s showing us here is that her imaginary-Mother-Teresa syndrome has finally overwhelmed her sense of duty to her actual job, her actual employers.14 As shown above, the point of having a BID Patrol is to enhance security. It’s not to provide homeless outreach. And the Management District Plan cited above is not some meaningless theoretical report, to be ignored at will. In fact, it’s mandated by the Property and Business Improvement District Law of 1994 section 36621, under which BIDs are established. Obviously a BID has to substantially adhere to what it writes in that plan, which is meant to provide some means of oversight into where all the money goes.


And these twin obsessions of Kerry Morrison’s, homelessness and guns, are draining the BID’s resources to the point where, like crack addicts haunting the streets looking for cars with expensive stereos to break into, the BID is looking for money to feed its addiction. Watch and listen here as weaselly cockalorum Drew Planting15 wonders if they can’t somehow get a bunch more money to pay for all of these expensive goodies, armed officers and dedicated homeless outreach workers:

Well, Drew, we here at MK.org discussed this in detail at our last staff meeting, and we have a suggestion for you: Cancel the goddamned armed BID Patrol. They scare everyone except people who don’t have the sense to be scared of a bunch of armed pseudocops. They must not be necessary to the real-life mission of a BID or else at least one other BID in Los Angeles would have them, and they cost a freaking fortune. If you all switched over to unarmed security like EVERY OTHER BID IN LA, you would immediately get 2.5 times more patrol hours. Then you wouldn’t need to hustle around looking for radios in your aunt’s house to sell to your dealer “additional revenue” to fund what’s clearly a very bad habit. 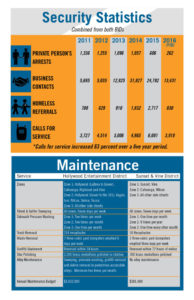 In fact, speaking of very bad habits, let us consider these aspects of the whole armed BID Patrol slash homeless outreach situation in yet another context. As we’ve seen, the BIDs’ fixation on armed patrols and homeless outreach is costing them more money than they have. Also, in service to this strange addiction they are abandoning their earlier promises and core goals.16 What could be worse? Well, they’re also lying about it to their mom the property owners in the District. Look here at the web page of their Annual Property Owners Meeting in August 2016 (or at the graphic reproduced somewhere near this sentence if the link is broken).

In particular, note that from 2014 to 2015 their business contacts, a core function of the BID Patrol, dropped by more than 22% even as their homeless outreach contacts increased by 48.3%.17 Most crucially, note that they claim that the BID Patrol performed 606 private persons arrests in 2015. This is the same number we reported in March 2016. The problem arises when you look at the actual detailed breakdown for 2015. In that spreadsheet you will see that the total of 606 arrests includes 293 so-called alcohol referral arrests. Well, these are called arrests, and they’re given arrest report numbers by the BID Patrol, but as we demonstrated conclusively in May 2016, these are not actual arrests at all. They consist of nothing more than BID Patrollies with guns telling people to pour out their beers and be on their way. They give them an arrest report number but no one gets arrested.

However, there they stood in August telling the property owners who pay their salaries and the salaries of their BID Patrol officers, that they arrested twice as many people as they actually did arrest.18 And why did they arrest so few people last year? Well, we are certainly happy to take credit for it, but, you know, it might just as easily be due to Kerry Morrison’s obsession with having her BID Patrol act like amateur social scientists even though they do not have the first idea what they’re doing and have been known to abuse their power in surreal parodies of actual social work instead of doing what they’re paid by those very property owners to do, which is to

…patrol the entire District and will be responsible for coordinating the District’s activities with the Hollywood Division of the Los Angeles Police Department (LAPD) and the City Attorney’s office to deter crime, initiate citizen’s arrests when necessary, warn and advise trespassers and panhandlers, and respond to pedestrian inquiries. The intent is to provide a level of security service and visibility above and beyond what the City is able to provide through its police services.

So the BID spends more money than it has on BID Patrol guns and outreach, the BID ignores its duties to chase after guns and outreach, and the BID lies about the effects that its obsession with guns and outreach is having on people who rely on it to do very specific jobs: make business contacts and provide actual security to businesses. It sounds like addiction to me. It’s too bad that the City Clerk’s office refuses to oversee BIDs in any way. It seems like it’s past time for an intervention. Perhaps the BID renewal will be a good opportunity to stage one. We shall certainly see!

Transcription of some of the relevant remarks:

Kerry Morrison: Describe what the current team is for Sunset. The manpower. One and a half cars?

Steve Seyler: There’s two 6 a.m. officers and two that come on at noon throughout the week including Sunday. Now, we actually have a 6 a.m. car, we never used to. And then we have extra officers floating in and out between here and there19 wherever we feel a need, you know, it might be a Wednesday, we have something going on, we’ll have an extra car, you know, just as it goes. But there’s always four guys stretched through the day, and they’re backed up by the Hollywood cars.

KM: And how many are in Hollywood?

SS: Um, two 6 a.m., a sergeant, who could be assigned either to Sunset or to Hollywood that day at 6, so there’s five officers in the morning total. I kind of look at it as the two support each other. And then oftentimes we’ll have a bike team or something come on at ten and then two or three teams at noon, including a sergeant.

KM: One of the things we’ve been bringing up in starting the BID renewal discussions is that we really do feel Sunset needs more resources. It’s the same physical size with far less security.

Images of Kerry Morrison and Drew Planting are ©2016 MichaelKohlhaas.org. Image of Dr. Strangelove appears here courtesy of the all-American principle of fair use.