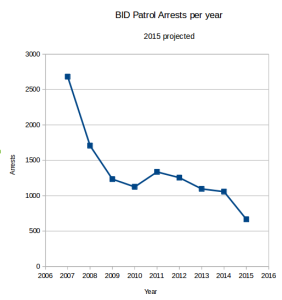 Following six years of essentially level arrest rates (1184 per year on average) between 2009 and 2014 inclusive, as of November 2015 the Andrews International BID Patrol was on track to make only 665 arrests in Hollywood last year.1 This represents a 36.99% drop, which is exceedingly unlikely to be due to chance.2 Long-time readers of this blog will recall that in December 2014 we discovered that on October 10, 2014, the very day after my first visit to a BID meeting of any kind, Steve Seyler wrote to Kerry Morrison, stating:

“I apologize for unloading on you. You have enough worries and I will not be another one. I just had a moment of frustration. We will hold the line here. I am going to have the Officers slow down a little more until we get a handle on this new development. I promise to return from Vegas with renewed hope and a positive attitude.”

I don’t think it’s unwarranted at all for us to take full credit for this welcome development. It’s quite reasonable to assume that, due to nothing more than our intense scrutiny, we’ve prevented around 400 arrests of homeless people on trumped-up charges. This has also saved the taxpayers of Los Angeles quite a bit of money that the LAPD would have spent processing these unfortunates, but I have not figured out a way to estimate this. Any ideas? What I really wonder, of course, is: If it was this easy to get the BID Patrol to arrest 400 fewer people than the year before with no noticeable change in the ambiance of Hollywood, why were they arresting so darned many people all those years? For nothing.

This is the first item on the list of our victories that I’m in the process of compiling.