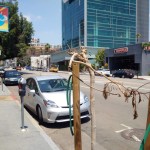 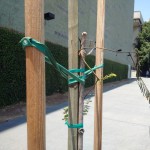 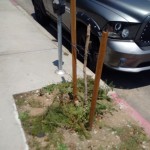 As you can see from the images to your right, the Vine Street Tree Vandal is still at large and hard at his dastardly work as of today, May 19, 2015. One of these three-in-a-row vandalized trees on the west side of Vine Street between DeLongpre and Sunset was hit just last week. What we have here is more than just a crime spree, more than just a peasant revolt against the ham-fisted idiocy of the Andrews International Security BID Patrol, it is in fact an indictment of the BID Patrol’s very competence. The big brass at Andrews will blether on about their self-proclaimed excellence in privatized facism, but when it comes to an actual ongoing crime spree they’re quite evidently helpless.

They claim to have the blessing of the LAPD, but they’re clearly too busy making obscene hand-gestures and pimping around with hot lady cops at parties to actually protect the authentic property interests of their employers. They refuse to arrest some of the real criminals and can’t arrest the others. One wonders what the HPOA is paying them $1.5 million a year for. Oh, yeah… It’s to oppress black people. At least they seem to be good at that nasty little job.

Images of vandalized trees on Vine Street are ©2015 MichaelKohlhaas.org.