See Sarah Besley, Carol Massie, and Kerry Morrison discuss the Vine Street tree vandal. Tree vandalism is antisocial and upsetting and the suspect should be arrested and tried, but why this zeal to charge it as a felony? The fact that the BID is talking to a prosecutor, who’s “willing to work with them,” about upping the charge even though the amount of damage hasn’t yet hit the required threshold evinces a lack of respect for the law and suggests that the BID has public officials willing to bend the law on their behalf. As far as we’re concerned, these BID folks are all serial misdemeanants for their Brown Act violations. Their victims don’t have prosecutors willing to even charge the BID people, let alone “work with them” to twist the law around to charge them as felons, even though their crimes affect quality of life in Hollywood far more than tree vandalism does. The vandalized trees might be beams in the eye of the vandal, but the BID has a forest in its own eye, which it evidently can’t see for the trees.
And look how amazed they are that anyone would mess with their trees. As Charles Dickens remarked about the French Revolution, its initial aristocratic victims spoke of the terror “as if it were the only harvest ever known under the skies that had not been sown—as if nothing had ever been done, or omitted to be done, that had led to it.” That the members of the Sunset-Vine BID Board can be so shocked that anyone might destroy their trees, that it doesn’t even occur to them that someone might harbor a grudge against them and take it out on their trees, says much of their arrogance, their privilege. 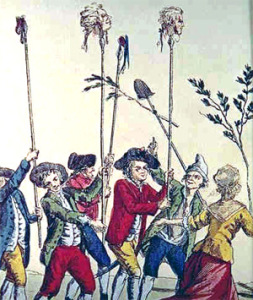 They use their influence with prosecutors to overcharge crimes that offend them. They send armed men to target whole demographic segments of Hollywood in an attempt to make them live elsewhere. Other hard men, abetting violations of state law, keep the BID’s targets out of the very meetings where decisions about them and about their neighborhoods are made. Better severed treetops than severed heads, eh?