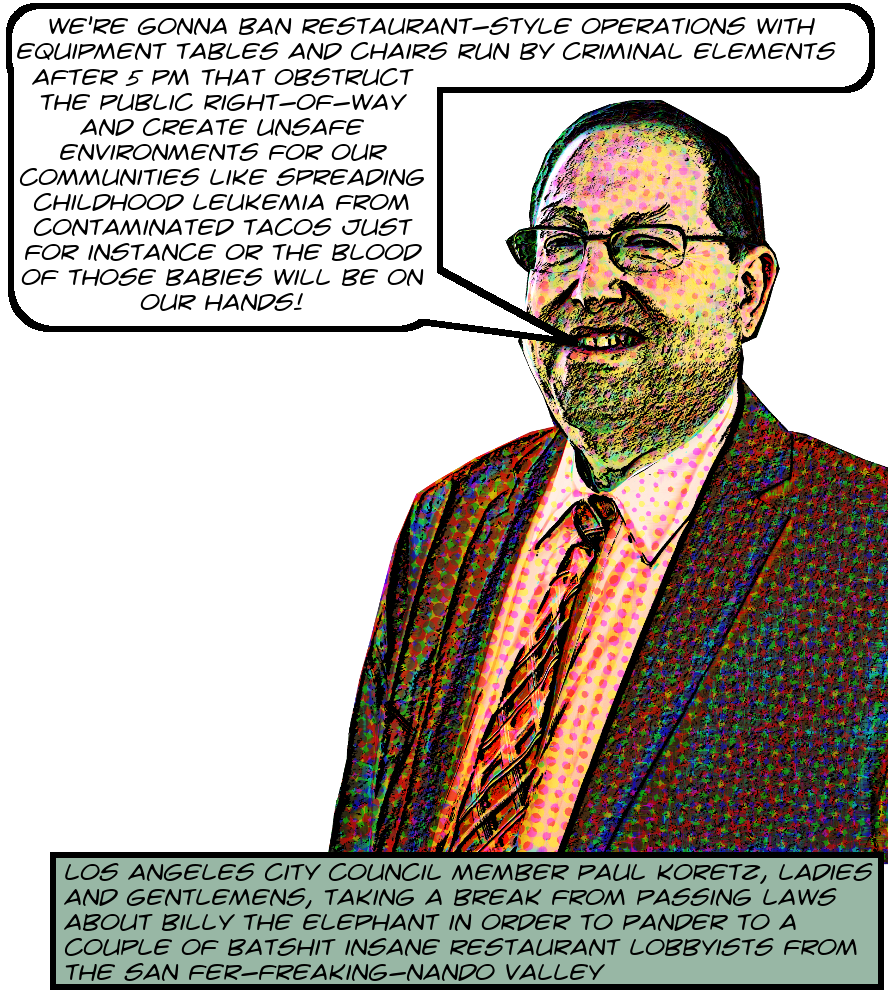 Maybe you remember how in June and July 2019 the Los Angeles City Council was considering renewing the appalling LAMC 85.02, which makes vehicle dwelling illegal? And dozens of advocates for the rights of the unhoused took time to appear and give public comment urging the Council not to renew the law. They stayed away from work, from family, from the countless obligations and responsibilities that unpaid volunteers have to neglect in order to participate in civic life.

And the City Council ignored their wisdom, their experience, their sincere and deep understanding of the facts, they ignored the fact that not one single public commenter spoke in favor of their wicked ordinance, not one. They voted to renew their reprehensible legal ban on vehicle dwelling and then, when the chamber erupted in protest, the Councilmembers first had the police arrest one member of the public and clear the rest from the room. They then assuaged their own fully justified guilt and shame by telling one another the soothing lie that the protesters were paid for their advocacy? Well, anyway, that’s what happened.

And maybe you also remember that for the last eleventy seven years or so the local zillionaires have been fighting rabidly against street vending in Los Angeles, weaponizing the municipal power they pay so dearly to control through many violent conduits against these helpless workers. Their psychopathic campaign got so out of hand that last year the State Legislature had to step in and pass a law forbidding municipalities from outlawing vending.

But there are some loopholes, or at least some language that can be made by zillionaire lawyers to appear enough like a loophole to serve their purposes for now, and the zillies have been hard at work chipping away at the protections afforded by the law to the vendors, telling blatant lies when it serves their wicked purposes.. And it seems that one of the things away at which they’re determined to chip is food vendors who actually cook on stoves and stuff, and maybe have some chairs for their customers.

If you live in actual real live Los Angeles instead of some kind of collective zillionaire delusion like the Pacific Palisades, which almost certainly doesn’t actually exist in normal reality, this is the kind of thing you see every day, or at least every evening, when they really come out in numbers. Pupusas, tacos, pollo rostizado, churrascos, and so on. This is a ubiquitous style of street food vending. Street vending, even complex setups like these, are an essential part of the cultural fabric of Los Angeles, and are to be celebrated, not outlawed.
END_OF_DOCUMENT_TOKEN_TO_BE_REPLACED