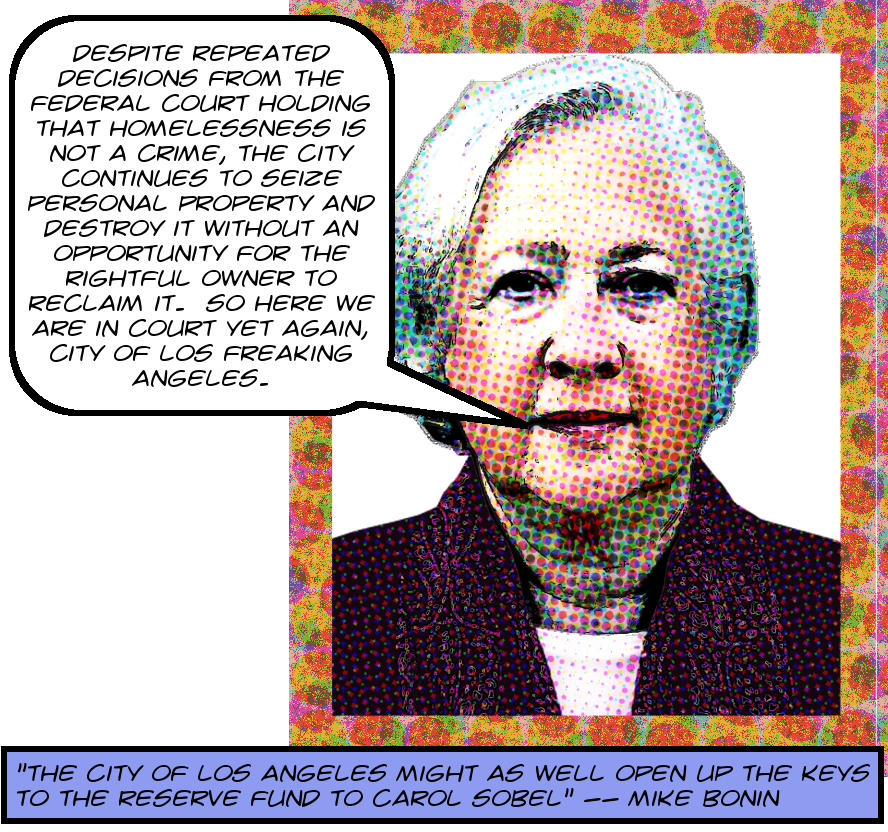 On September 3, 2018 Carol Sobel filed suit in federal court against the City of Los Angeles, alleging that Rex Schellenberg, a homeless man living in the San Fernando Valley, stepped away from his property briefly only to have it confiscated and much of it destroyed by the LAPD and LA Sanitation personnel. I can’t find anything about this case in the media, in contrast to Sobel’s other pending case on the matter, Mitchell v. City of LA, which is covered extensively. You can read and get copies of the pleadings here on Archive.Org. I’ll update the collection as more stuff is filed.

The facts of the case are simple. Schellenberg, an elderly man homeless in Los Angeles for more than twenty years and disabled as well, lives in the San Fernando Valley. In July 2017 he left his property momentarily unattended to visit a convenience store and employees of the City of Los Angeles summarily confiscated and destroyed Schellenberg’s neatly stored possessions. In its monumental decision in Lavan v. City of LA, the Ninth Circuit had this to say about this practice:

As we have repeatedly made clear, “[t]he government may not take property like a thief in the night; rather, it must announce its intentions and give the property owner a chance to argue against the taking.” This simple rule holds regardless of whether the property in question is an Escalade or [a tent], a Cadillac or a cart. The City demonstrates that it completely misunderstands the role of due process by its contrary suggestion that homeless persons instantly and permanently lose any protected property interest in their possessions by leaving them momentarily unattended in violation of a municipal ordinance. As the district court recognized, the logic of the City’s suggestion would also allow it to seize and destroy cars parked in no-parking zones left momentarily unattended.

As with all of Sobel’s writing, the initial complaint makes compelling reading. You can get a copy of the PDF here, or turn the page for a transcription of selections.
END_OF_DOCUMENT_TOKEN_TO_BE_REPLACED