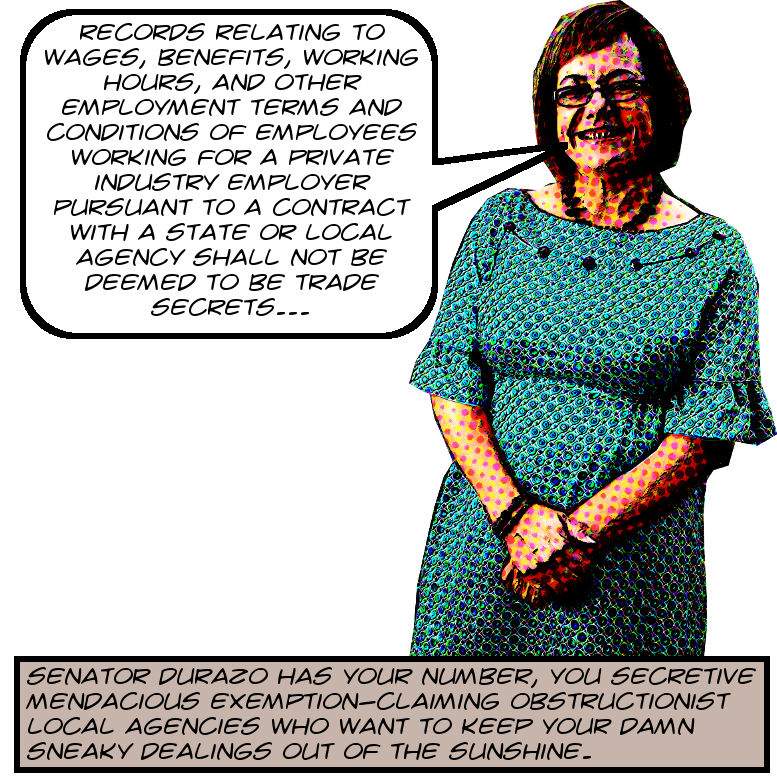 First, it would state that “records relating to wages, benefits, working hours, and other employment terms and conditions of employees working for a private industry employer pursuant to a contract with a state or local agency shall not be deemed to be trade secrets under the act.” In my experience it’s fairly common for local agencies to claim that records like this are exempt. Sometimes they claim that they’re trade secrets1 and sometimes that they’re material found in personnel files.2

That last claim is pretty clearly bogus, so probably the more serious obstructionists rely more on claims of trade secrets. For instance I had this happen to me with the Fashion District BID in the person of Rena Leddy, who refused to tell me the hourly rates of the BID’s renewal consultant, Urban Place Consulting. That is, until a kindly lawyer sent them a not-so-kindly demand letter on my behalf. Then they coughed the goods right up.3 So if the bill passes with this bit intact they won’t be able to do that any more, and the personnel file claim is functionally a non-starter, so that’ll be good.

Incidentally, while I understand the danger of letting the perfect be an enemy to the good, I would still just like to say that the problem being solved here is at best a minor particular instance of a much larger family of problems involving records owned by private contractors who are working for public agencies. That is, that the agencies can write the contracts so that the contractor owns the records and the agency explicitly does not have access to them.

The Hollywood Property Owners’ Alliance famously did exactly this in 2016 with the Andrews International BID Patrol. Kerry Morrison even admitted under oath that the purpose of the change was to thwart my CPRA requests. And the judge ruled that it was allowable under California law for them to do this, and even to make the change retroactive.

But such is not the law in every state. For instance, Florida Statutes section 119.0701 makes pretty much all records generated by private contractors subject to the CPRA if they relate to work done for a public agency. It’s a really powerful, really beautiful statute. We need a version here, and this bill is not it. But it’s not bad.

The second issue addressed by Durazo’s bill has to do with reverse CPRA actions. In these suits a third party, e.g. a police union, sues to prevent a public agency from releasing records to a requester. The Court of Appeal held last year that the third party is liable for the requester’s fees if they lose, and this bill would formalize that finding by putting it into the statute. The bill also requires that the requester be brought into a reverse CPRA action as a party, I assume so that the case can’t be heard without the requester’s input.

And finally, and this may be the most powerful part, the law would forbid a court from ordering that a record be withheld if the order is based on a discretionary exemption. But most of the exemptions are discretionary. In fact I kind of think that all of them are, but maybe there’s something I don’t understand. This clause alone will make it harder to win reverse CPRA actions, as it should be. Turn the page for a transcription of the legislative counsel’s digest and the proposed new statutory language.
END_OF_DOCUMENT_TOKEN_TO_BE_REPLACED