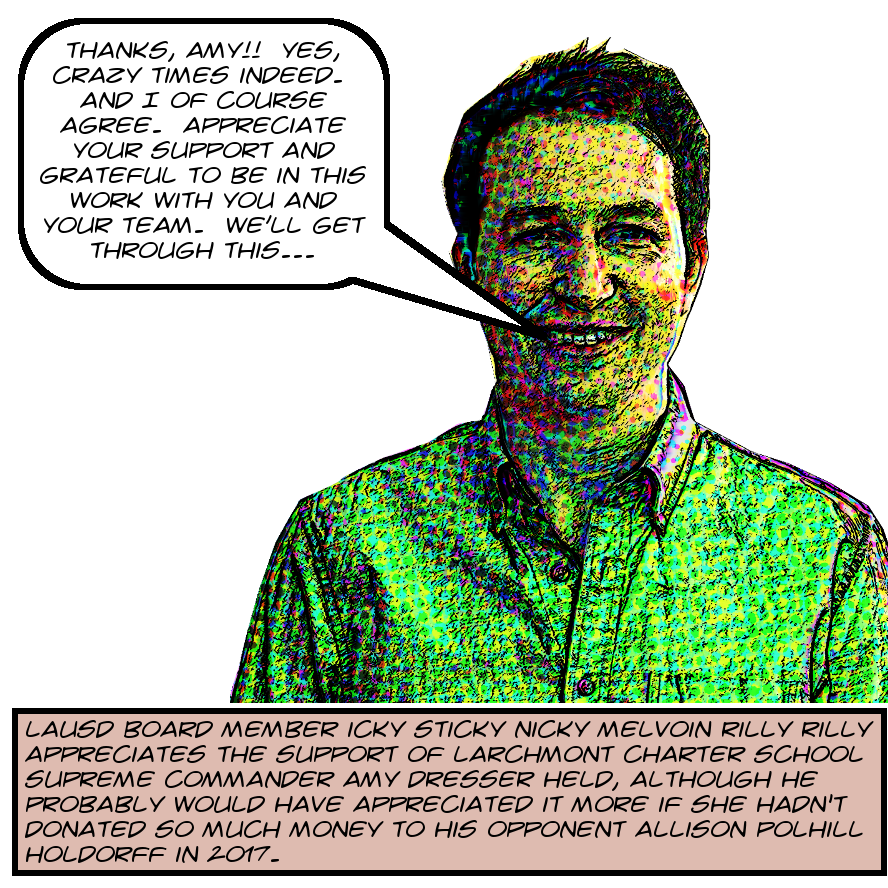 So you probably remember that one of the welcome outcomes of the courageous and world-shaking January 2019 strike against the Los Angeles Unified School District by the United Teachers of Los Angeles was a resolution to be considered by the school board on freezing the approval of new charter schools in Los angeles. This was considered and passed by the board on January 29, 2019, with pro-charter board member icky sticky Nicky Melvoin casting the lone vote against.1 This resolution, not really binding on anyone, is of course but one step in a journey whose ultimate goal is the elimination of charter schools in California.

And you may also recall that recently I obtained a huge, huge set of emails from the thermonuclearesque privatizers at the Larchmont Charter School.2 I used these the other day to write about how Amy Dresser Held, supreme Larchmontane shot-caller, used her publicly funded power and position to hook up some kid she knows privately with an internship with LAUSD in the sticky one’s office.

And today’s story has to do with an email that Held sent to Melvoin in the quasi-early morning of January 29, right before the fatal board meeting, expressing solidarity with whoever and saying a lot of fairly kooky stuff about how she was thinking of Nicky and these were crazy times and thanks Nicky for caring about kids and don’t be bullied into voting for this charter cap crap because to zillionaires political pressure to do what they don’t want equals bullying.

Most importantly, Held states in a remarkably self-contradictory sentence that a charter cap is “the first step in killing charters and there’s no good argument for it.” She is right, of course, that this is the first step in killing charters. Somehow3 she misses the point that this very fact is the good argument for it. And because of that tired nonsense about bread, butter, sides, and so on,4 El Ick-Stick got right back to Held with this little email here. Took him a mere 17 minutes to send this response.5 And he was really feeling it, yes indeed, thanked her profusely!

And because why waste a good email she didn’t just send this email to Nick M. but also to a bunch of his senior staffies, with a slightly different subject line and other minor mods. But their response was much more muted, and I won’t speculate on why that might be.6 Read on, friends, for transcriptions of the Held/Melvoin part of this exchange!
END_OF_DOCUMENT_TOKEN_TO_BE_REPLACED