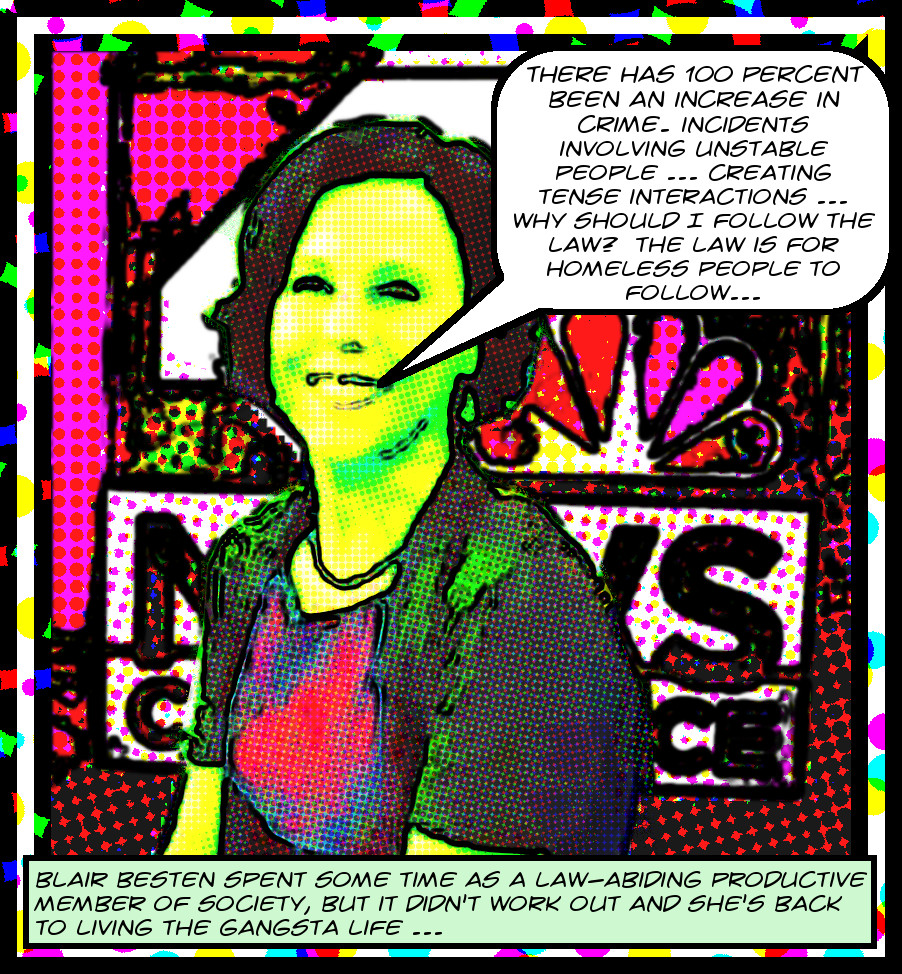 Just yesterday we asked you, our loyal audience, to join with us in a sympathetic moment of silence for Blair Besten, executive directrix of the Historic Core BID, who was forced by circumstances to quit her outlaw ways and follow the law for just once in her professional life.

Well, I’m sorry to have to report that she’s back to living la vida loca on the mean streets of DTLA, unsurprisingly I suppose, as white collar crimes have such a very high recidivism rate. Blair Besten’s attempt at walking the strait and narrow path lasted about 6 minutes short of 24 hours, at which point she busted out in yet another crime spree. Here’s the background: This afternoon, a few of your loyal staff members rode the good old Red Line to Pershing Square to attend the June meeting of the Historic Core BID’s Board of Directors. We filmed the whole thing, if you’re interested.

When we arrived, we were greeted by the BID’s marketing specialist, Paola Flores, who invited us to sign in on the sign-in sheet. We declined, as we always do, and noted that the sheet was in violation of the Brown Act. This was the first (and least important) of three violations, the technical details of which along with the usual slew of goodies you shall find after the break.
END_OF_DOCUMENT_TOKEN_TO_BE_REPLACED

When I set out to write this blog, I never imagined that the actual mechanics of the California Public Records Act would become such a big topic. However, it has indeed turned out that way, and for a number of reasons. Mostly it’s because I got really interested in the way the law works as well as in the benefits it provides. It turns out, also, that a lot of people read this blog because they’re interested in CPRA as a thing-in-itself. And finally, it turns out that my victims the objects of my attention, both BIDs and City, have become a whole lot more stubborn about handing over the goods, which leaves me to fill what might otherwise be holes in my publishing schedule due to sporadic document-production gaps by discussing their stubbornness.1 Anyway, somehow or another I learned of a workshop that BID-buddy Blair Besten‘s BID, the Historic Core BID, once co-sponsored with a bunch of LAPD and County DMH flunkies about craziness amongst the homeless downtown.2 So I asked Blair Besten to send me the goodies, and some time later, she sent me this set of 16 pages of emails. It turns out to mostly not be that interesting, although Blair Besten’s idea of what ought to be redacted is pretty cracked. For instance, you can see in the image that she redacted some guy’s whole name and then didn’t redact his first name in the very next paragraph. Is her hiding the fact that some guy named Andrew emailed her so much in the public interest that it’s obviously exempt? If so, why didn’t she cross out the very next instance of it?

And, as you can see, for whatever reason, Blair Besten has made a dedicated pseudonymous email address for responding to CPRA requests. It’s publicrecords@historiccore.bid, and she and her flunky Paola Flores use it interchangeably.3 This turn to pseudonymity seems to be a common instinct amongst those feeling hassled by their duties under CPRA. South Park has done it, the HPOA has done it, CD4 did it, and even the City of Los Angeles has flirted with the idea. It’s important for the sake of maximizing interhuman communicativity to identify one’s correspondents and converse with them under their actual names. Fortunately for the sake of meeting this goal, CPRA actually forbids anonymity under some circumstances. Take a look at §6253(d), which states in pertinent part:4 END_OF_DOCUMENT_TOKEN_TO_BE_REPLACED