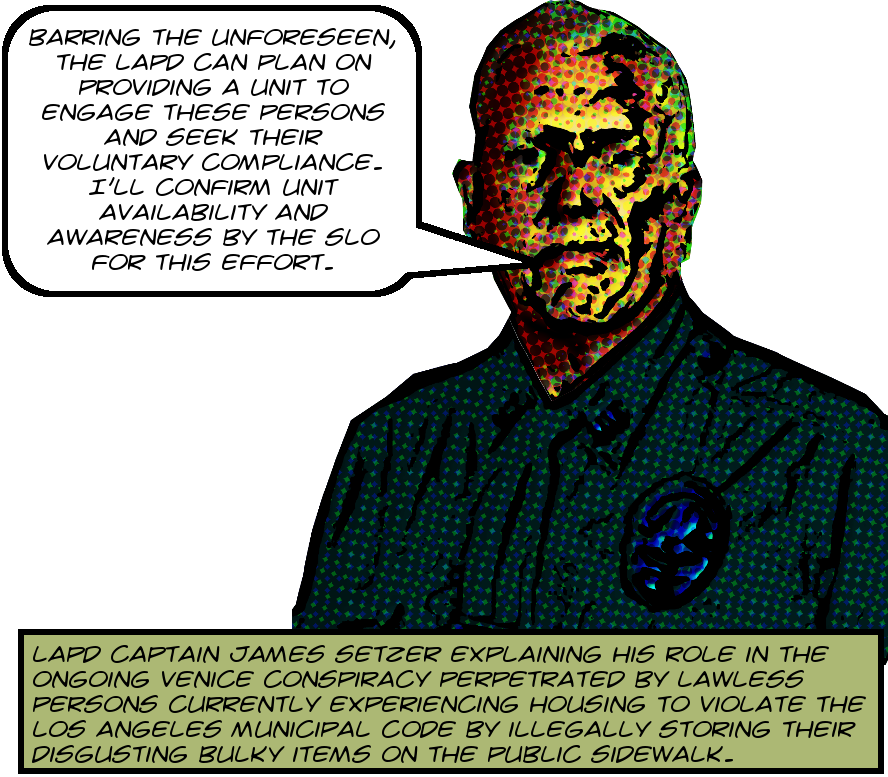 Recently I obtained some emails which proved that the Los Angeles Police Department was complicit in the placement of illegal anti-homeless planters in Venice. Officers coordinated with local housedwellers to remove homeless encampments in order to facilitate planter installation. You can read that story here.

The planters are illegal for a number of reasons, but two interesting laws being violated in this context are LAMC 56.11 and LAMC 56.12. LAMC 56.11 is, of course, the famous anti-homeless ordinance banning the storage of so-called bulky items on public sidewalks. The other section, LAMC 56.12, requires property owners or other people in control of property1 to keep adjacent sidewalks free of unpermitted obstructions.

Not only that, but LAMC 11.00(m) states that “[e]very violation of this Code is punishable as a misdemeanor unless provision is otherwise made…” It turns out that LAMC 56.11 does make another provision, so that violation of that section isn’t a misdemeanor, but this isn’t the case with 56.12. If a property owner allows unpermitted planters to stay on the sidewalk they’re committing a misdemeanor.

And it’s even worse than that. LAMC 11.00(j) declares that “[w]henever in this Code any act or omission is made unlawful it shall include causing, permitting, aiding, abetting, suffering or concealing the fact of the act or omission.” That is, not only does LAMC 56.12 forbid property owners from leaving the planters in place, it actually forbids any person from “permitting, aiding, abetting, [or] suffering” the planters to remain.

So when the police do nothing about the planters, they’re actually violating LAMC 56.12 themselves. And per 11.00(m) this violation is a misdemeanor. So it’s really much worse than it would be if LAPD officers were merely complicit in other people’s violations of the law, which is already intolerable. They are themselves violating the law.

It is intolerable to have police, given extraordinary powers up to and including the power of killing people in the service of their goals, violating the very laws they’re sworn to enforce. So I wrote this complaint against all the police I know to be involved and sent it to LAPD Internal Affairs, asking them to investigate the officers and punish them if appropriate. Turn the page for some transcribed selections and stay tuned for updates!
END_OF_DOCUMENT_TOKEN_TO_BE_REPLACED