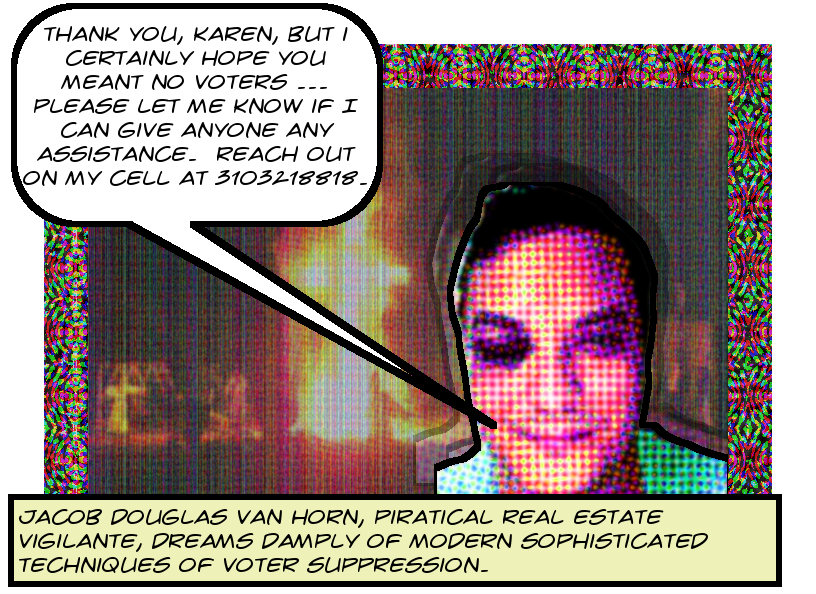 With all the recent revelations about how Estela Lopez ran United Downtown LA’s finances and how she used her official dlanc.com email address to send out an anti-SRNC email blast and how she and a bunch of her asshole buddies on the DLANC board seem to have lied to President Patti about their involvement with this shadowy anonymous gang, with all that, as I said, it may be easy to forget that these co-conspirators aren’t just a bunch of slavering zillionaire cannibals, blithely using their razor-sharp fangs to crack the bones of their victims that they may joyously slurp up the marrow and then slaking their thirst with long noisy draughts of the steaming blood of their prey. They’re that and so much more!

They’re also, it turns out, a band of jovial jokesters, merrily bantering with one another while they stir their witches’ brew. It being a lazy Sunday afternoon, I thought I’d take some time out from the hard-hitting journalistic salvos my loyal audience craves and look at one of these humorous moments. After all, one doesn’t know one’s enemy until one knows what they find funny.

Here’s the story, then. Recall, if you will, that all these conspirators were vying with one another to set up pop-up polls in the days leading up to the SRNC formation election. Emails were flying both thick and fast about who had gotten a new poll, who had hauled all their tenants off to vote at a poll, and so on. Now comes Karen Christopherson, some kind of real estate drone with a shadowy company known as A.I. Management, which seems to be the boss of an office building at 420 E. 3rd Street in Little Tokyo.

On April 3 at 1:05 p.m. she fired off this little number, announcing that she was having a pop-up in her building and that she’d instructed security to validate parking for the event. Look carefully for the joke, cause it’s easy to miss! (And there’s a transcription after the break, of course).
END_OF_DOCUMENT_TOKEN_TO_BE_REPLACED