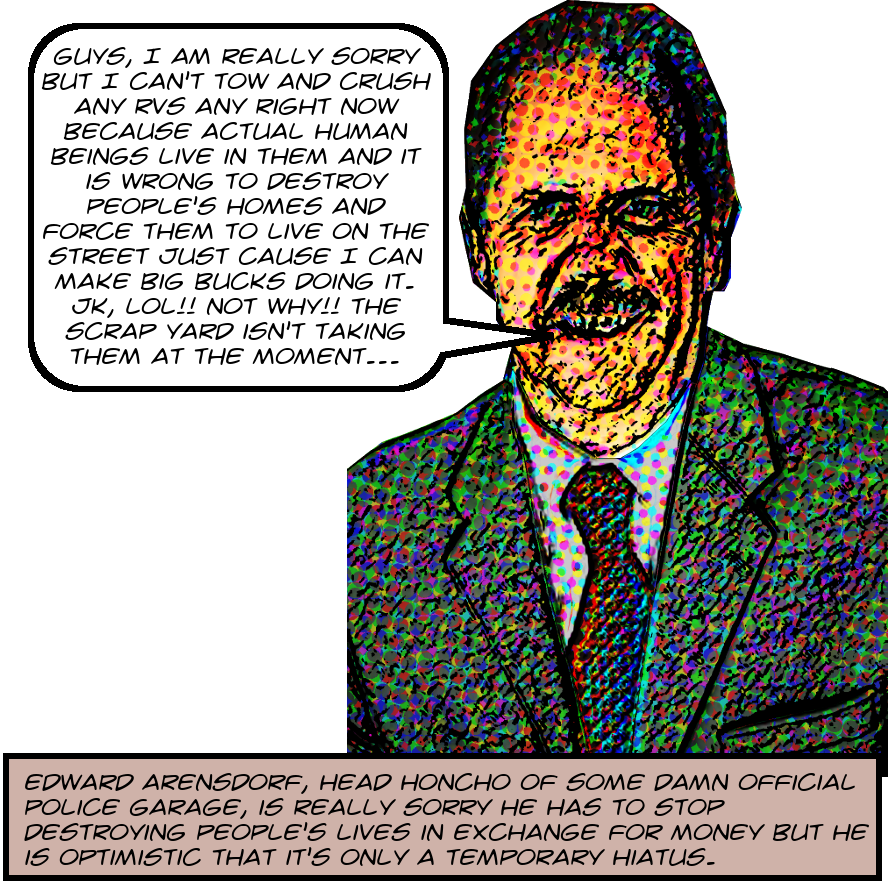 I learned recently that the City of Los Angeles opposed a bill banning poverty tows in California for no better reason than that one single lobbyist asked on behalf of his clients, the Official Police Garage Association of Los Angeles, Herb-Wesson-appointed interim CD12 representative Greig Smith to oppose it, stating that his clients couldn’t do so publicly because to do so would expose them as the greedy bloodsuckers that, in fact, they actually are.

As pointed out by the incomparable folks at KTown For All this is an example of one single person determining official policy for a City of four million people for no better reason than to keep diverting zillions of dollars of public money into his clients’ coffers. And today I have a small related story, but an important one, showing not only an unexpectedly granular level of complicity between the tow companies and the City government with respect to RV towing, but some hints about the volume of RV tows and also the scale of the infrastructure required to tow and ultimately destroy motorhomes.

It begins with a May 23, 2019 email from Ed Arensdorf, general manager of OPG Keystone Towing, to Colin Crews of CD12, LAPD officer Benjamin Jones, and LADOT staffer Brian Hartman, in which he tells them that he is forced “to put motorhome towing on indefinite hold”. And in case you’re envisioning chaos, vehicular anarchy, Mad Max but with RVs, well, don’t worry, notes Arensdorf parenthetically, this is “(except evidence, stolens and blocking driveways/intersections).”

Which essentially means that they were going to have to stop towing away RVs that people live in but they will keep on towing RVs where there’s actually a defensible reason to tow, rather than displacement and profiteering. And in case it occurred to you, there were no moral considerations at all involved in the towing hiatus. The company that crushes RVs1 was having some regulatory problems with environmental agencies.
END_OF_DOCUMENT_TOKEN_TO_BE_REPLACED