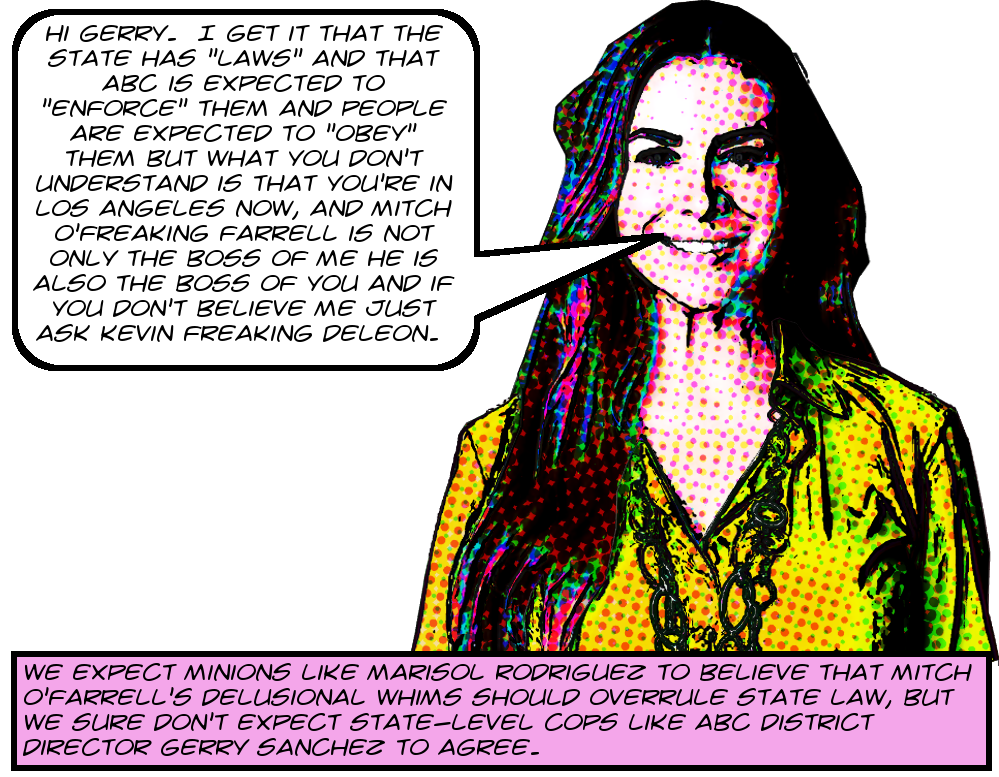 NOTE: The records discussed in this post tell an interesting story. But the story of how I got my hands on these records is also interesting, and you can read it here.

If you’ve spent much time in Hollywood you’ve noticed the wildly popular movie screenings at Hollywood Forever Cemetery. They’re sponsored by Cinespia and have been going on since 2002. These events have been the subject of sycophantic only-in-Los-Angeles style coverage in local news outlets since forever. E.g. in 2015 the L.A. Times explained:

As the smell of popcorn and weed wafted through the air, DJ Ana Calderon spun “Sweet Caroline” and smiling hipsters lined up to snap shots in a candy-festooned photo booth that had been designed by pop artist Alia Penner…

There’s even a cute deejay girl spinning a pitch-perfect assortment of swinging 1960s classics while 4,000 moviegoers trickle their way into the “theater,” picnic baskets, blankets and beach chairs in tow.

“Want some, Dani?” asks the cool mom to my left, extending a plastic cup filled with red wine my way.

Bring your own weed! Bring your own wine! Cute deejay girl! Cool mom! Famous dead people! You can even buy drinks from the bar! What could be more pleasant on a beautiful summer’s night in Los Angeles?! Who could ask for anything more??!

Well, evidently the Department of Alcoholic Beverage Control could ask for anything more. Remember Will Salao? Ultracorrupt former ABC district manager, indicted by the feds for bribery and abuse of authority and probably a federal snitch? It seems that for years Will Salao pointedly did not worry about any problems with the drunk movies at the cemetery.

But his 2017 replacement, putatively new broom and special agent in charge Gerry Sanchez, immediately noticed something funny about these events at the Cemetery that evidently had been just fine with bribe-accepting Will Salao. They were breaking the damn law by letting people bring booze in, or at least Gerry Sanchez thought they were breaking the law, or maybe it was a regulation. No one ever seems to have identified the specific law they were breaking. And he did what seems to be his job and told them that it was against the law for people to bring their own alcohol in to the movie screenings and they would have to stop.

And you can guess what happened next, right? The cemetery bitched and moaned and complained to their elected representatives and so forth but then the LAPD and the City government stepped up in favor of everyone following the damn law! We’ve seen how diligent they were in conspiring against nightclubs on Hollywood Blvd, for instance, with LAPD, CD13, and City Planning teaming up to get them all shut down on the basis of obsessively compiled lists of violations. So why wouldn’t they defend the law in this instance as well? You remember the law, don’t you? It’s that thing we’re all equal under.

Actually, nope. It seems that when you’ve got 4,000 palefaced happy hipsters swilling wine and smoking weed on the lawn things work very, very differently from situations with a different color scheme. In this case, rather than spending years trying to shut down the putative violators with every creepy cop trick known to the power elite, CD13’s Marisol Rodriguez, the LAPD’s Julie Nony, and Baydsar Thomasian of Kevin DeLeon’s office basically swarmed special agent in charge Gerry Sanchez and yelled at him until he gave up and decided to let the cemetery continue breaking the law. That is, if there even was a law broken.

And then, because the guy’s no hero, he spent the next few days whining about it to his superiors instead of honoring the oath he took to defend the law. Or instead of realizing that no law had been broken and owning up to that. Either way, the guy’s a loser, but then we already knew that. Turn the page, of course, for every last detailed piece of this no-heroes-involved story, told, as usual, by means of transcribed emails.
END_OF_DOCUMENT_TOKEN_TO_BE_REPLACED