This month Los Angeles activists were forced to think a lot about film permits. First the extraordinary Ktown For All broke what turned into an international story about the City shutting down a COVID test site at Union Station to accommodate a film shoot.

Then less than two weeks later Streetwatch LA member Ian Carr broke the story that an entirely different film company had somehow arranged for a large encampment in front of City Hall East to be swept away in advance of their shoot. Twitter user @publicownedbus also provided valuable info, and then ace Knock LA reporter Cerise Castle also wrote about this incident.1

On December 1, then, I started using the California Public Records Act to investigate. It turns out that FilmLA is a private corporation but their contract makes them subject to the CPRA, so I fired off a request and a couple of days later, after an inordinate amount of pushback from an inordinate number of City offices,2 I received the Union Station permit and wrote a post about it.

In the process of this investigation I ended up learning a lot of interesting things about film permits, how to get copies of them, and what can be learned from them,3 which I thought I’d share with you today!

First let’s talk about how to get copies of permits. They are all available at https://ops.filmla.com/. You can get there from their home page at https://www.filmla.com/ through the menus at the top: For Filmmakers ➙ Online Permit System 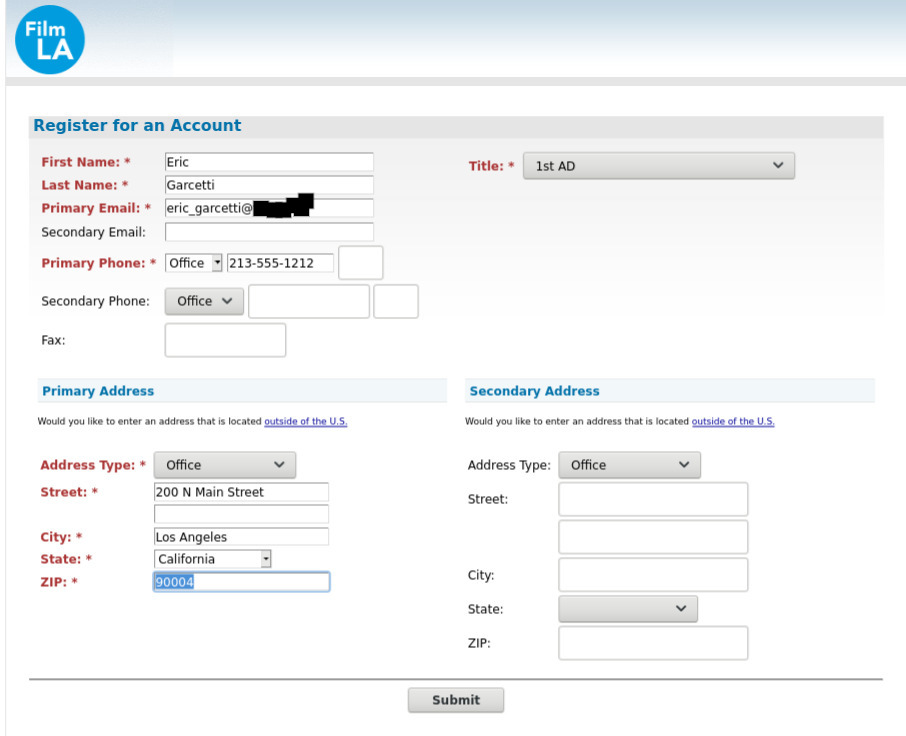 Once you’re in you’ll find that it wants you to register an account, and the account registration page has a long list of required fields asking for a bunch of personal information that no one wants to give up to the government easily.4 It doesn’t matter, though. Just make stuff up, although you MUST use a real email as that’s how they validate accounts, which happens immediately. If this part worries you make a new Gmail account just for it. They don’t communicate with you after you’re validated so throw-aways are fine.

The next thing to do is hit the Permits tab at the top and from there go to Finalized Permits and you’re in! 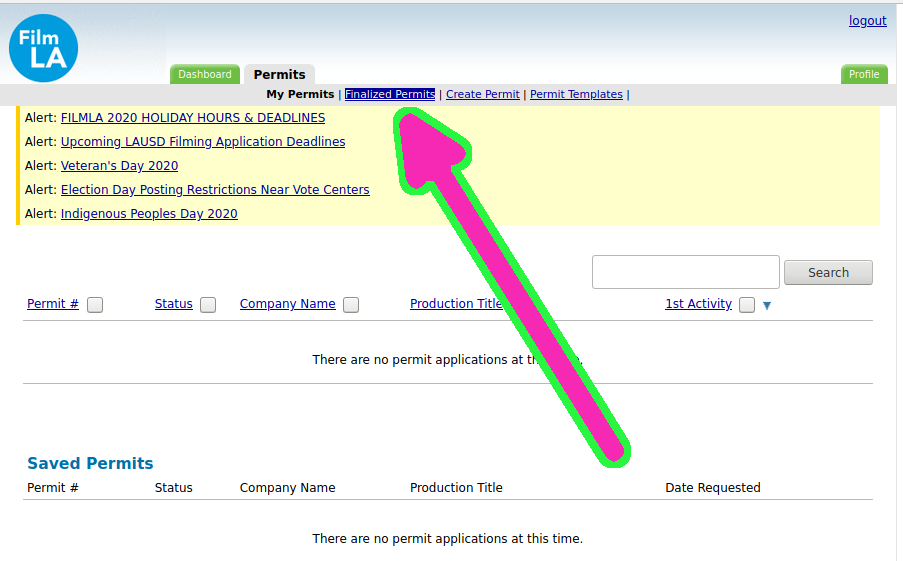 They only list thirty entries per page, which is problematic for some purposes but doesn’t matter here. One huge drawback is that they have a two day embargo on new permits, so you cannot use the website to get permits for future shoots or even on the day they’re shooting.5 So one can’t get current or future permits. What to do, then, if you come across a problematic shoot and you want to know who’s involved, who the key personnel are, their contact information, and so on.

Well, in some cases you’re not actually out of luck! Most productions need more than one day of filming, and FilmLA’s permit website has a pretty reasonable search function. If you can learn the name of either the production company or the thing they’re filming, you can search for earlier but very recent permits for the same production. The search thing confused me a little because it doesn’t work unless you check off the field to search in, but I figured it out eventually. 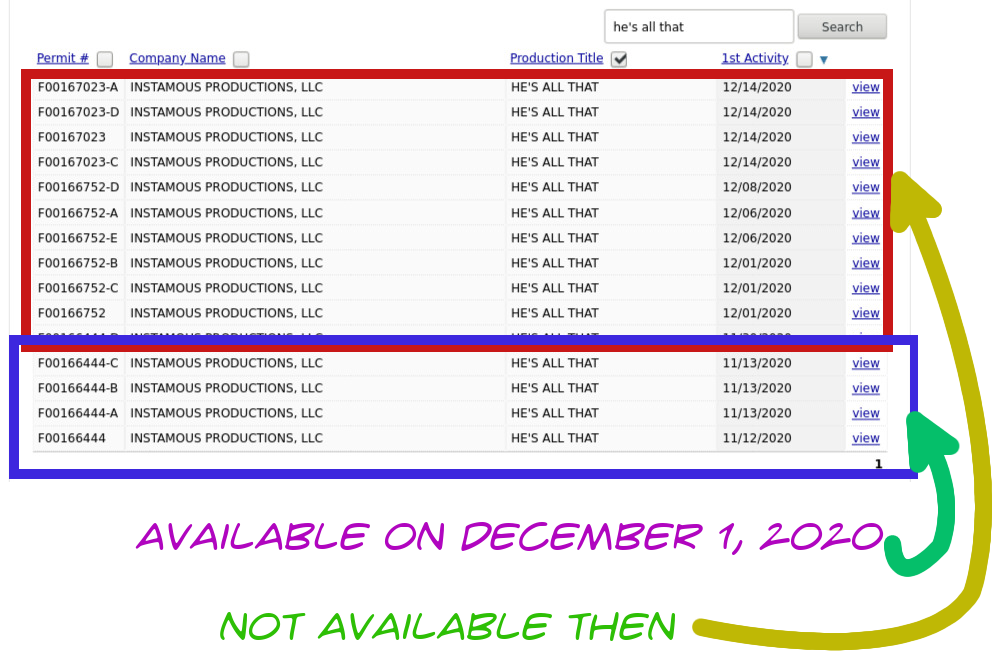 Find the permit for an earlier shoot on the same production, like two days earlier, and you’re good. Also, one single permit covers multi-day shoots at the same location. If the one you’re interested in has been there for two days or longer you’ll find their actual permit by searching. And once you have it, what can you learn from it? Well, all kinds of stuff!

For instance, maybe you have questions or comments about what’s going on at the shoot. Maybe you want to call someone involved and ask them your questions or share your comments. So you need contact information, and these permits are full of that! So for instance, the location manager on the controversial day was Dave Conway. But the most recent permit available on December 1, 2020 was for November 13, 2020. And the location manager? Still Dave Conway.

I hope you find this practical information useful. As I mentioned above, when the pandemic ends and in-person record inspection is safe, it will be possible to go to FilmLA’s office in person and demand to see and copy all the embargoed permits, from yesterday into the future however far they go.

Sure, maybe it’s not necessary to wait. One could ask FilmLA to hand over embargoed permits, and I would even say that the CPRA requires them to give them to you. But without the added pressure of in-person inspection they won’t do it promptly, I can guarantee. Ask for tomorrow’s permits via CPRA and Paul Audley will gladly email them to you two days from now, when they end up on the website.

This is a ploy, both popular with obstructionists and maddeningly effective because perfectly legal, about which nothing can be done. But for now, if you need to get in touch with a production company because their shoot is displacing homeless people or otherwise disturbing the natural order of the universe, this is a way to do it!