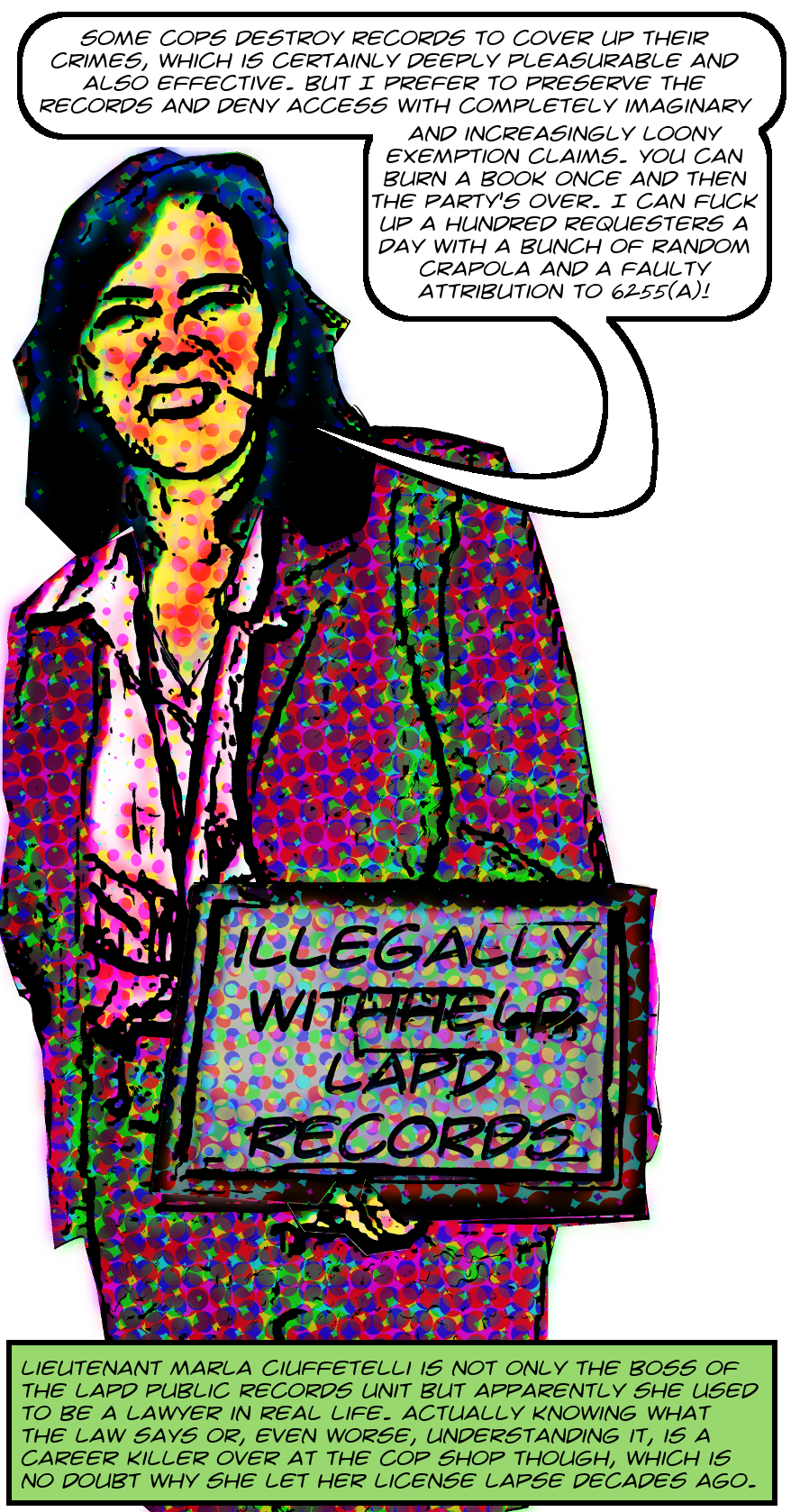 In 2017 the ACLU of Southern California sued the Los Angeles Police Department over their habitual egregious violations of the California Public Records Act. The City settled the case in September 2019 by paying the ACLU $57K and signing an extensive agreement which included a number of conditions regarding LAPD’s CPRA practices.

One of the conditions requires LAPD to use a web platform for handling CPRA requests, to publish the requests so that they’re searchable, and to publish records produced as well. The full text of this clause is transcribed below. The City addressed this requirement by adopting NextRequest, but so far LAPD has failed to publish requests consistently, and even when they do publish them, they often won’t publish the released documents or the conversation with the requester, both of which the settlement requires them to do.

In particular, at the time of writing, requests 19-4413 and 19-4414 remain unpublished and the released documents remain unavailable and unsearchable for anyone but the logged-in requester. It’s essential that LAPD publish all published requests, but I have a particular interest in these two given that recently LAPD Chief Michel Moore publicly accused me of making requests that “are intentionally designed to be unclear, confounding, and/or overbroad.”

The evidence Moore cited is based on these two requests, which are none of the things he accuses me of intentionally designing them to be. So a couple weeks ago I asked LAPD Lt. Marla Ciuffetelli, new boss of the CPRA Unit, to publish them. She has so far completely ignored my request1 despite the fact that LAPD is subject to a court order requiring publication and despite the fact that the requests are themselves public records, which I requested.

But one of the other clauses in the agreement says that LAPD officers who willfully violate the CPRA may be subject to discipline. So yesterday I filed this complaint against Ciuffetelli with Bryan Lium, her superior officer, which is also transcribed below.2 I am sure that as they usually do they’ll kick it around for a year or two and then exonerate Ciuffetelli, but maybe not. In any case, I will certainly let you know what happens!

Transcription of complaint against Ciuffetelli:

I am submitting a complaint against Lt. Marla Ciuffetelli (34964) for violating department policy with respect to the California Public Records Act as enshrined in the Department Manual at §406.30 and as agreed to by the City of Los Angeles and LAPD in the September 2019 settlement agreement in Winston v. City of Los Angeles. This settlement agreement is appended for your convenience and appears below as Exhibit 1 on page 3.

The settlement at Paragraph 3(c) explicitly requires LAPD to publish all requests received via the NextRequest platform. On August 11, 2020 I called Ciuffetelli’s attention to this fact via email. See Exhibit 2 on page 17. Also on August 11, 2020 I asked Ciuffetelli and her subordinate, Detective Kris Tu (34895), to publish two specific closed requests, namely 19-4413 and 19-4414. See Exhibit 3 on page 19. So far she has refused to do so even though the terms of the settlement require it.

The settlement at Paragraph 3(b) requires all requests to be publicly available for search as well. When requests remain unpublished the search function of NextRequest does not include them in its results. As an illustration of this see Exhibit 4 and Exhibit 5 on page 21 and page 23 respectively. The first screenshot shows the result of searching for the phrase “reporting district 111” while logged in and the second while logged out. Since I made the requests they appear for me when logged in. Since Ciuffetelli refuses to publish them no one else can find them.

Finally, these two requests are public records. My asking Tu and Ciuffetelli to publish them is a request for access to these public records. The Department Manual at §406.38 requires department supervisors to act on requests for public records by providing copies if they’re readily available. These two requests are readily available to Ciuffetelli as she’s the supervisor of the unit that is responsible for operating NextRequest. She could, and still can, publish these requests with a single button-click. Thus her refusal to do so violates Department CPRA policy as well as the terms of the ACLU settlement.

Thus Ciuffetelli violated and continues to violate the terms of a court-ordered, court-monitored settlement. She also violated the explicit requirement of the Department Policy Manual to release requested records immediately if they’re readily available. These violations are not technicalities, they’re not trivial. Ciuffetelli’s transgressions violate my constitutional right to have public officials comply with the California Public Records Act. They also violate the public’s right to have access to all CPRA requests to LAPD. Finally, Ciuffetelli’s refusal to comply with her legal obligations exposes the Department to significant legal liability.

Because I advised her of the settlement terms and because she supervises the unit responsible for complying with them her violations cannot have been inadvertent. Therefore according to Department policy she may be subject to discipline:

A Department employee who willfully withholds Department records or information relating to a CPRA request or willfully violates any other obligation under this policy may be subject to discipline.


Please investigate this matter and subject Ciuffetelli to appropriate discipline based on your findings. Regardless of LAPD’s determination with respect to Ciuffetelli’s culpability, please arrange for LAPD’s CPRA unit to begin complying with its legal obligations by publishing all CPRA requests immediately.

Transcription of relevant clause from the settlement agreement:

The City will maintain an online public records portal that enables members of the public to do the following as it relates to CPRA Requests to LAPD:

Image of Lt. Marla Ciuffetelli is ©2019 MichaelKohlhaas.Org and of course…