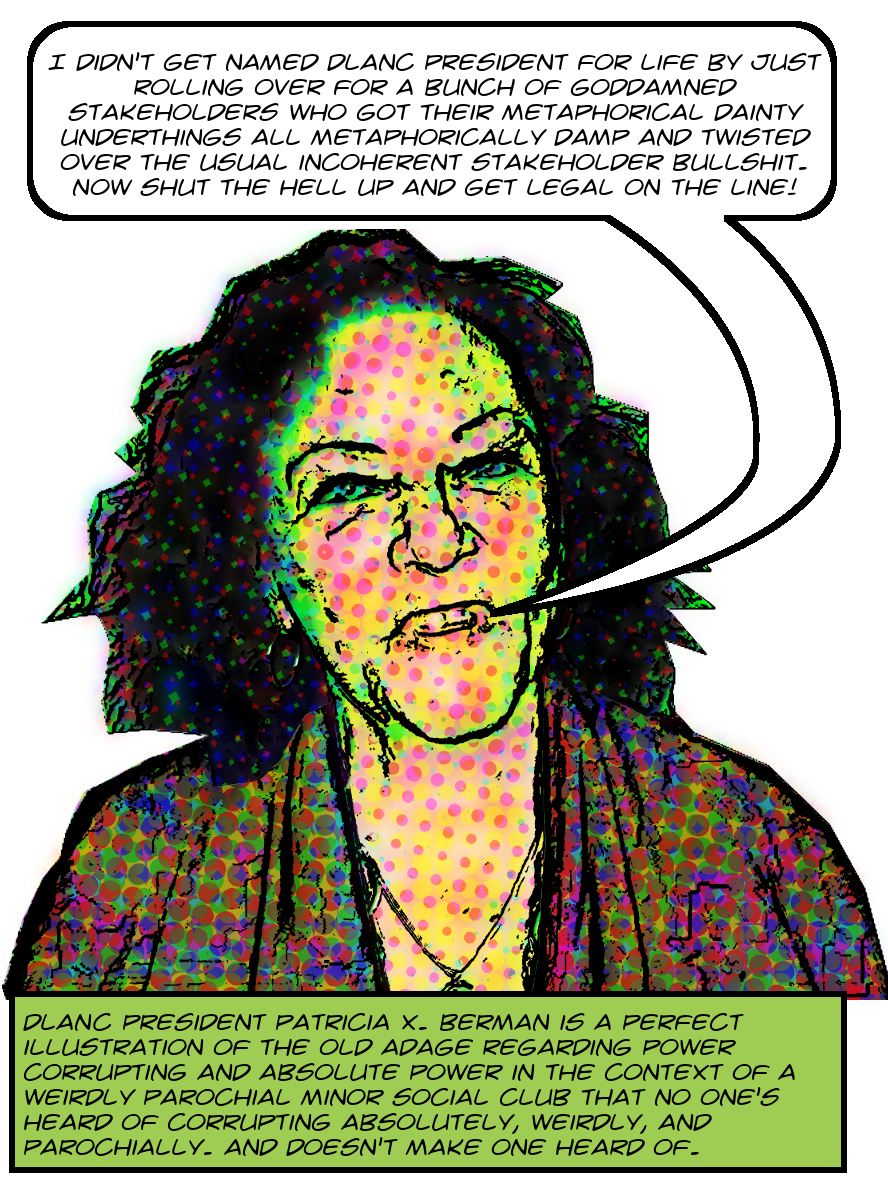 This story is in some sense about the absolutely intransigent refusal of Patti Berman, president for life of the Downtown Los Angeles Neighborhood Council,1 to comply with the California Public Records Act. I’ll spare you the details of her violations for now,2 but they’re weird, unnecessary, and secretive. And she leads other board members into violating the law by rephrasing requests so that they can’t actually comply. It’s really bad, and DLANC records are really important,3 not least because they violate the Brown Act all the damn time, often4 via email.

But DLANC matters to me, and it has since they went to such horrific lengths to scuttle the Skid Row Neighborhood Council formation effort. So it occurred to me that, rather than moving straight to yet another lawsuit against the City of Los Angeles, I might give a presentation to the DLANC Board on Berman’s violations, on how she induced violations from other members, and some suggestions on how to comply with the law while also significantly reducing the work and time involved in responding to requests.5

And the DLANC bylaws actually contemplate exactly this scenario. Right there in Article VIII §2 it says, as clear as clear can be:

The language here is mandatory. It’s very clear that on receiving a written request from a stakeholder the secretary will refer it and either a committee or the full board will consider it. Oh, by the way, I’m a DLANC community interest stakeholder, which I established over two years ago in relation to this grievance against DLANC board member and anti-SRNC conspirator Dandy Dan Curnow.6 So I submitted a proposal to DLANC secretary Claudia Oliveira via email:7
From: [mike@michaelkohlhaas.org] Date: June 29, 2020 at 7:50:23 PM PDT
To: Claudia Oliveira <claudiaoliveira.DLANC@gmail.com>
Subject: A request to present to DLANC’s executive committee

I am writing to request that the Executive Committee reserve a time at an upcoming meeting for me to present some ideas about improving DLANC’s process for responding to requests for public records. I believe that the procedures currently used are both out of compliance with the law and, ironically, also create a lot of unnecessary work for board members forced to respond accordingly. I imagine I will need three or four minutes to outline the problems and make a few suggestions. Of course I’ll be happy to entertain as many questions as you all would like to ask me. Please let me know the details.

Thanks again for your willingness to further this discussion!

But instead of actually agendizing it as required Oliveira forwarded my email to Berman, and Berman’s response was characteristically weird:

From: patti.berman@dlanc.com
Date: July 1, 2020 at 11:59:47 AM PDT
To: Claudia Oliveira <claudiaoliveira.DLANC@gmail.com>
Subject: RE: A request to present to DLANC’s executive committee

I mean, what the Hell, right? They don’t even have a “legal”, whatever that obviously ripped straight from some weirdo movie term means in this context. And there’s nothing in the bylaws about any of this. It’s conceivable that the bylaws don’t require them to let me speak outside of public comment, but they certainly do require the matter to be agendized and considered.

I mentioned this to Oliveira, who told me in her characteristically cheerful and actually helpful way that she couldn’t help me although she thought my request was totally reasonable and useful:

Sorry this is so difficult. I don’t have IT access to post agendas not am I involved in the agenda making process. So I referred it to her and that was the answer I got. I can’t put it on the agenda myself because I have no access or I absolutely would!

You are always welcome to do public comment, but the reason I think a presentation would be better is because at public comment we’re not allowed to ask questions and you only get two minutes which I don’t think it would be enough.

I think I might talk to our parliamentarian and see if he can talk to her about it. I also didn’t understand what she meant by that. Patti and I work well together in getting things done but many times we butt heads on how to go about different aspects of DLANC. Give me until the morning so I can figure this out.

My apologies again, this should be much simpler.

And now it’s been about three weeks and I haven’t heard back from anyone. So this morning I filed a grievance against DLANC with the Department of Neighborhood Empowerment for violation of bylaws. It’s actually almost impossible to file neighborhood council grievances any more. Take a look at DONE’s grievance-filing web form and see that the list of forbidden reasons for filing is extensive and the time limit is 30 days.

But a violation of the bylaws is an accepted reason, and it’s only been 18 days, so I was good to go! I don’t have a copy of what I filed because they don’t provide one to the filer, but there’s nothing in there that’s also not in this post. Now we wait!

Image of DLANC president for life Patricia X. Berman is ©2020 MichaelKohlhaas.Org and there’s some prequelesque nonsense on the Facebook, which I don’t freaking even want to link to so find it yourself, mmmK?