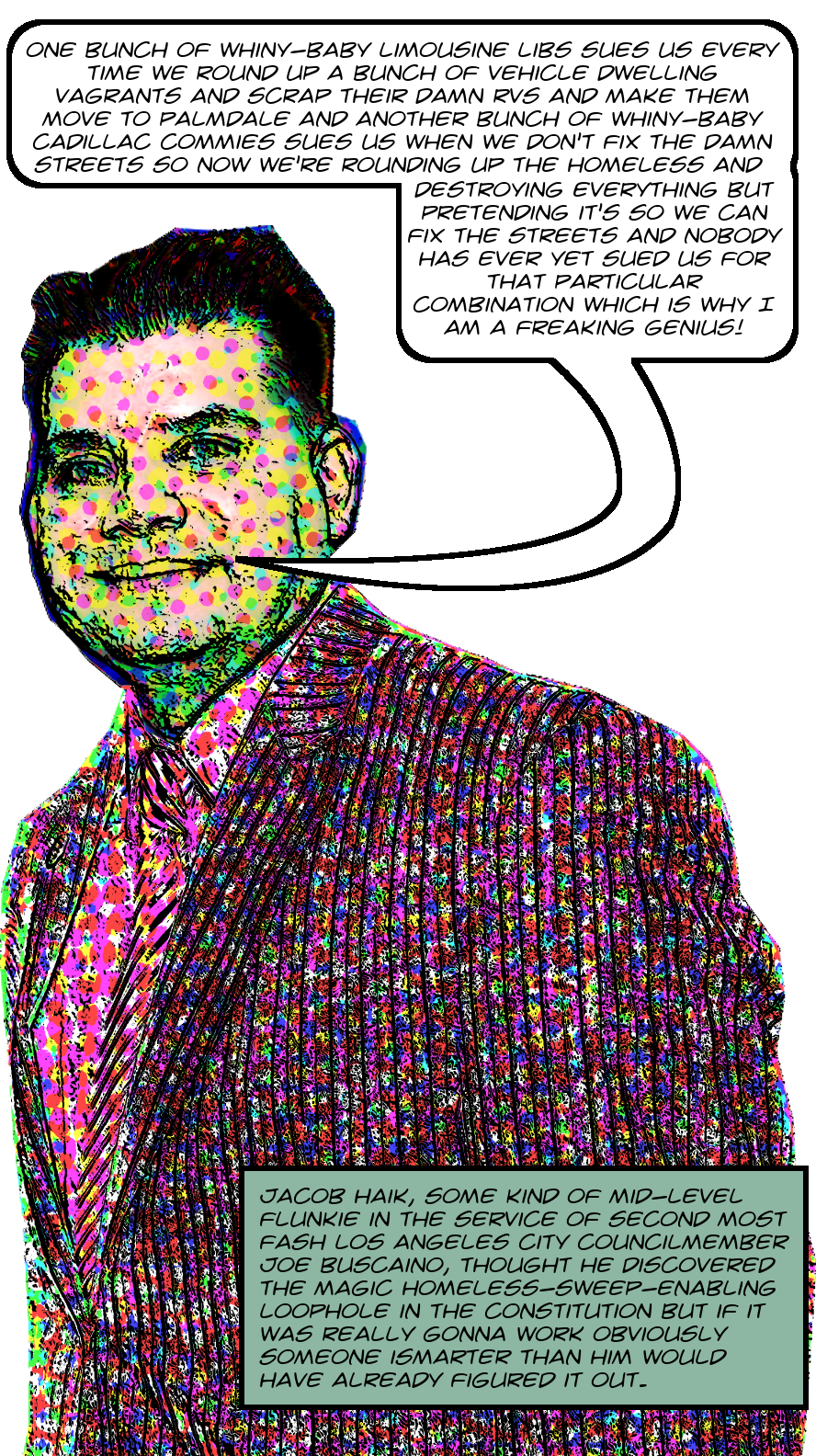 Over the last few days I’ve received a few massive releases of records from Los Angeles Sanitation about homeless encampment sweep authorizations. There’s far, far too much information here for one post but I want to get links published because the information is essential. The records illuminate a number of important issues, not least of which has to do with the sweep selection process.1

For the most part encampments to be swept are chosen by Council District offices, who make selections based on complaints from property owners and probably other reasons too. These records reveal something I hadn’t seen before, though, which is that on its own initiative LAPD can also select encampments to be swept. Here are links to the new material, followed by a story or two gleaned from it.

Like I said, there are a million stories in these releases. Here’s one that happened on April 2 and 3, 2020, when Freddie Nuño of LADOT’s Hollywood parking enforcement office emailed CD13 flunky Hector Vega to get an encampment near their office swept and removed. Vega knows that if you want to succeed as a field deputy you must be able to get this kind of favor done for members of “the City family.”

LADOT parking staff no doubt make the kind of buddies that are extraordinarily desirable to field deputies, who if they know how to fix parking tickets or call in relaxed parking enforcement zones2 for rich supporters of their boss3 have essentially no limit to their career possibilities. And Freddie Nuño is known to be able to pull off these kinds of magic tricks so Vega had every possible reason to want to please him.

So Vega emailed his LA San contact, Bladimir Campos, asking: “Can we redirect the CARE team tomorrow to visit this site as our #1 priority? It’s in Rampart Division but we need the teams to go tomorrow.” But Campos wasn’t cooperating. He reminded Vega that due to the pandemic the City had decided to stop encampment sweeps as of April 3: “per our conversation, I was informed by LSD management that LASAN will stand down on its CARE/CARE+ operations beginning Friday, April 3, 2020.”

It kind of looked like public safety and humanity were going to trump Vega’s attempt at favor-spreading, but he was saved by his CCs! One of them, Primitiva Vidal, some kind of top inspector over at LA San, wasn’t giving up so very easily. She jumped into the active conversation with this: “Let me discuss this concern first to my Chief, Howard Wong, and will get back with you as soon as I have the information.”

And wouldn’t you know it? Howard Wong figured out a loophole through which they could drive a solution! The encampment was on City property so apparently City Council’s moratorium on sweeps didn’t apply: “Please have the CARE team respond, this is a City of LA DOT property, ensure NO Trespassing signs are installed. Refer to SOP Procedure 6.”

And that’s just what they did. And they brought the cops along. And presumably they swept away the encampment even though the City of Los Angeles had very publicly announced that they were suspending encampment sweeps as of April 3. Also, don’t forget that the City claims to have suspended sweeps to protect public health.

Which means that even if Wong’s loophole was real, even if for whatever reason encampments on City property were excluded from the sweep moratorium, the reason for the moratorium doesn’t change if the City owns the land. Sweeps threaten public health no matter where the encampments are located. But people repurpose the tools they have to accomplish their goals.

In this case Vega, Vidal, and Wong apparently repurposed the City’s encampment sweep machinery to strengthen their informal alliances through favor-doing. The people living in the encampment, the disruption of their lives, the threat to their health and to general public health, all of these were less important to these conspirators than their own parochial private purposes.

The next episode has to do with the role of LAPD in targeting encampments for sweeps. Most of the discussion I’ve seen assumes that LAPD doesn’t play an active role. Rather, Council Districts, maybe LAHSA, select sweep targets based on putatively noble criteria and LAPD is just there to protect the sweepers from the putatively dangerous encampment residents.4

But emails show that this is not the full story. In fact LAPD apparently can and does target encampments for sweeps on its own initiative, which I had not previously known. Take a look at this email conversation from January 2020, for instance.5 On January 27, 2020 LAPD officer Francisco Lopez emailed the Unified Homelessness Response Center thus:

Can you please have this location cleaned up.
It’s on Normandie Ave just south of PCH on the west side of the street. I’m also trying to work with Kaiser Hospital staff to assist with the issue. Most of the property is on the sidewalk.

And about 20 minutes later UHRC forwarded Lopez’s request from its generic email account uhrc@lacity.org, which in my experience is controlled by Garcetti flunky Brian Buchner,6 to administrative assistant Josselyne Hernandez instructing her to make it happen. Not a word about why, nor about outreach, nor nothing. LAPD wants it, make it happen:

Please reach out to CD 15 to see when they can get this scheduled.
Thanks.

Hernandez looped in LA Sanitation sweep scheduling supervisor Sarah Bell, who made it clear to Lopez that she was willing to handle not only this encampment sweep but all future ones like it, and that he could just ask her and Gabriela Medina from CD15 without having to go through UHRC:

You can just send these to Gaby and I going forward.

Lopez is agreeable but also says he’s been using 311 for encampment reports, which shows that this is not a unique incident but part of LAPD’s pattern and practice. He’s also illiterate:7
On Mon, Jan 27, 2020 at 11:36 AM Francisco Lopez <38192@lapd.online> wrote:

Sure. No problem. I had been summiting [sic] them via myLa311 to get a confirmation number and track it.

And Gabriela Medina, who is the designated encampment sweep scheduling staffer at CD15, got it put on the CARE schedule for January 29, 2020, which is mighty fast service:

And this location is on the CARE list for tomorrow, 1/29. I sent you the calendar, Frank.

And that brings us to the last story for today, which I already talked about briefly on Twitter last week. It seems that in May 2020, at the height of the still-ongoing pandemic, the Los Angeles Bureau of Street Services was slated to resurface Figueroa Street between El Segundo Blvd and 135th Street. And sure, streets need to be resurfaced, and the southernmost reaches of Figueroa Street, at least in the City of Los Angeles,8 are not the most assiduously cared-for parts of the City’s network of roads.

But every tool is a weapon if you hold it right, and the City’s street resurfacing apparatus is no exception.9 Joe Buscaino staffer Gabriela Medina was quick to note that street resurfacing provides an opportunity to forcibly relocate RV dwellers even if there probably aren’t ordinary legal means of doing so. Thus did she ask BSS staffer Edgar Duncan if they needed all the RVs cleared out to do their work:

We’re looking forward to the proposed work on Figueroa Street, it’s very much needed. However, we wanted to bring to your attention that the segment of El Segundo to 135th Street is very popular for RV’s and illegal dumping, many of the RV’s are non-mobile. We don’t want this to interrupt your work, therefore we will work with our homeless outreach teams, LA Sanitation and LAPD to ensure this proposed work is properly communicated.

The work is scheduled for next Friday, just to be clear, you will need to have that entire stretch cleared from any objects, correct? If so, this gives us time to get our teams out in the field to do the proper outreach.

Duncan agreed that they needed the streets cleared and that RVs could be forcibly removed to facilitate this:

We will need help ensuring all vehicles are cleared from the street so our crews can start the road improvements.

We will pass out additional flyers tomorrow morning within the job limits regarding the start date and scope of work.

And at this point Jacob Haik, Buscaino’s Deputy Chief of Staff, is just thrilled at the potential. After all, it’s damaging enough to tow RVs that people are living in during ordinary times. During the pandemic it’s far worse. But Haik is overflowing with anticipation at what he might be able to do with this, and can’t help but check in with Duncan to see if it’s really going to work:

I love the long stretch of resurfacing, much needed on these streets. Has LADOT been able to ticket and tow the RV’s on other resurfacing projects?

This is a really good example of the way that powerful people can take any public process, means, law, and so on, and subtly or not-so transform it away from whatever people had in mind when it was established10 into yet another weapon to defend their power, to implement their unholy purposes. That’s all for today, but like I said, there’s a ton of essential and very interesting information in here. Take a look at the full releases, and I will write more about them soon!

Image of Jacob Haik is ©2020 MichaelKohlhaas.Org and if you really truly surely muchly bigly gotta have your own copy of what passes for the original then click this damn link right here!