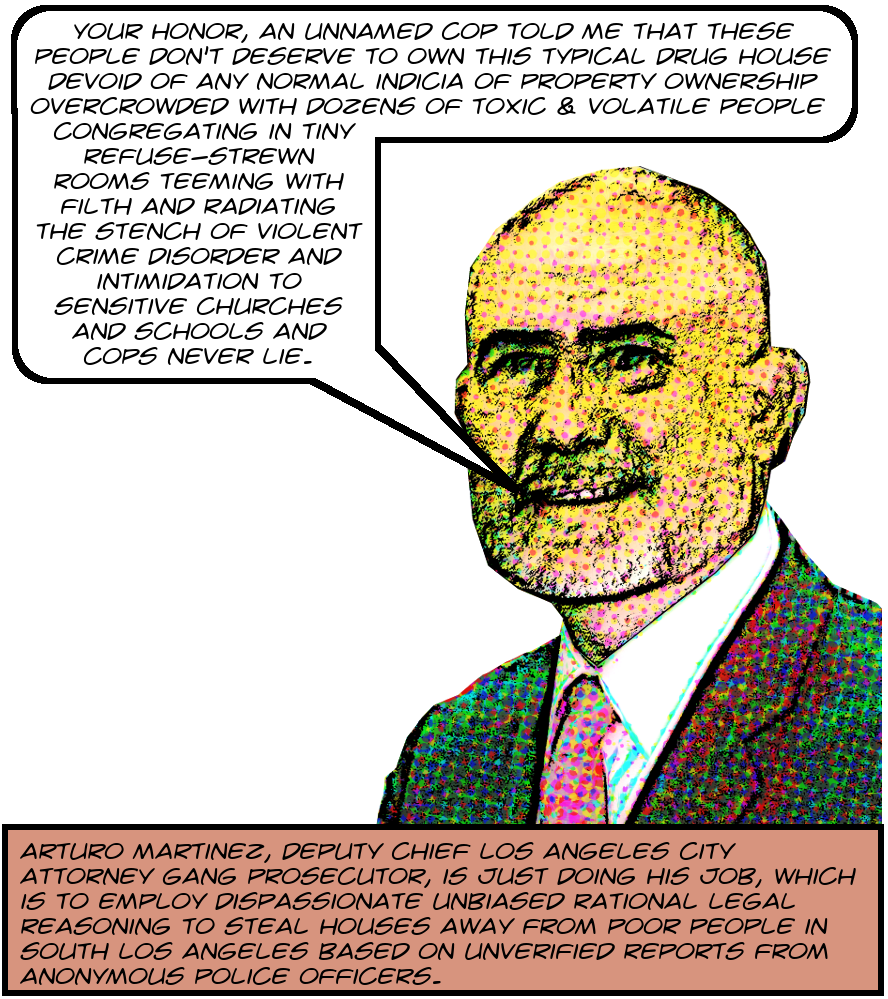 The Los Angeles City Attorney’s Citywide Nuisance Abatement Program ostensibly attacks gang crime by filing civil lawsuits against property owners whose properties are allegedly involved in ongoing criminal activity. And even though there are obviously people committing all kinds of crimes, dealing drugs, shooting guns, hanging out listening to music,1 in houses and apartments all over the City, the vast majority of these suits are brought in South Los Angeles, a significant fraction in East and Northeast LA, and almost none in other areas.

These disparities support the widely held view that nuisance abatement suits are used as an aggressive gentrification tool. The neighborhoods targeted are gentrifying neighborhoods. The settlement conditions, and by far most of these cases settle, support gentrification and displacement by, among other things, forcing property owners to sell or to evict putatively undesirable tenants or to install surveillance equipment or otherwise function as LAPD informants. Most of the cases are brought against owners of single family homes or small multifamily or commercial properties, maybe because they’re less likely to have the resources to defend themselves.2

I’ve had some trouble learning how the City Attorney picks its targets, but recently, Deputy City Attorney Bethelwel Wilson, in an important series of emails, revealed that for the most part they’re chosen as a result of referrals from residents or law enforcement.3 According to Wilson, irrespective of the source of the referral, an LAPD “gang officer’s communication would be sufficient for the DCA4 to open a case on the property.” And the information supporting the case also comes from LAPD, according to Wilson: “The criminal activity at the property would have to be chronic and well-documented by LAPD before a DCA would even consider filling nuisance abatement action.”

And it turns out that for the City, filing a case essentially amounts to winning it. I recently obtained almost a hundred of these nuisance petitions, filed since 2015, from the CA via the California Public Records Act.5 and for the most part the targets don’t fight back. I checked all 67 of the cases opened between 2017 and 2019 and no more than ten involved any significant defense before settling essentially on the City’s terms.6 This means that the allegations in the petitions almost never get tested adversarially.

There’s no cross-examination, no documentation, and, surprisingly, not even testimony under penalty of perjury. In California Civil Procedure7 a petition is called verified when the complainant asserts belief in the truth of the allegations under penalty of perjury. For whatever reason nuisance abatement petitions are unverified, so no one even gets in trouble if parts of the cases turn out to be made up.8

And the DCAs who write the complaints take full advantage of the freedom the lack of verification allows them. Their work is filled with bombastic, lurid language, full of coded racism, characterizations and assertions that don’t look like they could withstand any critical attention at all, let alone the actual tests of veracity a trial could impose.9

The cases that actually get filed are only a small part of CNAP’s work. They also send out demand letters and in many cases extract concessions from property owners without ever filing a petition.10 According to Wilson the City Attorney opened 479 nuisance case files in 2018 and 2019,11 but they only filed 30 actual lawsuits.12 Also according to Wilson, ” the standards for opening a file are much lower than the standards to file a lawsuit against the property owner in court.”

These demands and the lawsuits which sometimes follow them are initiated by testimony from the same LAPD officers who are famous for pulling over black and brown drivers for no reason, searching people of color in incredibly large numbers, lying about their gang affiliations, targeting them based on often erroneous “chronic offender status,” and so on. Not only that, but a lot of the evidence of criminal activity is suspiciously vague.

For instance a typical claim will have the gang officer, or someone, because the source of the information is not given, saying that an undercover informant bought drugs at the property seven times in the last three years with no further detail. This is exactly the kind of stuff police are famous for lying about under oath. What’s the chance then that a lot of them aren’t lying about it as part of the nuisance abatement process, not under oath, no details required of them? Or if not lying, then unfairly targeting people selectively for personal reasons, or any number of easily imagined abuses.

Given the complete lack of checks on the nuisance abatement process it’s hard to imagine that it’s not being regularly abused, not just because it’s abuse to use municipal law enforcement to support gentrification, but abused on a much more personal level. And even if the officers aren’t lying, not working out personal grudges or seeking revenge, even if every fact supporting these nuisance complaints is true, the fact that the details aren’t public, that there’s no sworn testimony, that the complaints aren’t tested and discussed openly, undermines public confidence in the process.

The fact that, according to Wilson, opening a nuisance abatement file requires “chronic and well-documented” evidence of criminal activity at a property might appear to act as a check on abuse, but I don’t think that’s right. The LAPD is able to create superficially impressive records of criminal activity associated with addresses basically at will through selective scrutiny and mischaracterization. I have personally seen this happen at a hearing to revoke the conditional use permit of a bar in Hollywood, under attack by LAPD and the local business improvement district as part of their ongoing social cleansing program.

So here’s what we know or suspect about the life cycle of a nuisance abatement case:

★ A file is opened and presumably the DCA demands concessions from the property owner.

★ The property owner agrees to evict tenants, or sell their property, or install police-accessible surveillance cameras, or other such measures as demanded by the City.13

★ It this isn’t satisfactory the DCA files a petition on the basis of facts supplied by LAPD gang officers. The petition is unverified, so no one swears to the truth of its contents.

★ The respondents almost always settle the case on the City’s terms without litigating. This means that the City almost never has to put evidence before the court.

★ In particular the referring officers almost never have to testify under oath about facts supporting their referral. As far as I can see these facts are for the most part never made public at all.

★ The facts are often vague and of exactly the type that need to be tested by an adversarial process to be believable.

In other words, the nuisance abatement program for the most part allows the City of Los Angeles to force property owners to sell, to evict tenants, to become LAPD informants, ultimately based on little more than the sole untested word of an LAPD gang officer. A lot, therefore, is riding on the veracity of these police. But LAPD gang officers are not necessarily honest. Just recently 20 of them are accused of lying about people’s membership in gangs, and this is just the beginning of that investigation. It’s likely many more officers will be implicated.

And this scandal is already forcing the review of criminal convictions that relied on the testimony of these officers. Compare, e.g., the Rampart Scandal, which led to over a hundred convictions being overturned. I have never heard of civil matters being reviewed in the wake of revelations of police lies, but these nuisance cases make it seem essential. They have very real, often devastating, consequences for the targets but they’re based on mostly untested, unchallenged, secret information provided by police officers from units whose honesty is questionable, whose testimony in criminal cases is already being reviewed.

Image of Chief Assistant City Attorney Arturo Martinez is ©2020 MichaelKohlhaas.Org and something something et cetera.

Defendant, in her capacity as the owner, rents out every available space in the dilapidated and chaotic 1233 square foot house on the Property, including the common areas such as what were originally the kitchen and living room, as well as an open shack in the rear yard which features a presumably unauthorized outdoor toilet. Approximately a dozen people were living in this fashion in the refuse-strewn Property as of early November 2018.

This toxic and volatile situation is made all the more critical by the fact that an infant and a four year-old child, as well as an infirm elderly person, were living in various rooms at the Property as recently as early November 2018. Moreover, as noted, the Property is next door to a church that has services and other programs most days of the week.