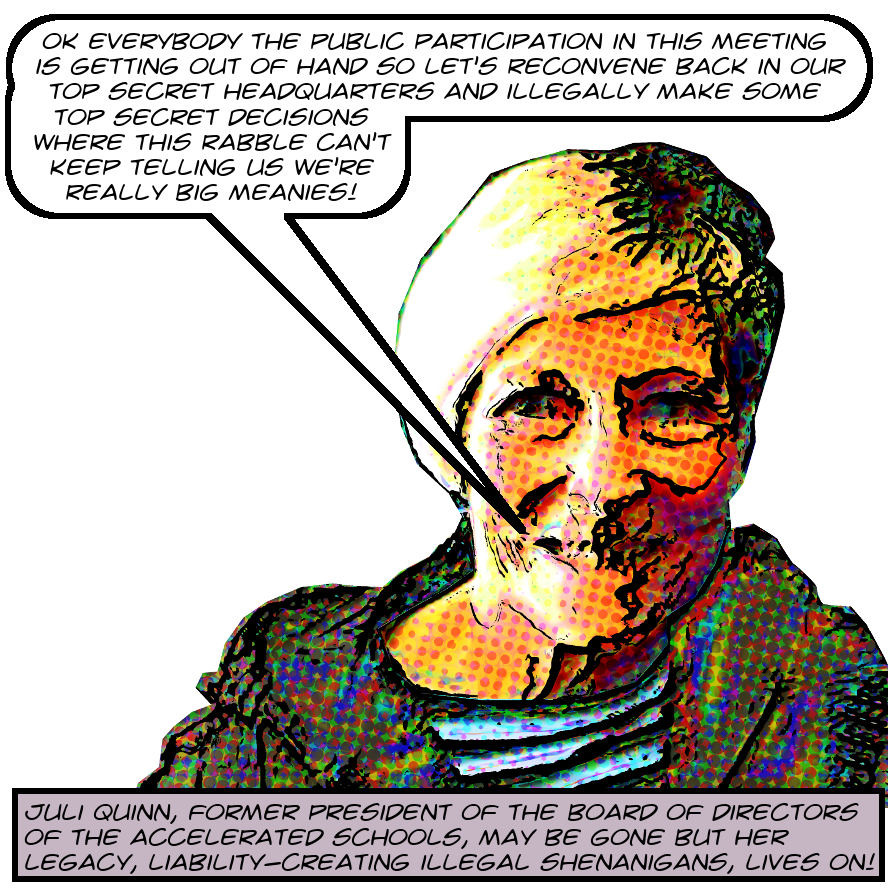 Of course you remember The Accelerated Schools! That white savior charter conspiracy out in the 90037? And how a couple days ago we served them with a lawsuit seeking to compel their compliance with the California Public Records Act? And yesterday I sent them a letter demanding that they unconditionally commit to never any more requiring members of the public sign in to their damn meetings, that practice being totally and utterly illegal under the Brown Act?

And maybe you recall also how that whole sign-in thing was not the only Brown Act violating practice that these privatizers habitually indulge in? In fact, on October 24, 2019 they violated the law by holding two distinct secret meetings, neither of which was agendized and for neither of which they allowed public comment. So since evidently this is what we’re doing around here this week, today I sent them yet another demand letter regarding these grave violations of the law.

As with yesterday’s letter, today’s includes a demand that they unconditionally cease, desist, never do no more again, and so on, these violations. But also there’s a demand that they rescind these illegal decisions, reconvene the meetings, and do them over again legally. This would require them to announce whatever it is they’re going to consider, allow public comment, and then vote in public. This is an aspect of the Brown Act that I have not used before, so it will be interesting to see what happens! And, as always, read on for a transcription of the letter.

1. Charter schools in California are private entities made subject to the Brown Act by state law and, for those authorised by the Los Angeles Unified School District, by the terms of their charter.

3. On two separate occasions during this meeting Board president Juli Quinn announced a “recess.”

4. During these “recesses” the Board went all together into the back along with some staff members and at least two members of the public who were attending the meeting.

5. On the Board’s return to the public area Quinn uttered statements which made it very clear that the Board had discussed business during these “recesses.” In one case Quinn announced a decision that the Board had made, which was to reopen the ordinary public comment portion of the meeting.

6. Neither “recess” was announced on the published agenda for the meeting.

7. Neither “recess” allowed for public comment on the matters discussed during the recess.

8. The Brown Act at §54952.2(a) defines a “meeting” to be any congregation of a majority of the members of a legislative body at the same time and location, including teleconference location as permitted by Section 54953, to hear, discuss, deliberate, or take action on any item that is within the subject matter jurisdiction of the legislative body.

12. The Board, being subject to the Brown Act, is a legislative body of a local agency.

13. The two occasions on October 24, 2019 on which the Board removed itself from the public view in order to discuss items “within the subject matter jurisdiction” of the Board were meetings as defined.

14. These meetings were neither open nor public, nor were they of the sort “as otherwise provided” by the Brown Act.

15. The Board violated the Brown Act by holding these two meetings out of the presence of the public.

16. The Board violated the Brown Act by discussing and/or taking action on matters not listed in the agenda for the meeting.

17. The Board violated the Brown Act by not allowing public comment on the matters discussed in these two illegal meetings.

18. These violations are not just incidental, technical, nor harmless. Rather, they implicate fundamental constitutional rights that the people of California have reserved to themselves. The Brown Act at §54950 states:

20. By discussing matters which did not appear on the posted agenda for the meeting the Board deprived members of the public of their right to make an informed decision as to whether to attend the meeting and address the Board concerning the matters on which they acted.

21. By failing to provide an opportunity for members of the public to address the Board before holding private meetings the Board deprived the public of their fundamental right to instruct their public servants on the actions they ought to take with respect to matters of public concern.

22. TAS’s failure to comply with the requirements of the Brown Act constitute a grave betrayal of both fundamental and consequential principles of our government. It is therefore in the best interest of all concerned that the school not only cease and desist from such violations in the future but that they make a public commitment to ceasing and desisting.

23. Because TAS’s failure to comply with the requirements of the Brown Act deprived members of the public the opportunity to know in advance what was to be discussed by the Board as well as the opportunity to comment publicly before action was taken and of the opportunity to observe and understand the deliberations of the Board, it is in the best interest of all concerned that the Board cure and correct this grave error.

25. If TAS responds to this demand within 30 days of today’s date by curing and correcting these violations and, additionally, with a letter expressing an unconditional commitment to cease and desist from all future violations of this type in substantially the form given by the Brown Act at §54960.2(c) I will consider this matter at an end. Please send this letter to me by email at ■■■■■■■■■@■■■■■■■■■.org and by postal mail at:

26. If TAS refuses to so respond or so responds after 30 days have passed I will instruct my attorneys to proceed to “commence an action by mandamus or injunction for the purpose of obtaining a judicial determination that [the above-described actions taken are] null and void” under §54960.1 of the Brown Act and, additionally, to “file an action to determine the applicability of this chapter to [the above-described] past actions of” The Accelerated Schools under §54960.2 of the Brown Act. If I prevail in that action the Brown Act at §54960.5 allows for the court to award costs and reasonable attorneys’ fees to me.

Image of former TAS board boss Juli Quinn is ©2019 MichaelKohlhaas.Org and you could do worse in life than to click on this lil JQ over here.