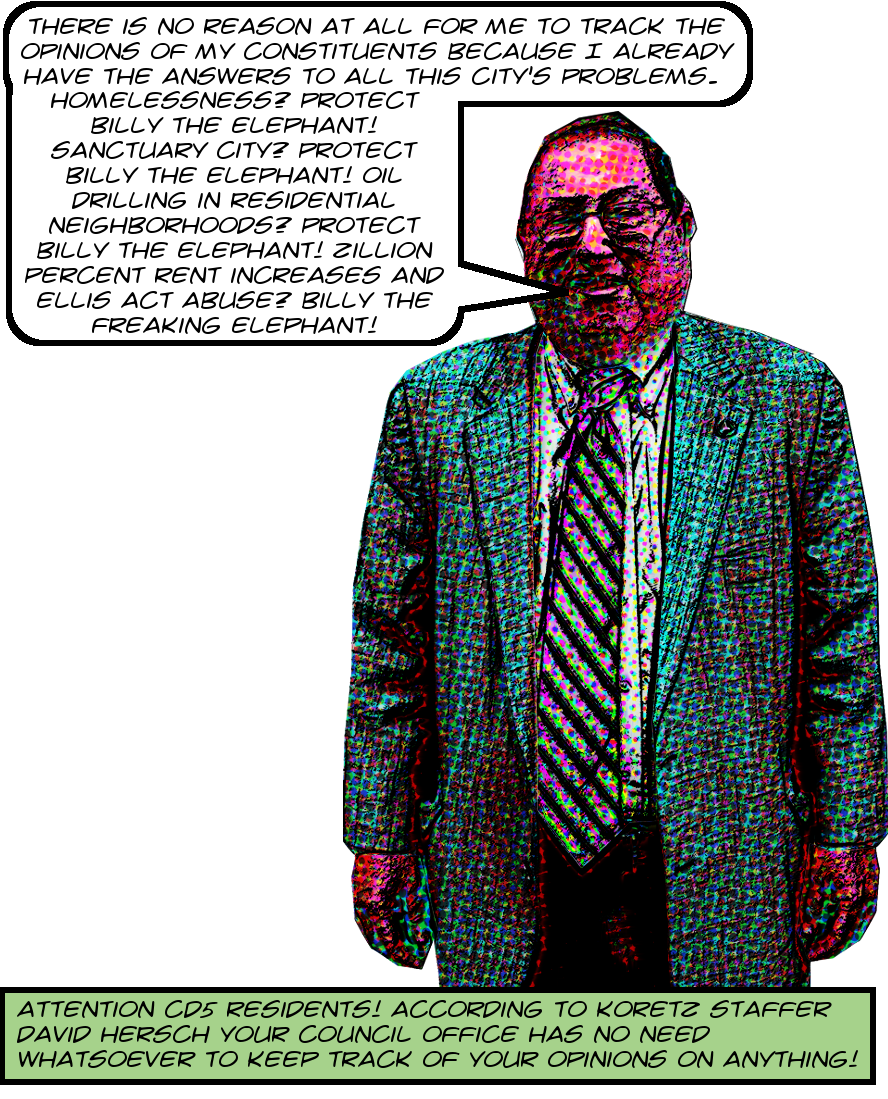 I can’t write yet about the City Council’s appalling behavior on Tuesday with respect to outlawing vehicle dwelling by renewing LAMC 85.02. It’s still too raw, and it’s too soon to have related records to publish. Local hero Lexis-Olivier Ray has an essential story on it in L.A. Taco, a story he inadvertently became a participant in when the police illegally forced him, a working journalist, to leave the room.

The day before the vote a lot of folks were calling their Councilmembers, leaving messages, sending emails, and so on, urging their repsters to vote against this abhorrent nonsense, much of it coordinated via Twitter. And to encourage action, @MamaWetzel told us that these calls do matter because there are staffers whose jobs it is to track public opinion on issues via spreadsheets and so on.1 And at that word, spreadsheets, well, my eyes just rolled back in my head with joy because, as you know, a spreadsheet is a public record!

So I immediately asked a few representative council offices for 2019 records used to track constituent opinion on issues, giving spreadsheets as an example but not limiting it just to spreadsheets.2 This, as I said, was on Monday, just a few days ago. In CPRAlandia that’s nothing, no time at all, an eyeblink. So I wasn’t, and still am not, expecting results soon. But despite that, yesterday, July 31, 2019, I did actually get some very interesting news from CD5, who is pretty easy to make requests of, being on NextRequest.

Their designated CPRA responder, David Hersch, initially told me that my request was “overboard, [sic] unduly burdensome and unfocused” because, he claimed, there were too many records responsive and that therefore he wouldn’t process it until I narrowed it down. This is a standard move in the City of Los Angeles and I discuss it in great detail below. I responded, as I typically do, by asking how many records there were and explaining that the request was exceedingly focused.

Hersch responded five hours later by saying that actually there were no records at all and that CD5 didn’t keep track of constituent opinions, or at least had not done so in 2019.3 This is pretty interesting news even apart from the interesting but technical matters regarding CPRA. It’s not like Koretz doesn’t do stuff on the Council. He’s famous for his animal rights work, the importance of which I am not discounting.

For instance, just recently he’s been spending a lot of time saving Billy the Elephant, and there was that vegan food thing from December. This year alone he’s sponsored 80 motions. But all those calls and letters you folks in CD5 have spent the time to send? All that public comment? No one over there is keeping track at all. Paul Koretz has his mind made up, he’s gonna do what he’s gonna do, and ain’t all your tears wash out a word of it.4

And at this point I won’t be surprised if none of them keep track. I will certainly be working on finding out, of course. Which would be an important part of an explanation as to why Los Quince Jefes can sit up on their dais so complacently day after clueless day fiddling with their phones while their computers automatically vote yes on oppression and the City prepares to burn. That’s today’s revelation and today’s rant. Read on for the CPRA wonkery!

all 2019 records recording or tabulating constituent opinions on issues to be voted on like spreadsheeting of phone calls, emails, speaker comments, and like that pls.

The next day, July 30, 2019, at 4:39 p.m., David Hersch responded with a note telling me that he was going to respond. I’m not sure why he did this as it’s not required by law and was fairly content-free. It’s possible, even likely, that he was just being kind and that I’m too jaded by the City’s pointlessly obstructionist shenanigans to understand what’s being offered:

This message is in response to your July 29, 2019 CPRA request (Request #19-4247) to Council District 5 seeking “all 2019 records recording or tabulating constituent opinions on issues to be voted on like spreadsheeting of phone calls, emails, speaker comments” and the like, pursuant to the California Public Records Act (CPRA).

Please be advised that we are working diligently to conduct a thorough search of our files for documents responsive to the your Request. We expect to make a determination concerning the request on or before August 8, 2019.

If you have any questions, you may follow up with me by e-mail or at 213-473-7005. We great appreciate your courtesy and cooperation in this matter.

Unfortunately, your request cannot be processed at this time because it is overboard, unduly burdensome and unfocused. Please narrow your request to a specific subject matter (i.e. homelessness, transportation, etc.). It would also be helpful if you provide search terms defining the subject matter you are seeking.

Once you’ve done this, you are welcome to resubmit your request for processing.

This is a common move among CPRA responders, to claim that the request is overbroad5 and that therefore to gather records in response would be unduly burdensome. They’re relying on some court cases that held that it’s not in the public interest for agencies to spend hundreds of hours responding to CPRA requests rather than doing whatever work they were established to do.

That’s probably reasonable as a principle, but the City of Los Angeles abuses this to an amazing degree. For instance, it’s clear here that Hersch didn’t actually look for any responsive records, so that his claim that there are too many is just made up. Also it’s clear that he didn’t even read the request, or if he did he didn’t understand it.

These statements: “Please narrow your request to a specific subject matter (i.e. homelessness, transportation, etc.). It would also be helpful if you provide search terms defining the subject matter you are seeking” are used by officials all over the City of LA use when denying requests for emails. They’re nonsense,6 it’s not required to identify records by subject matter or to give search terms. It’s only required to reasonably identify records. Search terms are one way to do this, but they’re far from the only way.

Which, by the way, is where his claim that the request is unfocused fits in. Responders commonly use this term to mean that a request has too many records responsive to it, as a synonym for overbroad and its antonym, focused, as a synonym for narrow. But that is not at all what it means in the context of the Public Records Act. There a request is focused if it reasonably identifies the requested records.

Mr. Hersch, my request is not unfocused. It seeks identifiable records, therefore it is focused.

Second, I did provide a subject matter. The subject matter is “means by which CD5 keeps track of constituent opinion on pending issues.”

Third, it’s impossible for me to narrow my request without knowing what kinds of records there are. Thus in furtherance of your statutory duty to assist me in framing my request in such a way that CD5 will stop making fairly indefensible claims about over-burdensomeness, why don’t you tell me all kinds of records that CD5 generates in order to keep track of constituent opinion. I am told by a plausible but ultimately unreliable source that spreadsheets are involved. Perhaps there are other types of files?

Also, in support of your claim that there are too many records for CD5 to fulfill my request as stated, can you please tell me how many there are?

It took Hersch about four hours to get back to me on that, which is when his big revelation about CD5 not tracking constituent opinions was made:

Our office doesn’t typically maintain spreadsheets, emails or logs that track constituent opinions on issues. We have not had an issue that we have tracked and tabulated during the past seven month, so we have nothing responsive to provide. This request with the Office of Council District 5 is considered closed.

And this, friends, apart from CD5’s not caring about public comment, is maddening. In just five hours Hersch went from telling me that he was closing my request because I asked for too many records to closing my request because there were no records. The City of Los Angeles is so arrogant when it comes to complying with the CPRA that they don’t even feel like they have to take the time to make any freaking sense at all. It’s so upsetting. There’s not much recourse, sadly, but there is something. The CPRA does require responders to discuss with requesters ways to overcome practical obstacles to receiving records.7 Like they have to talk to you about how you might get some records. So I said all this to Hersch:

Mr. Hersch, don’t you find it a little disconcerting that first you said that my request was so broad that it would be burdensome to fill it and then after you took the time to understand it you said that there were no responsive records?

The law requires you to do a search before you claim that there’s too much stuff. Obviously you didn’t do that.

Now, please do your duty and assist me in reframing my request to overcome practical obstacles to obtaining records. I told you my purpose. You say there are no records from 2019. Are there any records at all? I feel like given your initial claim of extreme voluminosity there ought to be some. Please assist me in figuring out what to ask for to understand what I am trying to understand.

And as a gesture of good faith, why not reopen the request while we are having this statutorily mandated conversation?

In response to which Hersch essentially admitted that he hadn’t read my request before responding to it, bolstering the already-strong case for his initial response being copypasta:

I apologize for the first messages I sent. Unfortunately, I read your request wrong. When I realized you were only looking for records (spreadsheets of phone calls, emails, speaker comments, etc.) that recorded or tabulated constituent opinions, I had to revise my answer to your request, and let you know we have no documents that are responsive to your request.

And now I’m waiting for him to clarify whether he meant they didn’t do this during 2019 or that they never ever do it. Not holding my breath for a response.

Image of Paul Koretz is ©2019 MichaelKohlhaas.Org and your friendly UCLA elves…well, just see for yourselves!