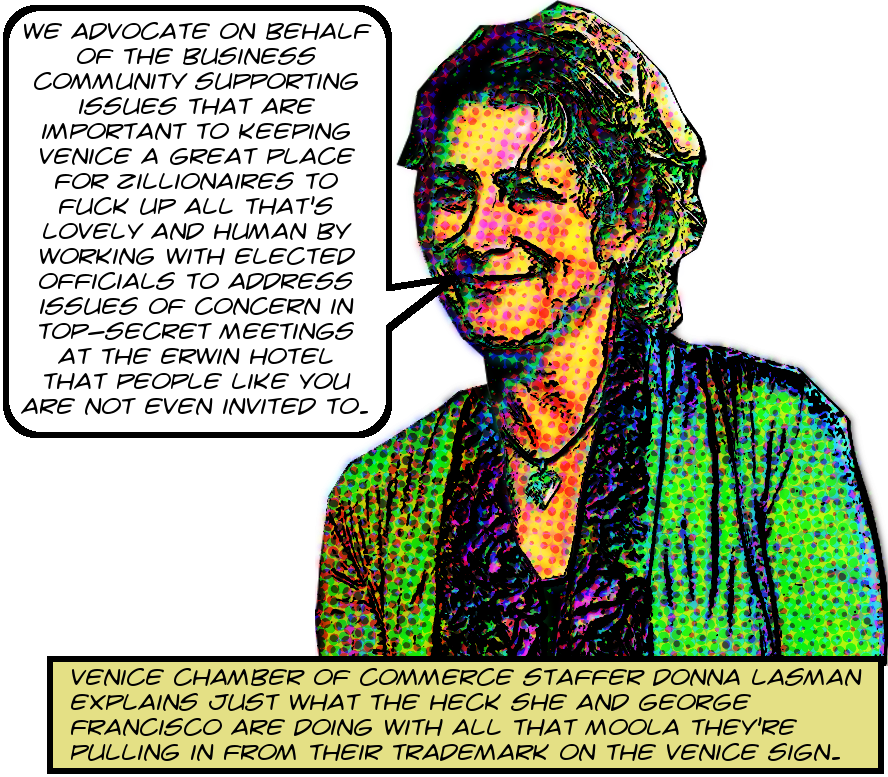 Maybe you remember that on March 1, 2019 representatives from the august office of the august Mayor of Los Angeles journeyed westward to Venice to hold a secret creepy little invite-only conclave with local zillionaires, sponsored by the Venice Chamber of Commerce and held at the locally celebrated white supremacist compound known to the world as the Hotel Erwin. Well, it actually happened, and I recently obtained a list of invitees and some emails about the process of planning the confab and wrote a fairly well-received post about the material.

But of course if there are any unifying themes at all to CPRA-based investigations they’d be the fact that (a) material trickles in very, very slowly and (b) it does not arrive in any particular order.1 Which is why it’s getting close to eight weeks after that first post and I have just recently obtained the presentation materials from that tip-top secret meeting, which is why I have taken up my metaphorical pen this morning and am metaphorically scribbling this note to you! There are three items on the menu this morning.2 These are:

And of course, look at them if you want to. Publishing public records is a big part of what we do here at the blog and there’s not much point in publishing if nobody reads. But I will tell you in advance that there’s absolutely nothing interesting in the content of these documents. They say nothing at all and they say it in an incredibly tedious manner.

Not only that, but they’re obviously reworkings of generic presentations that these City staffers and the people from the Los Angeles Tourism Board have given many times, only very lightly edited to reflect the interests of this particular audience. There’s nothing in these powerpoints that needed to be said at all, let alone to be said in person. But nevertheless, it would be an error to write this off as the usual booshwah spewed in such astonishing volume by real-estaties. In fact, the very lack of content is itself the medium that’s communicating the extremely important message.

Which is, of course, that despite everyone’s lip service to democracy, the government of the City of Los Angeles is a tool, a weapon, wielded by the propertied classes against everyone else to preserve and increase their wealth. These people don’t need to ask or tell one another about the steps the City is taking to increase tourism or computerize the process of getting a business license.

First of all no one cares and second of all zillionaires have staff to handle that kind of tedious crapola. What they really need to do when they get together, these officials and these zillionaires, the real purpose of these meetings, is to reaffirm their personal relationships and have off-the-record therapy sessions where the masters can bitch to their minions about whatever it is they’re fretting about at the moment.

These days that’s probably a few downtrodden homeless people living in tents where they can be seen from the gardens of the ultra-rich. The purpose is for the City officials to show their obeisance, to perform their submission. What the powerpoints say is never the point.

But it’s still necessary to have the powerpoints in all their vapid glory because otherwise what are they all going to write on their calendars? The truth isn’t acceptable and might end up subject to a CPRA request. So yeah, I’m sorry that these newly obtained records don’t have much to say, but I hope at least they have a lot to tell us!

Image of Venice Chamber of Commerce staffie Donna Lasman is ©2019 MichaelKohlhaas.Org and here’s a Donna Lasman for you! And if anyone still cares about stuff like this you can read the original quote here, although my version is, obviously, way more accurate even if she didn’t actually say it in so many words.