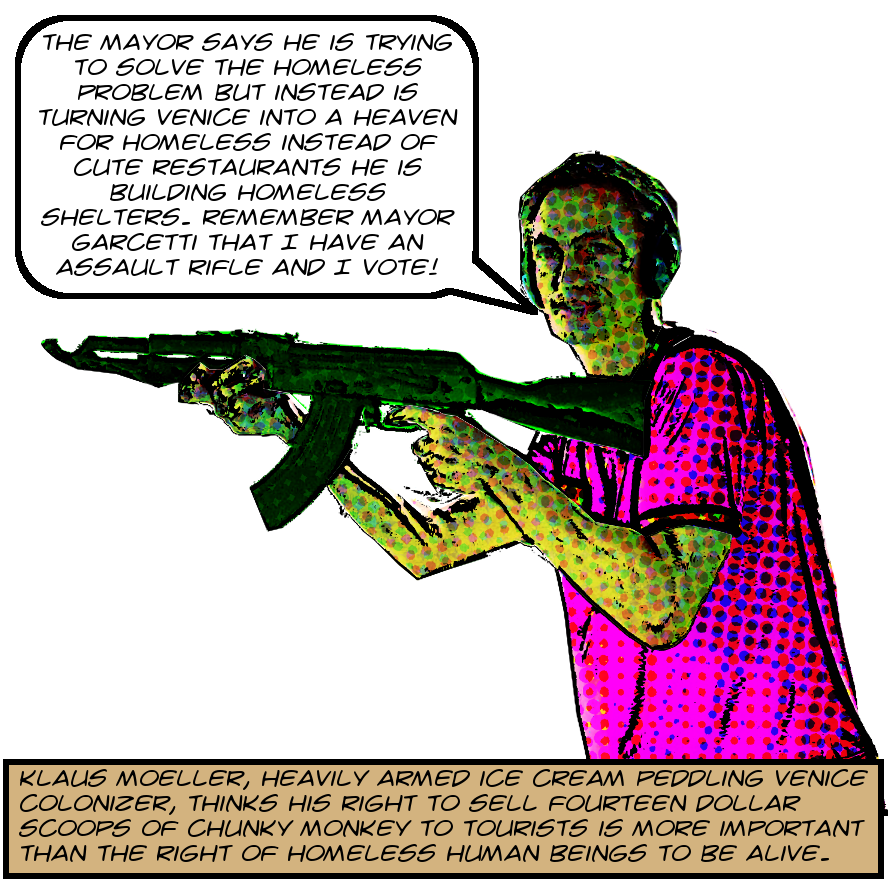 And there among the assorted delusional rants about how the entire government of the City of Los Angeles is conspiring against the poor beleaguered zillionaires of Venice to prevent them from opening even more cute restaurants so that there will be more space for homeless people1 was an actual important piece of information. According to El Moeller, his “daughter just came back from a small round table meeting with 20 people at the Erwin Hotel. The meeting was called for by the Mayor’s office and the Venice Chamber of Commerce.”

So this is news, right? The Mayor’s office is holding top secret invite-only meetings with Venice zillionaires in the white supremacist paradise known as the Hotel Erwin! And other people were interested in the story besides me! And someone fired off a CPRA request to David Harrison, who seems to be one of the Mayor’s lawyers.2 And wow! Just yesterday the Office of the Mayor sent over 8 pages of emails explaining what happened, and containing a really unexpected gift!

What it was was a “business summit” organized by the Venice Chamber of Commerce in the person of Chamber CEO Donna Lasman. And what was it meant to be about? Well, here’s what Lasman said to Garcetti staffers Robert Park and Ami Fields-Meyer about it:

I am pleased to inform you that we have secured a location for our business summit on Friday, 3/01. The event will be at Hotel Erwin – 1697 Pacific Avenue = and will be organized into 2 sessions. The first session will be located in Larry’s Loft from 9:00 am – 1030 am and will consist of your presentation.

We have sent invitations to approximately 50 business leaders in the community from diverse business sectors and representing the various areas in Venice – Abbot Kinney, Lincoln Blvd., Ocean Front Walk, Rose Avenue and Washington Square. We expect approximately 30 people to attend.

As we discussed during our meeting, we are interested in hearing an assessment on the current business climate and trends for the Westside community, issues and initiatives that the Mayor’s office is working on, and how business leaders in Venice can partner with the Mayor’s office to work on issues that support a thriving economy in Venice.

Carol/George – please chime if there is more that you want to add.3

The second session from 10:30 am to 12:00 pm will be a focus group/planning session with about 15 stakeholders. Our goal for this segment is to identify priorities for our business community and create actionable items for mobilizing our business community. Though there is no need for you to stay, you are of course welcome to join

And another interesting fact revealed in these emails is the list of speakers. Here they are:

But the real gem was this spreadsheet, which contains the RSVP list for the event, along with email addresses! The people listed here may not be the ones that ruined Venice in the first place, but they’re the ones who are keeping it ruined and ruining it even more! This is extraordinarily useful information! And there’s an auto-generated HTML version of the spreadsheet after the break. And also there’s the pretty interesting and enlightening full story of how I got the spreadsheet via the CPRA request, which you should definitely read if you’re interested in CPRA pragmatics! 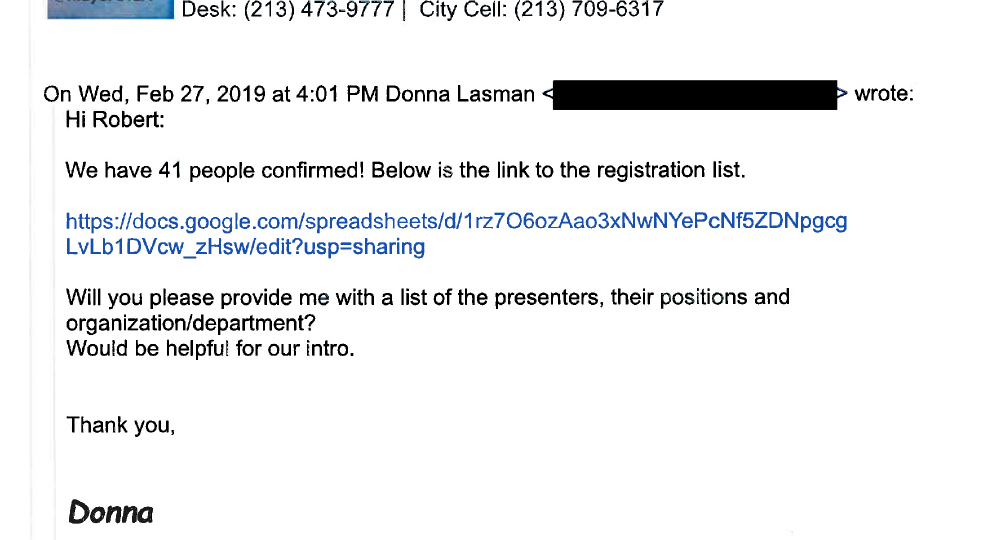 There, in this fairly tedious email conversation discussing the mind-numbing mechanics of arranging for zillionaires to get their egos rubbed and tugged by Mayoral aides, was the above pictured snippet from Lasman to Park crowing about how many people were going to attend. And there was a link! And dammit, I really wanted to click on that link and see what was there!

Now, the Mayor’s office provided these emails as PDFs, which is semi-decent of them, but only semi. Leaving aside the fact that the CPRA requires agencies to provide emails as MBOX files4 many hostile agencies will require requesters to come in to look at records, will refuse to allow requesters to take photos of the records, will charge outlandishly high amounts of money for copies, and so on. So it’s semi-decent of the Mayor to provide these 8 pages already scanned and without charge.

But they aren’t the good kind of PDFs. They’re image-based, which means that the characters aren’t recognizable to a computer without special software. And the link is not the good kind of link, where it has comprehensible words in it mostly. However, it’s possible to type the damn link into the browser manually, watching carefully not to miss a random letter!

And what do you know?! It actually worked!! Here it is, all typed in for you to try, although goodness knows it may not last long now that the secret is out:

So the moral of this subplot is that you should always try all the links in any records you get. There’s sometimes amazing stuff linked to, and as interesting and valuable as this item is, it’s not even close to the most interesting and valuable stuff I’ve discovered this way. Scroll down for a fairly clunky autogenerated version of the spreadsheet! On which, by the way, you can find Klaus Moeller! And a note by Donna Lasman that says “Tia attending,” Tia being the daughter that Moeller referred to in the Nextdoor screed that launched this whole investigation!

And that’s what we know so far about this top secret Venice conclave of zillionaires and City staff. Not much, but more than we had before. And potentially less than we’ll have later, so stay tuned!

Image of Klaus Moeller exercising his rights under the Constitution to be a freaking moron is ©2019 MichaelKohlhaas.Org and if you want any more you can sing it yourself.

One thought on “Some Eric Garcetti Staffers And The Venice Chamber Of Commerce Held A Private Meeting At The Hotel Erwin On March 1, 2019 — Which We Learned About From A Characteristically Whiny Privileged And Entitled Nextdoor Post By Gun-Toting Homeless Hating Ben And Jerry’s Franchise Owning Angry White Dude Klaus Moeller — We Now Have The List Of Attendees! — With Email Addresses! — And The List Of Speakers!”