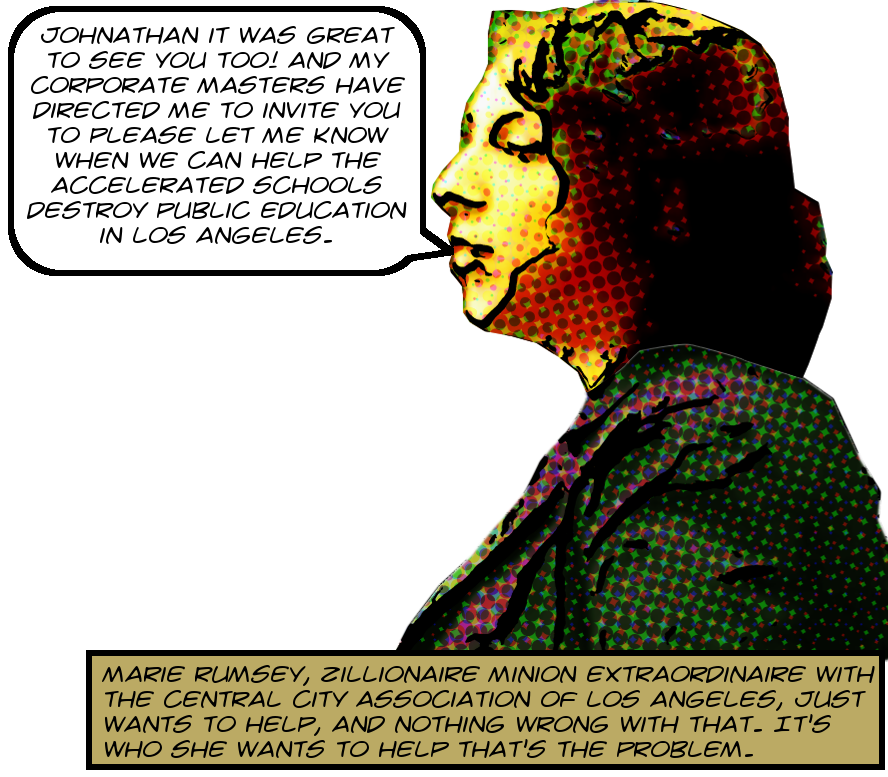 But don’t be turned off by the triviality of the subject. The real story here is the existence of the network that allows such transactions as these to be negotiated seamlessly, effortlessly, genially, without friction. The shared presupposition of the value of charter schools revealed by the fact that no one questions it. That’s ultimately what we’re learning about, and such knowledge, like all knowledge worth having, comes a speck at a time. Until a vast panorama is revealed, like pointillism. Turn the page for transcriptions and links to the emails!

The backstory starts in 2016, when, it seems, Johnathan Williams encountered CCALA lobbyist and confessed criminal Marie Rumsey at zillionaire-favorite sushi upseller Katsuya.2 And every accomplished bootlicker knows what to do in such cases. Since you, my readers, are not bootlickers,3 I will fill you in! Send a damn follow-up email! And here’s what Williams wrote to Rumsey:

So good to see you last week, and please keep us in mind when opportunities to be involved for kids or me arise.

And it’s for just this kind of nonsense that Marie Rumsey gets paid her zillion dollars in the sweat of her brow. Here’s her answer, and one can just smell the grease being slathered on the wheels of whatever vehicle is being maintained.

Hi Johnathan. It was great to see you too!

And. I will definitely keep you in mind. Also, please let me know when we can help TAS.
Have a great weekend.

And a mere nine months later, well, Marie Rumsey did have occasion to help Johnathan Williams. The story opens with this email from Carl Cade, exceedingly creepy looking member of the Board of Directors of Carol Schatz’s nightmare horror show wet dream, the Central City Association, to Johnathan Williams, on which Marie Rumsey was CCed. It seems that one of Williams’s charter schools, the Wallis Annenberg High School, needed a place to hold a retreat:

Last week after we talked I reached out to Marie Rumsey at Central City Association (whom you probably know from when she was Planning Director in Jan Perry’s Council Office) and she had some great ideas.

1. Ratkovich Company – The Bloc (formerly Macy’s Plaza) – contact Kathleen Miller -I talked to Kathleen and she thought they might have some white boxed future office or retail space you could use. Kmiller@ratkovich.com

Marie is happy to make an introduction to the remaining three.

So Carl Cade, a corrupt Downtown LA Developer and member at one time of yet another bullshit Garcetti-driven commission, is helping Williams find a venue for a thirty person two day retreat. And unlike normal people in normal workplaces, who would normally go to like a hotel or something, Carl Cade circled in4 Marie Freaking Rumsey, who spieled off a list of Downtown zillionaire power elites. This might ordinarily be interpreted as a look whose metaphorical rolodex radiates more metaphorically phallic power move, but I don’t think that’s what’s going on here.

• Wayne Ratkovich — Lead bossman of the Ratkovich Company, a developer of super-large-scale projects of the sort creamed over by dumbass urbanists in every corner of the City and disdained by human beings.

• Tom Gilmore — It’s hard to know where to start with this guy, who has done more to destroy the living soul of Downtown Los Angeles in any number of ways than any known human other maybe than Carol Schatz, who was Marie Rumsey’s boss at the time these emails were sent, but is despite his soul-destroying ways nevertheless the subject of uncritical adoration from the usual crew.

• Adele Yellin — Former owner of Grand Central Market, which she’s responsible for destroying. She is or was really involved with the Historic Core BID and the Downtown Center BID. Not a supervillain but definitely a villain.

• Steve Needleman — This guy owns many buildings on Broadway and is a big player in the Fashion District BID, run-of-the-mill zillionaire.

These are the kind of people whose economic interests, and when one has that much money economic interests are the only interests left, can only be served by destroying the human interests of normal people. Which is why this episode, of Marie Rumsey and Carl Cade tapping them to help the charter school people find space for their retreat, reveals something important. The zillionaires want something from the charterites, and what they want is not good for the rest of us.

But back to the emails! Johnathan Williams is all over this! And strikes just the right tone of cheerful sycophancy! And see how he takes care to mention that he already knows at least one of the zillionaires, because to he who has it shall be given! So it’s crucial to make sure that people in a position to give know you’re one who has!

Thanks Carl and Marie!

What a small world! I’m copying my HS principal, Rene Quon for his consideration.

So funny that in addition to knowing Marie, I’ve had the chance to hang out with Ratcovich, as he’s also working with my Board chair, Eric Johnson on the Ports o’Call Village re-do in San Pedro.

Look forward to connecting with you both soon.

But the cheerful sycophancy of Johnathan Williams is nothing at all when placed next to the quantum leapingly manic sycophancy of Annenberg High School principal Rene Quon in his response:

Thank you so much for your suggestions! These are extremely helpful, and I look forward to empowering and inspiring our teaching staff to serve our students with passion and dedication in the upcoming school year.

Last week I reached out to the first contact (Kathleen Miller) by email, but unfortunately haven’t heard back. Could you please arrange an introduction with the last three, or forward their contact information? That would be greatly appreciated.

Thank you sincerely for your time and support,

It’s beyond cute, isn’t it?! How Rene Quon actually thinks that any of these people actually care about statements like “I look forward to empowering and inspiring our teaching staff to serve our students with passion and dedication in the upcoming school year.” As if zillionaires are paying zillions to have anyone but themselves empowered. Not likely.

There’s no dramatic ending here. Later that day, the deal not being closed quick enough for the refined taste of Carl Cade, he sent a hurry-up email to Marie Rumsey and she responded mere minutes later with details of what she’d worked out. Presumably Rene Quon went on to inspire with passion and dedication, and everyone lived happily ever after. And in honor of there having been no dramatic ending to the story, I’ll have no dramatic ending to this post, which is essentially just a slice of life in Zillionairelandia. Pointillism.

Image of Marie Rumsey is ©2019 MichaelKohlhaas.org.