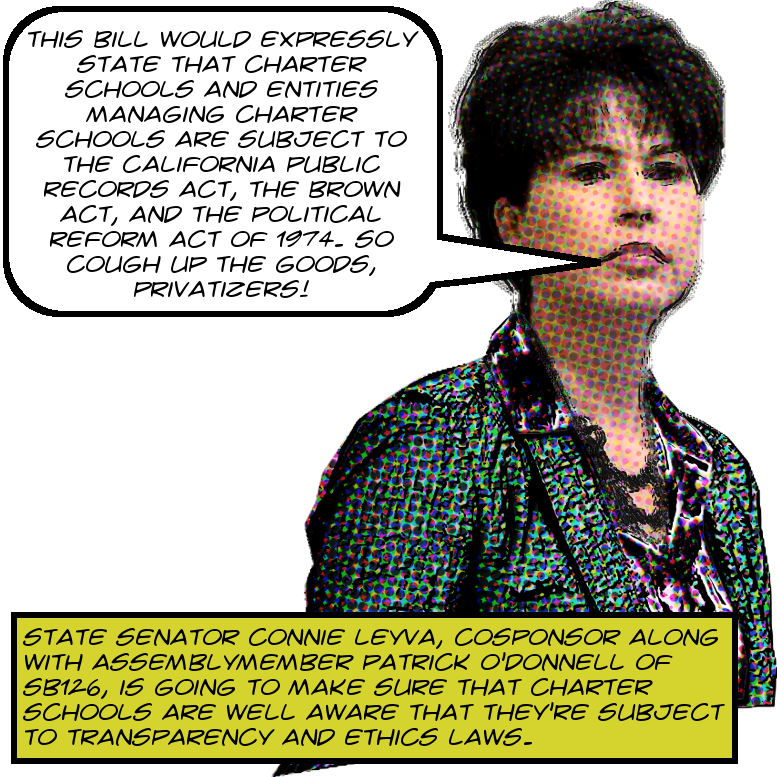 You may recall that California State Attorney General Xavier Becerra issued an opinion in December 2018 stating that charter schools in California were subject to the Brown Act and the Public Records Act. And recently, despite some ill-founded pushback, I was able to use the CPRA to get some pretty interesting information out of a local charter school, New Los Angeles.

But AG opinions aren’t law, and evidently there is still some uncertainty about the matter, for instance see this article by Tony Butka in CityWatch LA. So yesterday, state legislators Connie Leyva and Patrick O’Donnell introduced SB126, which states explicitly that charter schools and the organizations which run them are in fact subject to the Brown Act, to the Public Records Act, to the Political Reform Act of 1974, and to certain ethics laws.1

If this passes into law, and why should it not, it will be an incredibly useful tool for activists, the fruits of which you’ll be reading about here and elsewhere for the foreseeable future. Turn the page for the legislative analyst’s description of what the bill would do.

(2) The California Public Records Act requires state and local agencies to make their records available for public inspection and to make copies available upon request and payment of a fee unless the records are exempt from disclosure.

(3) Existing law prohibits certain public officials, including, but not limited to, state, county, or district officers or employees, from being financially interested in any contract made by them in their official capacity or by any body or board of which they are members, except as provided.

(4) The Political Reform Act of 1974 requires every state agency and local governmental agency to adopt a conflict-of-interest code, formulated at the most decentralized level possible, that requires designated employees of the agency to file statements of economic interest disclosing any investments, business positions, interests in real property, or sources of income that may foreseeably be affected materially by any governmental decision made or participated in by the designated employee by virtue of that employee’s position.