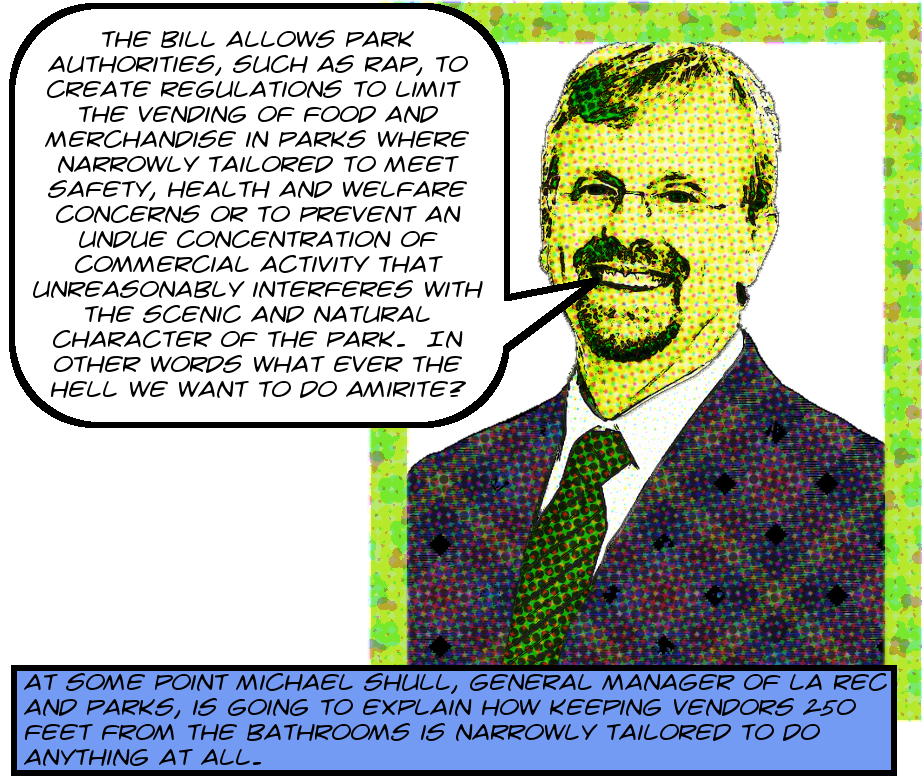 In September Jerry Brown effectively ended almost a decade’s worth of lunatic zillionaire opposition to street vending in Los Angeles when he signed into law Ricardo Lara’s monumental SB-946, which puts really strict limits on what municipalities can do to regulate vendors. In particular the law explicitly forbids cities to ban street vending anywhere other than for reasons “[d]irectly related to objective health, safety, or welfare concerns.”

And briefly it appeared that the City Council was going to try seriously to meet the challenge of developing compliant regulations But then things, as they often will do over at 200 N. Spring Street, rapidly devolved into fractious fractionated factionalism, with each Councilmember rushing about adding ad hoc restrictions, limitations, and so on at the mere behest of any zillionaire with $700 to kick into the old officeholder account. And yesterday this trend went on, worsened, and weirded up with the opening of supplementary Council File CF 13-1493-S6, which has to do with regulating vending in City parks.

The new law allows cities to regulate street vending in parks to some extent, and this council file is a response to that permission. It’s very sparse right now, having only started yesterday, and contains only a set of regulations proposed by Rec and Parks, a recommendation that the Council adopt them, and some kind of cover sheet. Now, Lara’s bill does allow cities to regulate vending in parks slightly more broadly than in general. In particular it allows regulation to protect “the scenic and natural character of the park” and some similar considerations. However, regulations must still be narrowly tailored to address these concerns.

But the restrictions in RAP’s proposal are anything but narrowly tailored, and there’s no plausible way they address the kinds of concerns that the law allows. For instance they contain a blanket ban on vending “within 250 feet of any building, recreation center, bathroom, structure or playground” and “within 500 feet of any school site, camp, youth activity center or senior center located on park property” and within “25 feet of any park fountain, statue, monument, or art installation.” Think of the parks you’re familiar with in Los Angeles. How many of them have any part that’s more than 250 feet from a building or a bathroom or a playground? If adopted, these regulations will constitute a de facto ban on vending in parks, which obviously isn’t consistent with the law.

It’s going to be interesting in some kind of abstract lookie-loo way to watch the City try to explain how a blanket prohibition from selling sliced mango within 250 feet of a bathroom is “[d]irectly related to objective health, safety, or welfare concerns,” how selling a taco within 500 feet of a senior center is “[d]irectly related to objective health, safety, or welfare concerns,” and so on. It’s also going to be interesting to watch the lawsuits that are sure to be filed if the City adopts this nonsense and ever tries to enforce it. It would be more interesting, of course, to watch the City government behaving like mature lawmakers. That, though, is never going to happen, so we have to take our enjoyment where we can.

And turn the page for a transcription of the so-called time, place, and manner regulations being proposed by RAP. I only quoted the worst ones above, but the rest of them are also not good, and therefore worth reading.

As I said above, the following proposed regulations are quoted from this proposal submitted to Council on November 9, 2018 by Rec and Parks:

1. As used in these Rules and Regulations, “Vend,” “Vending” and “Vendor” shall have the same meaning as defined in Los Angeles Municipal Code Section 42.13.A.1

2. Vending is restricted to non-motorized conveyances, stands, or pushcarts, which must be not more than 8 feet in length and not more than 3 feet in depth, including wheels, axles and other appurtenances to such wheels.

3. Vendors shall not leave their vending conveyances, stands, or pushcarts unattended.

4. Vending shall only be allowed at parks during their normal operating hours.

5. Vending shall cease 30 minutes before the park’s closing time to allow for cleanup and to ensure timely clearance of the vendor and patrons from park property. Vendors shall remove all vending equipment each day before the park closes.

6. Vending shall be restricted to paved pathways or designated paved walking areas only. Vendors shall ensure that such pathways are not blocked, allowing for pedestrian and wheelchair/ADA clearance.

7. Vending is not allowed on grass, trails, or dirt paths within a park or in parking lots or streets owned and operated by RAP.

8. Vendors are prohibited from using any parking stall or designated parking area for vending conveyances, stands, or pushcarts to sell food or merchandise.

9. Vending is not allowed in RAP maintenance or storage yards.

10. Stationary Vendors are prohibited from selling food or merchandise in parks or facilities that have exclusive, signed concession agreements. (See Attachment A)

11. Vending is prohibited within 250 feet of any building, recreation center, bathroom, structure or playground.

12. Vendors are prohibited from vending within 500 feet of any school site, camp, youth activity center or senior center located on park property.

13. Notwithstanding the above rule, vending is prohibited within 2500 feet of the Greek Theatre on event nights, or within 2500 feet of the Griffith Observatory or the Griffith Observatory’s upper parking lot at all times due to limited egress and ingress to those venues, the abundance of heavy visitor traffic and because both sites maintain exclusive food and merchandise concessionaires. (See Attachment B).

15. Vending is prohibited within 5 feet of park benches or other park furniture and from within 10 feet of any crosswalk or ADA access ramp.

16. Vending is prohibited within 25 feet of any park fountain, statue, monument, or art installation.

17. Vending is prohibited in any park deeded, granted or otherwise gifted to the City with a restriction prohibiting commercial activity in the specified park. (Currently the only park with such a restriction is: Leimert Park).

20. Vendors are prohibited from playing or operating any device to produce music or amplified sound for advertising or commercial purposes.