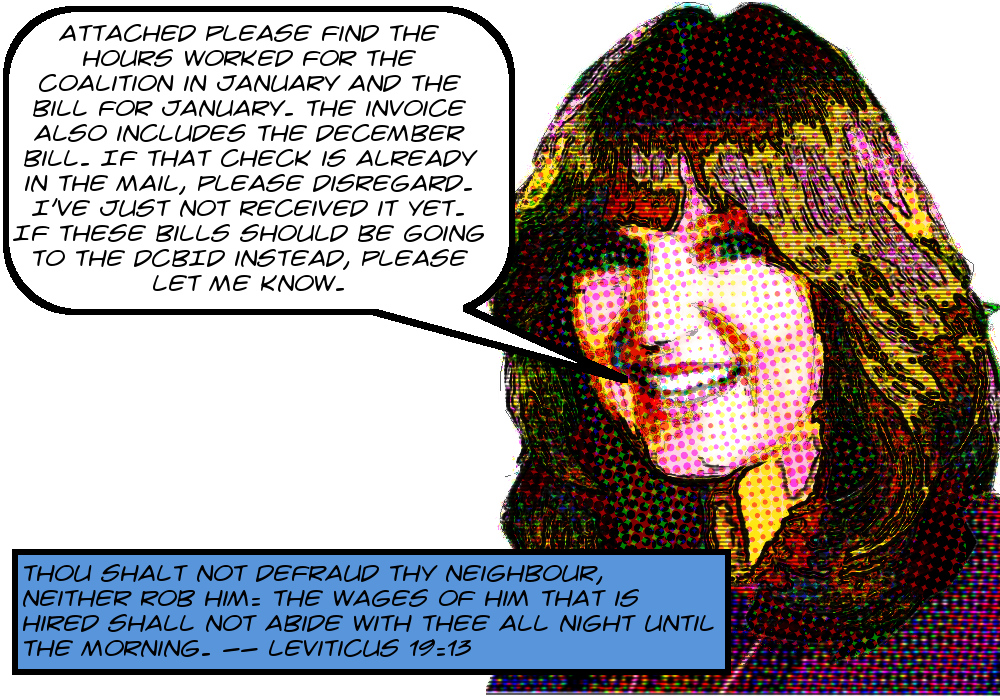 Just what you have all been waiting for, friends! More tales from the massive DCBID document dump of a couple weeks ago. It truly is the gift that keeps on giving!1 And yeah, from one point of view this is yet another inconsequential bit of floof like our recent story about Lena Mulhall, CCALA office manager, using the office UPS account to ship various personal cosplay-linked merchandise hither and yon. But from another, it’s more than consequential, it’s essential evidence of … but of course, you have no idea what I’m talking about cause you haven’t seen the damn email.

You can read the whole chain here or, as usual, turn the page for a transcription. Anyway, remember Laura Mecoy? She’s the hotcha lobbyist who runs a shady little op out of the South Bay known as Mecoy Communications2 who got Kerry Morrison and Carol Schatz a sitdown with the L.A. Times Editorial Board over the street vending issue, giving them an opportunity to spew their poisonous puke all over the table at First and Main.3

And of course, she don’t do that kinda jive for free. After all, she’s a storyteller! A professional storyteller!! And the workman is worthy of her hire, ain’t she? So who’s going to pay her damn bills!? Well, of course, turn the page to find out!

It seems that in February 2017 Laura Mecoy sent a couple months worth of invoices, one unpaid, to Suzanne Holley at her CCALA email address, and the accompanying note read:

Attached please find the hours worked for the Coalition in January and the bill for January. The invoice also includes the December bill. If that check is already in the mail, please disregard. I’ve just not received it yet. If these bills should be going to the DCBID instead, please let me know.

I did receive the $2,000 deposit for the Treasures scripts.4 Thanks so much for that and for all the other work!

Anyway, as usual, Suzanne Holley had no freaking idea what to do,5 so she emailed the Queen of Downtown and zillion dollar woman herself, Ms. Carol Schatz:

Carol – what was the agreement on this? Was BID going to pay for all or a percentage of Mecoy? Rodriguez?

By the way, in case you just joined us in the last year or so, the “Rodriguez” she’s referring to is sinister boutique West Los Angeles lobbying firm Rodriguez Strategies, which was hired by a few BIDs in the Spring of 2015 and evidently, it now appears, CCALA as well, to torpedo any reasonable version of the street vending regulations then being weighed by the City Council. They did such a good job of this that by January 2017, when the first semi-concrete proposal hit the agenda, the whole thing was so totally fucked over and unworkable by humans that, naturally, it was everything that Carol Schatz and her flock of flying BID-monkeys could desire.6

And de natch, count on Schatz! She didn’t get to be Queen of Downtown for nothing:7
I think this should be split 50/50—there was no formal agreement and Jessica was out of town.

And what the hell, right? Didn’t they have this all worked out before they started their conspiracy? Who hires a bunch of shady hall-lurkers like these crews and doesn’t work out the funding in advance? And what does Jessica being out of town have to do with anything? Like she didn’t answer her phone so they decided to charge half of it to her? Just another crazy slice-O-life from Zillionairelandia!

Image of Laura Mecoy, who in fact is not nearly as sympathetic as we’re making her out to be in this picture, is not only ©2018 MichaelKohlhaas.Org, but it’s also a transformative recombobulating of this lil pupper right here.