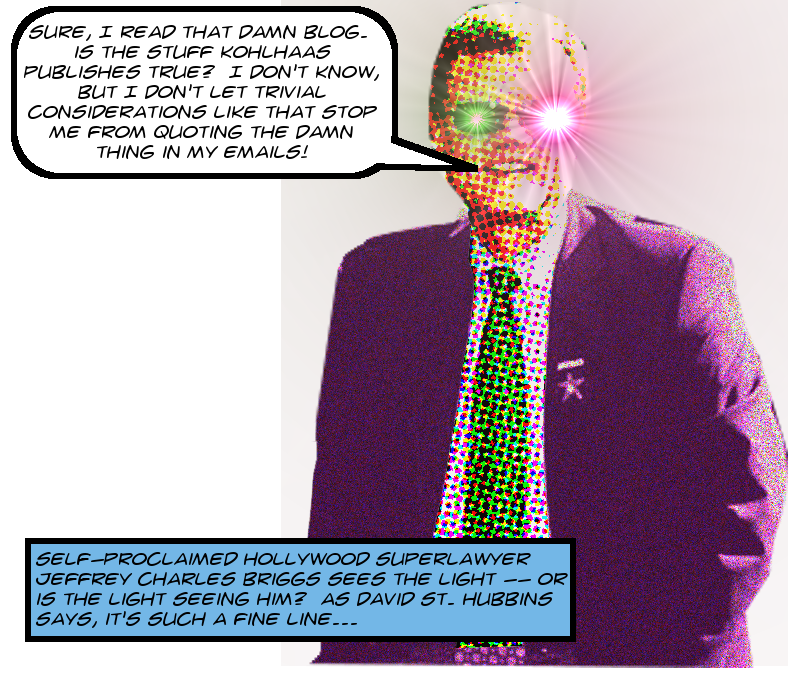 So as you’re probably aware, the staff of this blog is involved in any number of interminable legal battles with various BIDs across the City of Los Angeles for the sole reason that, being zillionaires and therefore suckled on white privilege and Satan’s wine, they cannot, for the damn life of them, just follow the freaking law. And some astonishingly large percentage of this City’s BIDdies are represented in their CPRAfactions by self-proclaimed Hollywood Superlawyer Jeffrey Charles Briggs.1

Therefore it is not unusual for me to sit down in front of the computer to spend a pleasant hour or so arguing with BIDdies about how they better start handing over the damn goods or else …2 and to spend like 80% of that time swapping electrons with the notorious JCB himself. And I have to say, it’s pretty fulfilling, cause the guy has a hair-trigger temper and I get three points3 every time he loses it.4

So anyway, right now we’re into it about the issue of whether two different versions of an email, with different metadata but the same body content, are distinct records or not. He says no, they’re the same. I say yes, they’re different.5 And he’s maintaining his untenable position for two distinct clients. First, the East Hollywood BID and second, the Hollywood Media District BID. And, my friend, turn the page for more snide remarks, evidence that Mr. JCB reads this blog and quotes it, and, de natch, transcriptions galore!

Now, as it happens, I am ably represented by counsel in this matter with respect to East Hollywood, but I’m not represented6 with respect to the Media District. There’s evidently some kind of ethical rule that lawyers have to follow about not contacting people directly if they’re represented by counsel, so in the email chain that is the subject of this post, JCB is getting all fussy about contacting my lawyer instead of me. Not that he’s some kind of stickler about ethical rules on a day-to-day basis, but for whatever reason he takes this one real serious, real serious indeed.7

So I told him, hey friend, don’t contact my lawyer with respect to the Media District! And he’s all like, I gotta do it, friend! And then he let loose with this little stunner: “Once I talk to ■■■■■■■■■ about the EHBID matter, I will get her express permission to discuss the same issue as to the Media District directly with you. I have to be careful about that, my being a Super Lawyer and all.”

Recognize that?! He’s quoting me here and here and here and probably eleventy seven other places as well! I mean, I thought I’d reached the pinnacle of my self-regard when the incomparable Emily Alpert Reyes quoted me in our fair City’s big-time newspaper, but it turns out that that was nothing, not even rising to the level of small potatoes, compared to being quoted by self-proclaimed Hollywood superlawyer Jeffrey Charles Briggs in an email! My career has reached dizzying heights, friends! If I die tonight, I will die happy and fulfilled!

And, without going too much into the meat and potatoes of the actual issues in play, because if we have to file I’ll write specifically on that, here are the last few emails in the chain, because I know some of you are interested in that kind of thing.

I disagree with your view that mere “meta data” renders, for example, the sender’s record (email) separate and distinct from the otherwise identical email stored on the recipient’s server. I have several bases for this view, the correctness of which I am convinced, but as you know this issue now also has arisen in connection with Ms. ■■■■■■■■■’s correspondence with me about the EHBID’s last production of records to you. Consequently I will address my comments on the subject to her in that context by the end of next week, and, if the issue there becomes moot, I then will discuss it with her in the context of the Media District inasmuch as she already represents you in litigation with that District (albeit not on this issue, yet). In both instances, she and therefore you will have a further response on this issue by the end of next week.

Thanks for answering, Jeff.

Please don’t direct any correspondence regarding this pending Media District BID to ■■■■■■■■■■■■■, as she does not presently represent me in that matter.

Also, I’m not sure what you mean by “mere.” Are you characterizing all metadata as “mere” or just some specific but as-yet-undefined subset of metadata as “mere.” Also, is it your contention that one of the two records, which you claim are identical despite their containing different information, under consideration is exempt from production? If so, can you tell me which exemption to CPRA applies?

I am calling all meta data “mere.” If there is no other “different information” in the emails, I view them as indistinct despite the meta data “differences.” However, it may be a moot point and we will know that in approximately the next week, at least for now.

Once I talk to ■■■■■■■■■■■■■ about the EHBID matter, I will get her express permission to discuss the same issue as to the Media District directly with you. I have to be careful about that, my being a Super Lawyer and all.

Image of Jeffrey Charles Briggs is ©2018 MichaelKohlhaas.Org and started its little life in this form.