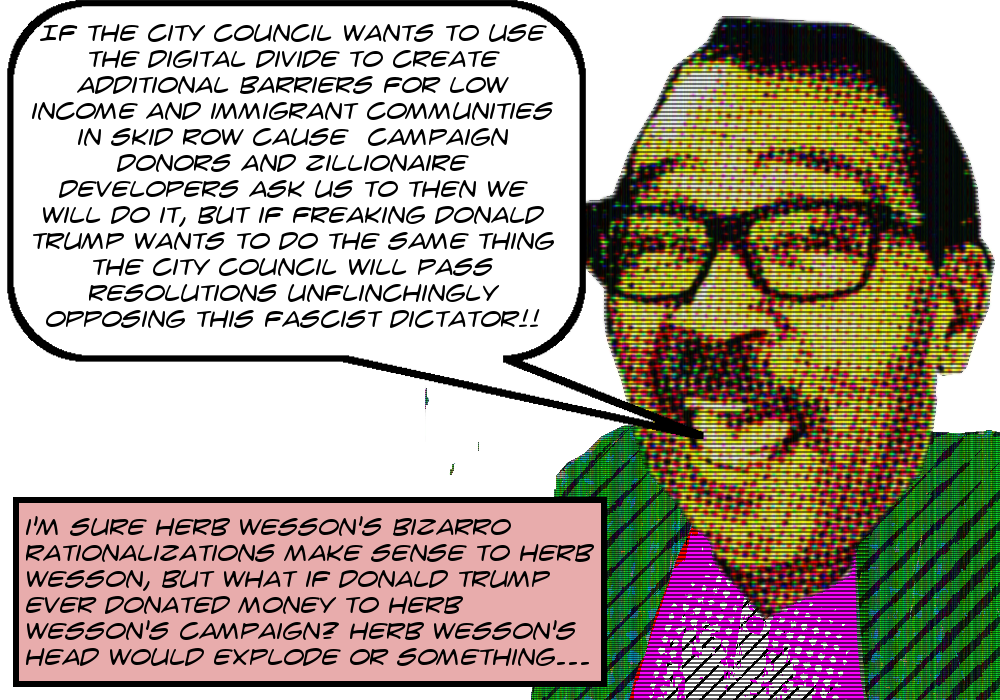 A few days ago, Herb Wesson and his brain-dead gang-of-fifteen cronies at 200 N Spring Street introduced a motion to outlaw civil rights violations in Los Angeles, all without mentioning their dark and bloody work disenfranchising the Skid Row Neighborhood Council formation effort in opposition to everyone’s civil rights. One of the main techniques they used in this nightmarish project was online voting, introduced at the last minute in the face of explicit testimony that electronic politics disenfranchises people who can’t afford computers.

Well, not that anyone who’s paying attention expects consistency out of the Fifteen Lords and Ladies of our City, but when their hypocrisy reaches a certain feverishly hysterical pitch I find there’s nothing for it but to speak up. You see, evidently the Census Bureau in 2020 is going to use online response forms for the first time ever.

And for some reason, the badness of this, the fact of the digital divide and the role it might play in helping the government to erase the presence of the poor, the immigrant, is not lost on our City Council president, Herb Wesson, in this case. That’s why, it appears, that he and Gil Cedillo introduced a motion this morning (transcription after the break) positioning the City to oppose the Census Bureau’s intention to use this new electronic form to ask respondents about citizenship. In particular, saith Herb Wesson:

WHEREAS , the 2020 Census is the first Census that will be performed primarily electronically, which creates additional barriers for low-income and immigrant communities …

So it’s on the record now. Herb Wesson and Gil Cedillo are opposed to using online political forms because they tend to oppress low-income and immigrant communities. Unless, of course, it’s necessary to oppress low-income and immigrant communities at the behest of local zillionaires and campaign donors. Then they’re all for it. Turn the page for the complete text of the motion.

WHEREAS, any official position of the City of Los Angeles with respect to legislation, rules, regulations or policies proposed to or pending before a local, state or federal governmental body or agency must have first been adopted in the form of a Resolution by the City Council with the concurrence of the Mayor; and

WHEREAS, the Decennial Census is one of the key functions of the US government and is described in detail in the US Constitution to ensure accurate representation of people of the United States; and

WHEREAS, many of the communities in Los Angeles face socioeconomic and demographic challenges that require targeted outreach plans in order to adequately identify and serve the population; and

WHEREAS , the 2020 Census is the first Census that will be performed primarily electronically, which creates additional barriers for low-income and immigrant communities; and

WHEREAS, the United States Department of Justice has proposed to include a citizenship question on the 2020 Census form, which may dampen participation rates in immigrant communities because of the Trump administration’s emphasis on deportation and border security; and

WHEREAS, an accurate Census count is difficult to obtain, and adding additional questions increases the time required to complete the process of being counted and therefore deters participation; and

WHEREAS, the City of Los Angeles has a long-standing history of supporting immigrant communities through inclusive integration policies and programs;

NOW, THEREFORE, BE IT RESOLVED, with the concurrence of the Mayor, that by the adoption of this Resolution, the City of Los Angeles hereby includes in its 2017-2018 Federal Legislative Program OPPOSITION to the Department of Justice’s proposal to include a citizenship question on the 2020 Census questionnaire.

Image of Herb Wesson is ©2018 MichaelKohlhaas.Org and was worked up out of a worked over version of this little guy here.