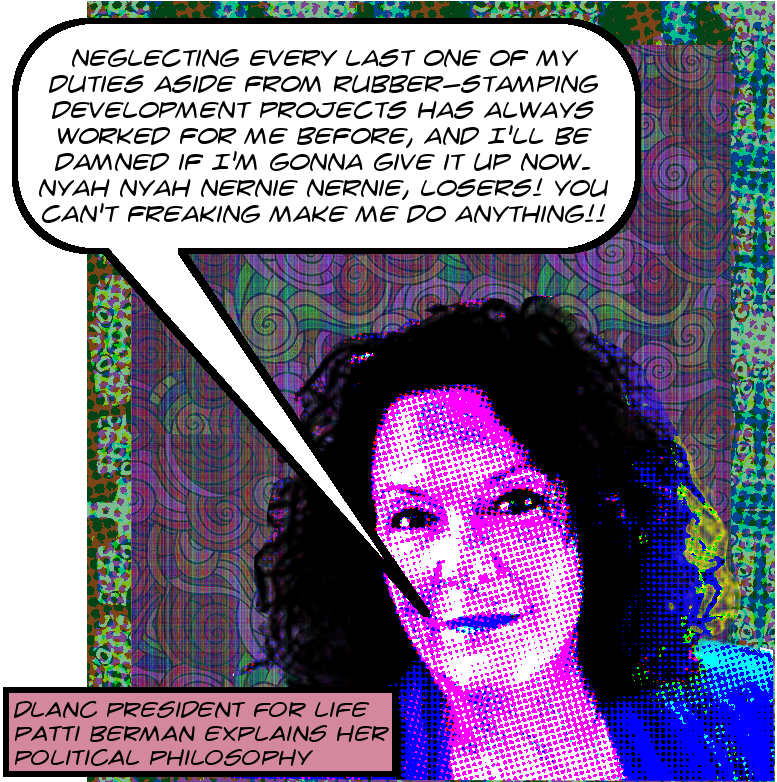 Well, good lord friends! It seems like just yesterday that I filed a grievance against Dandy Dan Curnow, DLANC secretary and law-flouting bow-tie wearing flower-arranging dude about Skid Row for his egregious violations of the Brown Act in concert with piratical POS Jacob Douglas Van Horn. And, mostly, that’s because it was just yesterday.

So imagine my shocked surprise to receive, this very afternoon, less than 24 hours after I filed the durned thing, an email from DLANC President for Life Patti Berman informing me that, despite the fact that I had followed the procedures given in DLANC’s infernal bylaws to the very letter, nevertheless that procedure was in fact invalidated by some random law I’d never heard of and which has remained unincorporated in the Bylaws since it was passed by the City Council in May 2015. Unfortunately it turns out that she didn’t just make the whole thing up, and you can turn the page for a few details. Fortunately for the sane and the righteous, though, this complaint to the DA against Dandy Dan is still active.

So first of all, here’s a transcription of Patti Berman’s email:

And, for your information, the bylaws will be updated to reflect the LAAC section 22.818 as soon as we can resume bylaws changes.

And look way down at the bottom of the law and you’ll see the words: Added by Ord. No. 183,487, Eff. 5-13-15 which tells us that yes, this section was added in May 2015, more than two years ago, and also gives the ordinance number, which is enough to locate the council file, which is CF 15-0067. There’s a lot of interesting stuff in there, not least the public comments, but I just don’t have time to go into it.

What this ordinance does is makes the NC grievance process uniform across the City and also puts it pretty much in the hands of DONE, whereas previously each NC had its own grievance procedures.1 The details are:

And other such limitations, no doubt meant to curb the use of weaponized grievances. And as much as it pains me, I can see the point. However, the rate limit on the number of grievances is surely unconstitutional, and the 30 day thing is horrible. It means that there won’t even be time to get a copy of the minutes of a meeting to support the grievance, and that an NC’s delay with respect to the Public Records Act can save them from a grievance. Anyway, that’s what’s up with that. Stay tuned, though, because the game’s afoot!

Image of La Jefe Patricia X. Berman is a highly modified artistical transmogrifflicaptation of this lil number right here and, as such, is ©2017 MichaelKohlhaas.Org.