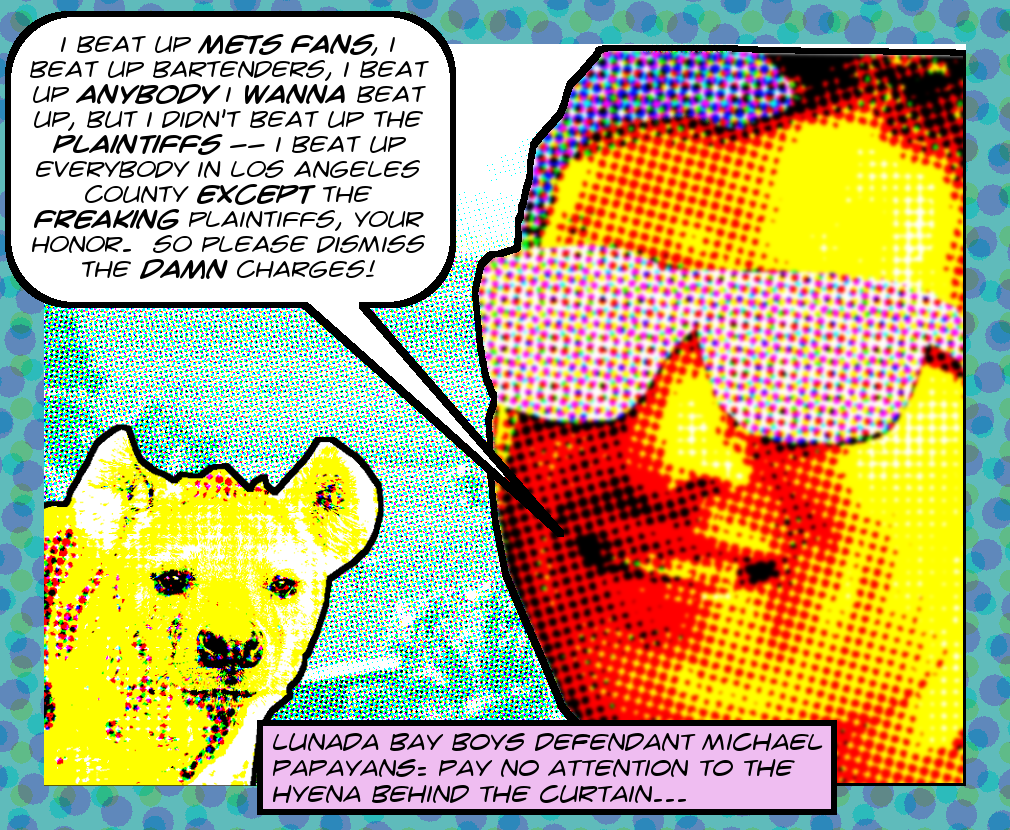 A bunch of paper was filed this afternoon in the Lunada Bay Boys surf localism case, including a hitherto unanticipated1 joint stipulation to dismiss the case against the anonymous minor defendant NF. There’s a transcription of this PDF after the break along with a link to the proposed order that the parties submitted with it.

Also, following along with his putative partners in horridity, Lunada Bay beatdown artist Michael Papayans filed a motion for summary judgment on the basis of the fact that the named plaintiffs, Cory Spencer and Diana Reed, said in their depositions that he didn’t personally beat up either one of them. As always, this motion comes with a bunch of supporting exhibits, mainly excerpts from the plaintiffs’ depositions. There are links and some brief commentary after the break.

Oh, also! There’s yet another telephonic hearing before the magistrate judge scheduled for tomorrow morning, so we can expect yet another minute order telling everyone to cut out the damn nonsense!

Pursuant to Federal Rule of Civil Procedure 41(a)(1)(A)(ii), the parties, through their respective counsel of record, hereby stipulate and agree as follows:

WHEREAS, Plaintiffs initiated their Complaint against N.F. in good faith, but no longer desire to pursue their claims against N.F.;

NOW, THEREFORE, IT IS HEREBY STIPULATED AND AGREED by the parties that all claims against Defendant N.F. shall be dismissed without prejudice by Plaintiffs, as described below:

1. Plaintiffs agree to dismiss without prejudice all claims asserted against Defendant N.F.;

3. Defendant N.F. agrees to produce documents responsive to Plaintiffs’ previously-propounded Requests for Production of Documents notwithstanding this instant Stipulation of Dismissal, and that the Court retains jurisdiction to order such production; and

4. As to each other, Plaintiffs and N.F. agree to waive all claims to attorneys’ fees and costs in this federal lawsuit.

IT IS SO STIPULATED.

Image is ©2017 MichaelKohlhaas.Org and is mashed up out of the finest ingredients the internet has to offer! First there is this image of dude, skooshed up with a public domain hyena and a public domain beach scene.