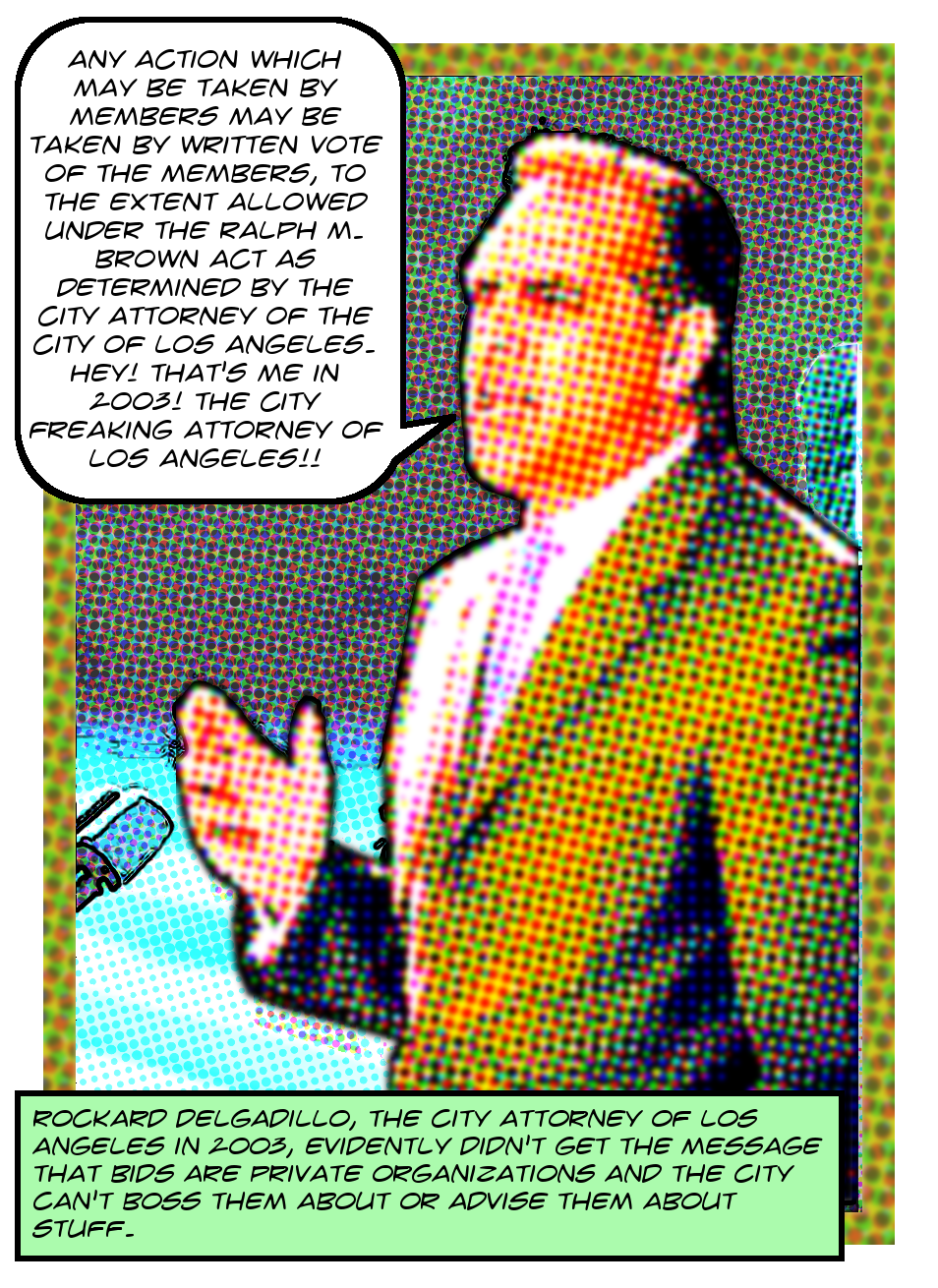 I’ve been collecting copies of bylaws from the property owners’ associations that run BIDs for a while now, and some interesting stuff has turned up. Most egregiously we have the cases of Brown Act violations actually written into the bylaws of the Larchmont Village BID and essentially the same problem with the Melrose Avenue BID. Well, the other day, Rena Leddy, executive directrix of the Fashion District BID, was kind enough to send me a copy of her BID’s bylaws, last amended in 2003, and very interesting they are, indeed!

For one thing, these bylaws reveal that, unlike every other BID that I know of, the property owners in the Fashion District elect their Board of Directors by direct weighted vote.1 Most BIDs seem to be run by self-perpetuating boards, in which the directors choose their successors without any input from anyone else. This is interesting, and may save the FDBID from the kind of stagnation and undue staff influence that one finds in so many of our local BIDs.2

Most interesting, though, are the two places in these bylaws where it appears that the BID didn’t know whether or not their rules would violate the Brown Act, so they wrote language stating that the rules only applied pending determinations of their legality by the City Attorney of Los Angeles. This contradicts the stance currently taken by City Clerk Holly Wolcott, who insists that BIDs are beyond the City’s power to control due to their status as private corporations. She refuses even to tell BIDs to perform explicit requirements of their contract. How strange, then, to see evidence that in 2003 the City Attorney of Los Angeles was making decisions about whether or not the Fashion District BID’s bylaws were Brown-Act-compliant.

First, on page 5, we find the following text:

On any matter other than the election of directors, the members’ vote may be by voice vote or by ballot. Any action which may be taken by members may be taken by written vote of the members, to the extent allowed under the Ralph M. Brown Act as determined by the City Attorney of the City of Los Angeles.

The second instance is on page six:

Proxy voting and the proxy provisions set forth in these bylaws shall only be allowed or applicable if the City Attorney of the City of Los Angeles determines that proxy voting is permitted under the Ralph M. Brown Act. If determined to be permitted, proxy voting shall be subject to the procedures set forth below.

Of course, the Brown Act forbids any kind of action to be voted on by mail or by proxy. All votes must be made in person at properly noticed public meetings after allowing for public comment. So far I have no evidence of what determination, if any, was made by Rockard Delgadillo, who was City Attorney at that time. It doesn’t actually matter, though. What’s important is that everyone just took it as natural that the City would give advice to the BID with respect to their legal obligations under the Brown Act (and, by extension, surely, CPRA as well).

Now, as noted, the City takes the opposite position. There is some circumstantial evidence that occasionally the Clerk’s office will intervene when BIDs are violating the Brown Act at least in a particularly egregious manner. See, e.g., this instance with Larchmont Village and this other instance with the Historic Core. But in general the City denies that it has any power over the BIDs whatsoever.

The question of how much the City is willing to regulate BIDs has been under discussion for a long, long time. For instance, in 2001 the Clerk proposed to institute an explicit procedure for accepting complaints against BIDs and the BIDs freaked the fuck out. There’s probably no way to discover at this late date when the City definitively settled the argument in favor on not accepting any complaints or giving any opinions on the legality of the BIDs’ policies. If I had to speculate, though, I’d guess that Holly Wolcott decided to stop ignoring complaints and to pretend to have no power to regulate BIDs right around the time that I started complaining about them. The squeaky wheel doesn’t always get the grease, sometimes everyone just puts in their earbuds and cranks up the tunes.

The source image of Rockard Delgadillo is from here, and the version you see above is ©2017 MichaelKohlhaas.Org.