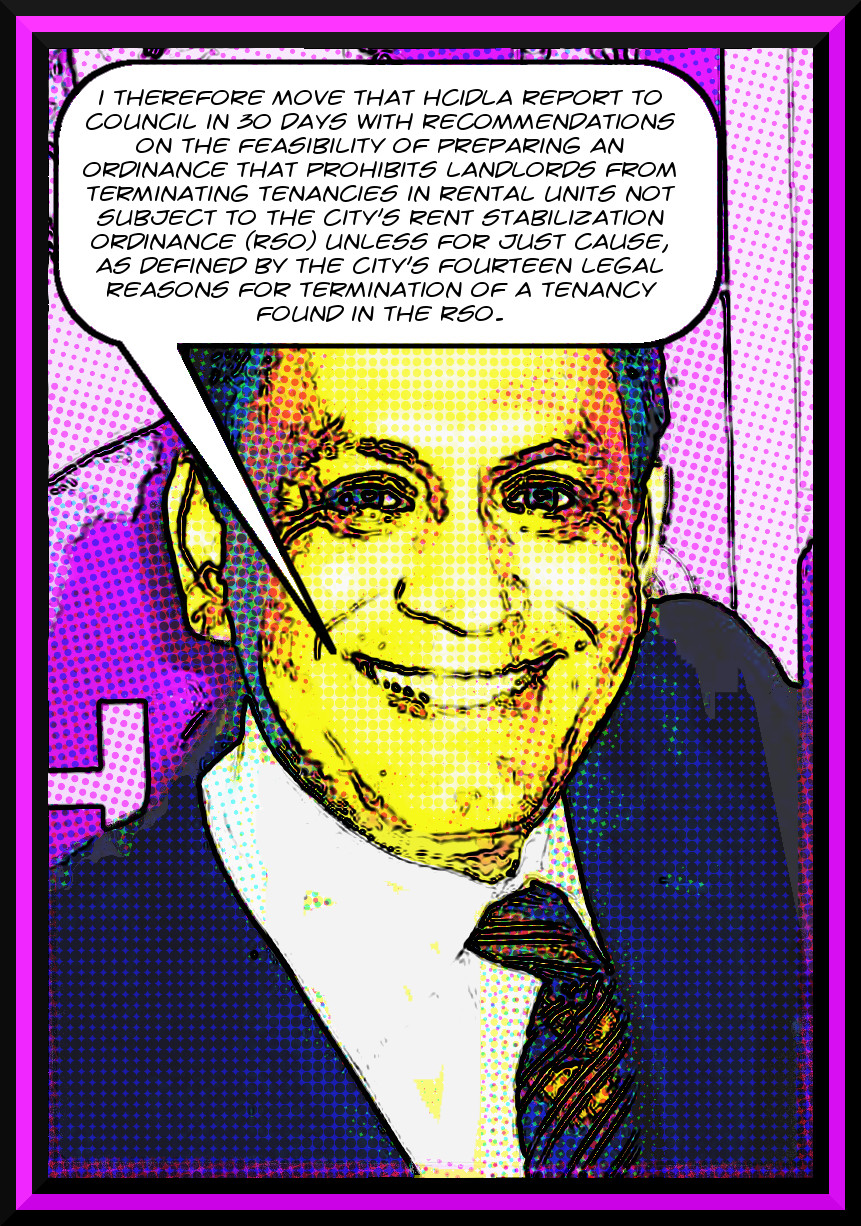 Turn the page for the complete text of the motion.

The City of Los Angeles is experiencing a severe housing supply and affordability crisis that requires action by the City. The affordability crisis threatens the public health, safety, and welfare of our residents. A May 2016 report authored by California Housing Partnership Corporation (CHPC) and Southern California Association of Nonprofit Housing (SCANPH) found that median rent in Los Angeles County had increased 28 percent since 2000 while median renter household income had declined 8 percent when adjusted for inflation. Los Angeles renters need to earn 3.9 times the local minimum wage to afford the average monthly asking rent of $2,108. Los Angeles County’s lowest-income renters spend 71 percent of income on rent, leaving little left for food, transportation, health, expenses, and other needs. To afford this average monthly rent, individuals making the City’s median income of $49,500 would have to spend more than 50 percent of their income on rent. According to the Los Angeles Times, many of the neighborhoods in CD 1, CD 8, CD 9, CD 10, CD 13, CD 14, and CD 15 have median incomes below $35,000. The April 2017 Zumper National Rent Report lists Los Angeles as the sixth-most expensive rental market in the nation with rental prices for a one-bedroom jumping 3 percent in March from the previous month.

Displacement through evictions has a direct impact on the health, safety and/or welfare of Los Angeles citizens by uprooting children from their schools, disrupting longstanding community networks that are integral to citizens’ welfare, forcing low-income residents to pay unaffordable relocation costs, segregating low income residents into less healthy, less safe, and more overcrowded housing that is often further removed from vital public services and leaving residents with unhealthy levels of stress and anxiety as they attempt to cope with the threat of homelessness.

Bay Area Cities are implementing new eviction and rent stabilization measures in response to their severe housing supply shortage and affordability crisis. Almost all of them (Alameda, Emeryville, Mountain View, Oakland, and Richmond) include provisions that prohibit landlords from terminating tenancies of rental units except for “just cause”. The Housing and Community Investment Department (HCID) and City Attorney should provide Council with recommendations for instituting similar laws in Los Angeles.

I THEREFORE MOVE that the Housing and Community Investment Department in consultation with the City Attorney, communicate with cities in the Bay Area and report to Council in 30 days with recommendations on the feasibility of preparing an ordinance that prohibits landlords from terminating tenancies in rental units not subject to the City’s Rent Stabilization Ordinance (RSO) unless for just cause, as defined by the City’s fourteen legal reasons for termination of a tenancy found in the RSO.

Image of Gil Cedillo is a modified version of this image from Wikimedia, and it’s now ©2017 MichaelKohlhaas.Org.