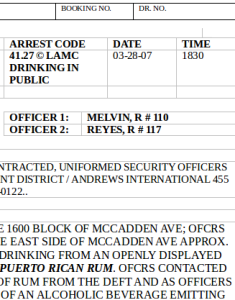 Well, getting records out of the Downtown Center BID is like pulling teeth from a fricking hippopotamus,1 but after almost four months and one exceedingly detailed complaint to the Los Angeles City Clerk about their general bloody-minded uncooperative stonewalling, they have released a bunch of records relating to their public relations firm, Macy + Associates.2 You can find this material here on the Archive. Note that they’re, as usual, mercilessly and certainly illegally redacted. I’m working on this, but I don’t expect any results quickly.

Also, the big prize, obtained yesterday, is 2007 arrest reports and daily activity logs from the Andrews International BID Patrol. These are also on the Archive:

There are almost certainly significantly many arrest reports missing, and some details on this may be found after the break if you’re interested.

According to the 2007 arrest summary spreadsheet provided to the HPOA by Andrews International, there were 2349 arrests that year, but the HPOA only gave me 2039 reports. At this late date it’s probably not possible to figure out what happened to the rest of them. And here’s a little teaser: today I got information from the City Attorney about prosecutions of some of the BID Patrol’s most-arrested people. I’m not even close to done analyzing it, but it should make it possible, finally, to quantify the quality of the arrests they make and thus understand whether or not they are, ultimately, just harassing people rather than enforcing the law. But that’s for another day, I hope tomorrow!