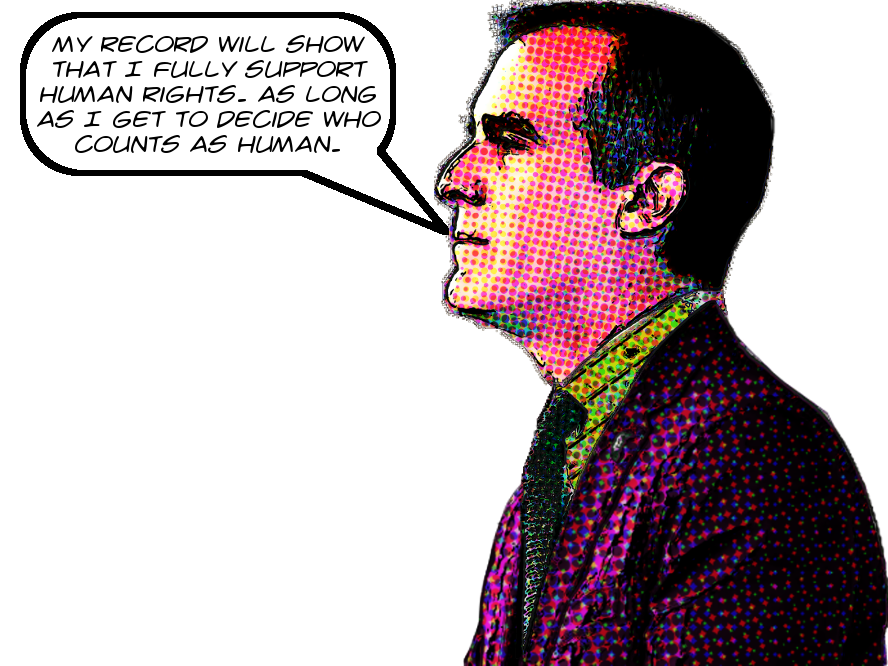 Last week USC hosted a celebration of the 70th anniversary of the Universal Declaration of Human Rights. Los Angeles mayor Eric Garcetti was invited to speak, but his speech was repeatedly interrupted by protesters from LA CAN, from the Skid Row Neighborhood Council Formation Committee, from NOlympics LA, and others.

This prompted an editorial from the L.A. Times entitled Shouting down Mayor Garcetti isn’t ‘speaking truth to power,’ the theme of which is well summarized by this excerpt:

But protesters can overplay their hands. These days, tolerance of other people’s views seems low, and there’s an unhealthy willingness to silence one’s opponents rather than engage them, debate them and out-argue them. That’s a shame.

Protesters who shout down a speaker — or shut down a public meeting — aren’t just expressing their own views; they’re making it impossible for others to share theirs.

It’s silly almost beyond comprehension to believe that Eric Garcetti can be silenced by protesters, that anyone interrupting him can make it impossible for him to share his views. Every word the man says is reported on extensively. His press releases are reprinted or recited verbatim by major news outlets. His press conferences are attended by reporters from all over the state, even the nation. A few people interrupting a speech isn’t making it impossible for Eric Garcetti to share his views.

And why in the world does the Times think there’s something wrong with protesters being unwilling to debate or out-argue Eric Garcetti? Do they really believe that if Eric Garcetti just hears the right argument he’ll stop allowing his LAPD thugs to kill young men for no good reason, stop sending them out to arrest homeless people and incinerate their belongings, that he’ll stop accepting campaign money from real estate developers in exchange for enabling them to destroy neighborhoods and cause more homelessness, that he’ll suddenly see the light and stop being evil?

It’s not going to happen like that. He’s heard the arguments already. If he hasn’t seen the damage he’s doing, the pain he’s causing, the killings he enables, all for the sake of his campaign coffers and his career, it’s because he doesn’t want to see. He knows his constituency and he’s giving them exactly what they want from him. No reasoned analysis is going to change that. These kind of repeated demands for civil discourse in the face of racist police murders, genocidal policies on homelessness, gentrification by force of arms, are incredibly disingenuous.

And strangely, it doesn’t seem to have occurred to the LA Times that the protesters already know they’re not going to change Eric Garcetti’s mind about anything. These protesters are accomplished, able, serious people, the value of whose contributions to civil society in Los Angeles is incomparable. None of them have done what they’ve been able to do by wasting their time trying to debate LA politicians into being nice. What, the LA Times pointedly did not even consider, might such protests actually accomplish?
END_OF_DOCUMENT_TOKEN_TO_BE_REPLACED