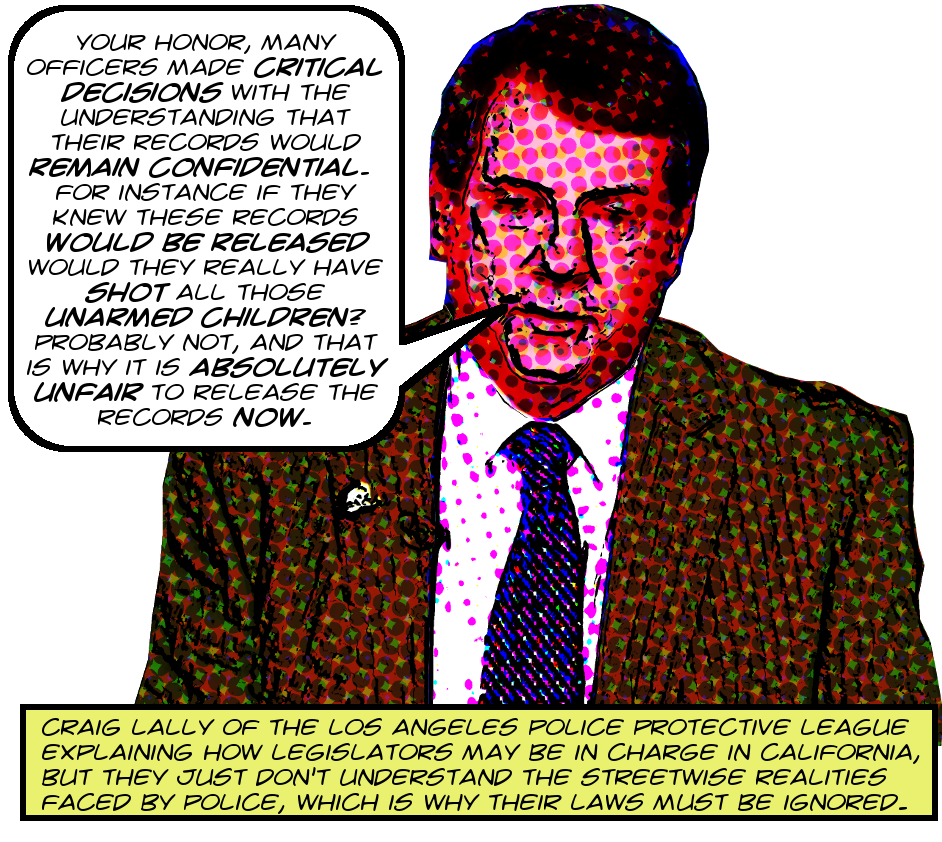 If you’re reading this blog you’re very likely aware that on January 1, 2019 the monumental SB1421 took effect, basically ending exemptions which, until now, have prevented the release of records documenting even the most extreme cases of police misconduct. Police agencies all over the state are freaking out about this, and some even asked the California Supreme Court to declare that the law didn’t reply retroactively. The justices shot down that malarkey last week, and then upped the stakes by asking to be briefed on whether the new law required the release of even more material than had been anticipated.

And thus police departments are beginning to release these records. For instance, there’s this case of an officer in Burlingame who’d been fired for offering to help a drunk driver with her charge in exchange for sex. And this newly released information evidently has the San Mateo County D.A. reconsidering his earlier decision not to criminally charge the officer. Which is how this law is supposed to work. And it seems that that’s how it is working.

Except, it turns out, in the City of Los Angeles. It doesn’t seem to have been widely reported on,1 but it seems that here, the Los Angeles Police Protective League filed an emergency petition on December 31, 2018, asking the Superior Court to stop the LAPD from applying SB1421 retroactively. And shockingly, astoundingly, appallingly, the court agreed and issued an order to that very effect, which is in effect at least until the scheduled hearing on February 5, 2019.2

The LAPPL’s whole argument seems to be that officers have made crucial career decisions relying on the privacy of the records, and that therefore it would be manifestly unfair to publish them now. For instance, according to Craig Lally in a sworn declaration, police officers often agree not to appeal findings of misconduct even though they think they’re innocent just to get things settled quickly and not disrupt operations. But, says Lally, they would never have done this had they known that the records would be published at some point.3

And apparently there’s really nothing to be done about this until the hearing. We are just not going to get these records right away. Oh, except it’s possible to read all the pleadings filed in the case. The City of Los Angeles hasn’t yet responded, but I obtained copies of everything that there is so far and published it here on Archive.Org. It’s upsetting, but it’s better to know. Turn the page for a linked list of everything and a transcription of selections from Lally’s declaration.
END_OF_DOCUMENT_TOKEN_TO_BE_REPLACED