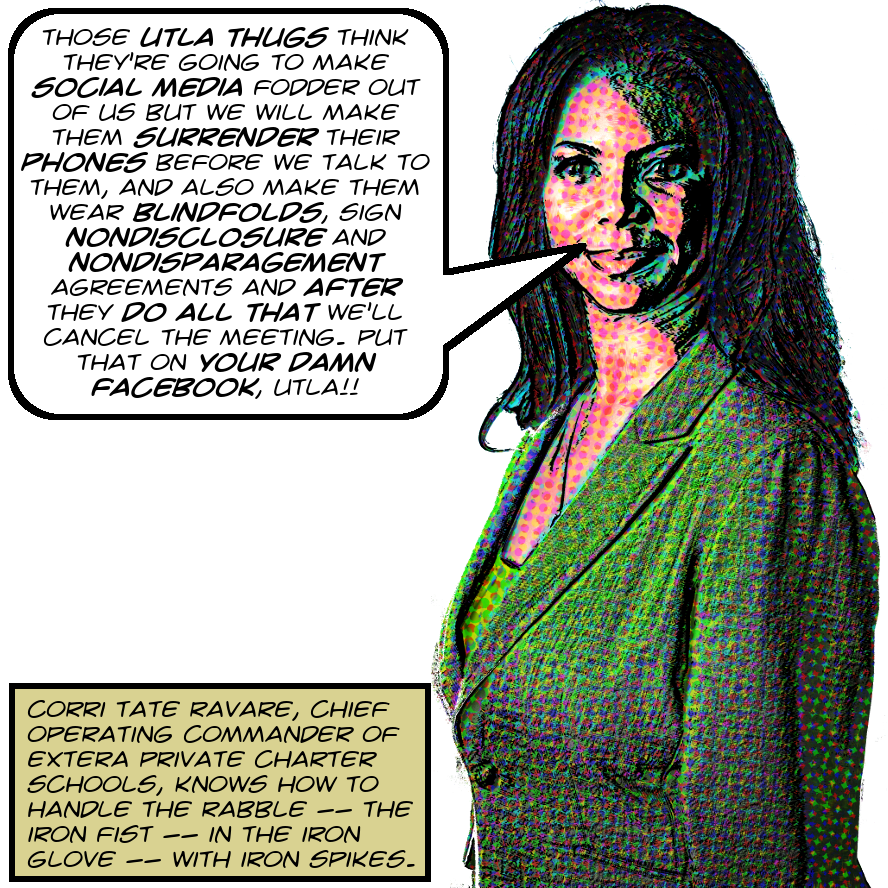 Earlier this year there were a series of protests against Extera Charter Schools co-location at Eastman Avenue Elementary School in Boyle Heights organized by Centro CSO and the United Teachers of Los Angeles. One of these protests was held at the March 2019 meeting of the Extera board of directors, and you can watch a video of it here on the Facebook page of activist group Eastside Padres Contra La Privatizacion. It is well worth your time to watch these powerful, clear-eyed parents bearing witness to the damage that this charter school does to their community.

The protest set off a fairly crazed and surprisingly whiny-baby series of responses from the privatizers. This story is revealed by emails recently produced to me by Extera in response to a request under the California Public Records Act, a selection of which is available here on Archive.Org. In particular Extera staff began stalking the protesters on social media, complained about them to LAUSD’s Charter School Division and, separately, to board member Monica Garcia. And to the Los Angeles Police Department, who they tried to get to commit to attending future board meetings to arrest troublemakers.

Had their lawyer, Lisa Corr no less, name partner at privatizing powerhouse law firm conspiracy Young Minney Corr, advise them on how to lawfully eject people from public meetings. Arranged to meet privately with Ilse Escobar, perceived by Extera Commander of Operations Corri Ravare to be the protesters’ “ringleader” and other protesters, floated plans to confiscate their cell phones at the meeting, and then whiningly cancelled the meeting on short notice. Consulted continuously with the California Charter School Association on messaging against the protesters.

Attended a meeting of Centro CSO to spy on the opposition. Cultivated informants to provide information on Escobar. And as if not more creepy than any of these severely creepy actions is the fact that Extera asked members of the public to sign in at their meetings and then used the personal contact information collected to help them stalk the protesters.1

This kind of reaction to community disdain is commonplace among charter school boards and, for that matter, their privatizing colleagues in business improvement districts. They’re not used to attention from the public, and somehow they think they ought to be immune to it. They’re happy to take public money from the government to carry out defined public governmental purposes, but as soon as the public treats them like the government agencies they are under California law, they flip out and use that public money to fund these insane, immature responses.

Regular politicians and the staff they hire are used to protests, criticism, and petitioning for redress of grievances. For the most part don’t react so aggressively, so insanely. Can you imagine if it came out that members of the LAUSD School Board or the LA City Council had sent infiltrators to community meetings, or used information gathered from sign-in sheets to investigate protesters by interviewing their acquaintances? It would be a huge scandal, and rightly so. It’s no less scandalous when these charter operators do it. Read on for transcribed selections from some of the emails. And you can download the whole set from Archive.Org as well.
END_OF_DOCUMENT_TOKEN_TO_BE_REPLACED