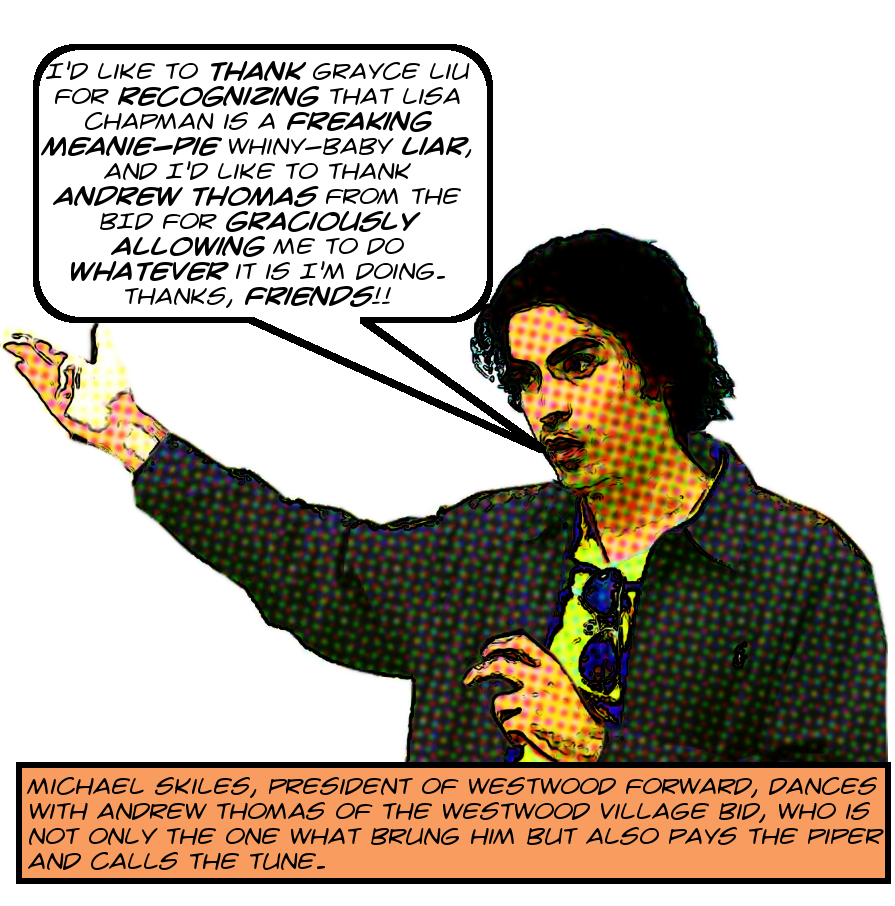 You may recall that I recently received a moderately sized set of public records from the Westwood Village BID, some of which I wrote about the other day. You can look at the whole collection here on Archive.Org,1 and one of these is the text for today’s sermon, a conversation amongst Michael Skiles, Grayce Liu of the Department Of Neighborhood Empowerment, and Lisa Chapman, president of the Westwood Neighborhood Council.

There’s a transcription and more commentary after the break, of course, but here’s a brief summary of what went on. Lisa Chapman wrote to Grayce Liu telling her that she heard Michael Skiles say that Westwood Forward did not choose the date of the election, which was not on a weekend as NC elections usually are. Grayce Liu wrote back in her inimitably condescending manner saying some nonsense that sane people can barely credit.

Michael Skiles wrote to Grayce Liu thanking her in his inimitably sycophantic manner and explaining that weekday elections were agreed on by him and Andrew Freaking Thomas, who sane people want to know why is this guy involved at all? What, we all want to know, do BIDs have to do with making detailed decisions like this about NC matters?

Then, the absolute kicker, Grayce Liu wrote back to Michael Skiles stating that the City Clerk forbade subdivision elections to be spread out over multiple days “because of voter security issues.” Of course, this is horrific and shocking given that for the Skid Row NC subdivision election Grayce Liu herself allowed putative pop-up polls to take place on multiple days in multiple locations including restricted access buildings emphatically NOT open to the public. And now no one at the City can actually audit the votes cast in that election, which suggests strongly that there were very serious, as yet undiscovered, “voter security issues,” which no one at the City cares about.

But of course, “voter security issues” are going to be cosmically important in elections like this Westwood one, where zillionaires and their financial interests fall on both sides of the question. In a case like Westwood, because zillionares disagree, every vote truly does count, so the most secure practices must be followed by the City, and the City recognizes this. In a case like Skid Row, where the zillionaires were unified on one side, voter security would have just gotten in the way of stealing the election. Anyway, read on for the details.
END_OF_DOCUMENT_TOKEN_TO_BE_REPLACED