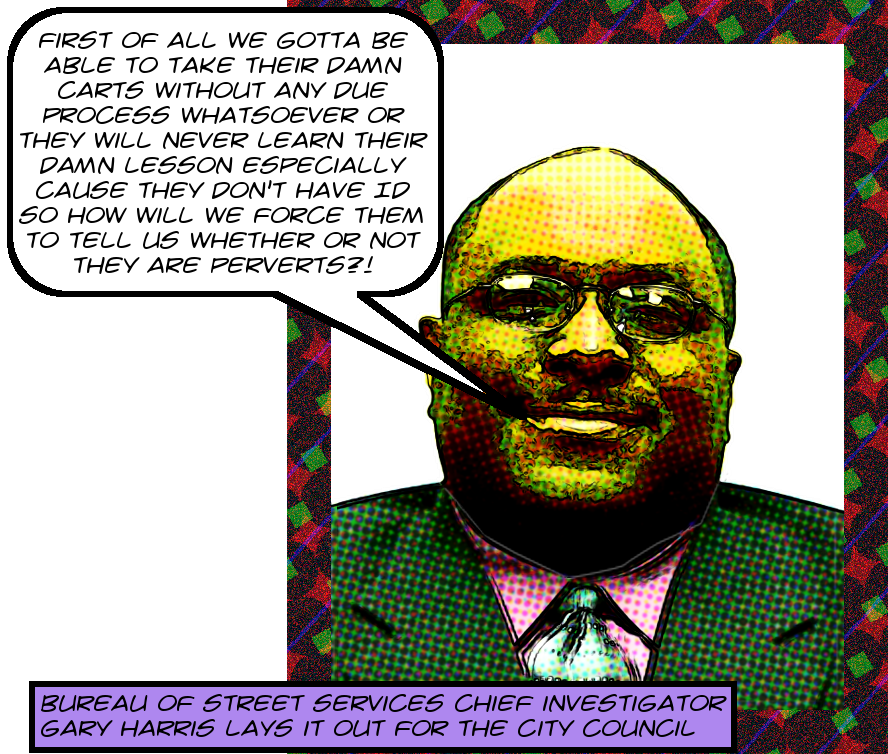 Even though it’s looking reasonably likely that Ricardo Lara’s deeply excellent sanity in street vending bill, SB 946, will become law when the legislature reconvenes very soon, the City of Los Angeles is still grinding away at developing its own regulation.1

This whole mess, which we have been tracking forever through every last weirdo permutation, is memorialized in Council File CF 13-1493. And this is just a short note to announce that tonight Gary Harris, the chief investigator of the Bureau of Street Services, filed his report-back announcing what his department would like to see added to the law.

And its as unhinged as any of the other unhinged contributions to this discussion over the years. First of all, Gary Harris argues that the City must reserve the right to confiscate the equipment of unlicensed vendors without hearings and without appeals and, it appears, without benefit of the United States Constitution.2 Even weirder, he wants to use LAMC 56.11 as authority to confiscate carts.

This is of course the infamous anti-homeless personal property confiscation measure. It’s written to allow the confiscation of unattended personal property, which obviously doesn’t apply to street vendors’ equipment. Additionally, a federal court has already suspended enforcement of LAMC 56.11 in Skid Row, and it’s pretty clear that the only reason enforcement hasn’t been suspended City-wide is that no one has asked a court to do it. LAMC 56.11 is itself unenforceable and is hardly a tool to be basing a sustainable street vending policy on.

Second, Gary Harris wants to require background checks for vendors that vend near schools to make sure they’re not perverts or sex criminals. It all just really makes me wonder what City, what universe, these people are living in. Here’s the deal, Mr. Gary Harris. There are already vendors vending near schools. There are already unlicensed vendors.

Turn the page for some more commentary along with a transcription of Gary Harris’s report-back.
END_OF_DOCUMENT_TOKEN_TO_BE_REPLACED