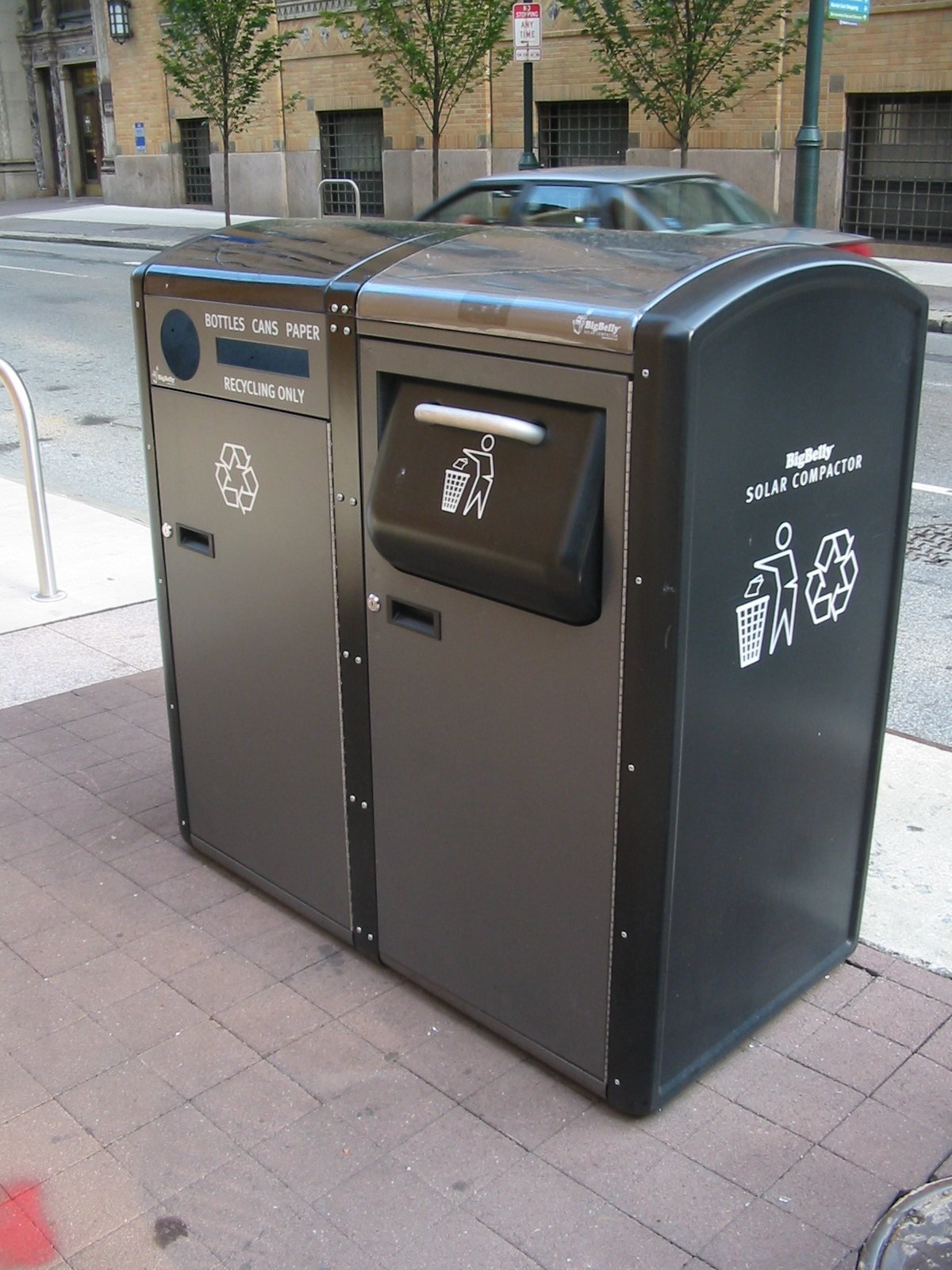 In January 2021 Lorena Ochoa of the Los Angeles Conservation Corps emailed Ellen Endo of the Little Tokyo Business Improvement District to tell her that one of their Big Belly trash cans often had hypodermic needles in it and that therefore they wouldn’t service it any more:

Just want to bring to your attention the high volume of syringes being tossed inside this bigbelly. I cannot have the corpsmember driver service anymore bigbelly’s under these conditions. It’s a safety hazardous matter taking syringes to the City of LA sanitation site. I’m going to attach a list of Call Active Clean up companies that can come out and service these types of matters.

Good morning, Adriana. We need your advice urgently. I have been informed by our street maintenance provider, LA Conservation Corps, that they will no longer service the Big Belly trash bins due to the number of syringes found inside the bin across from Toriumi Plaza on First and Aiso Sts. See their communication & photo below.

The weekend is here, outdoor dining is restarting, and it will be just a matter of hours before the BIg Bellies are spilling over with trash. We need to consider removing the Big Bellies and replacing them with standard LASAN trash cans.

I know you are as concerned as we are, not only about the trash but about the growing health hazard posed by the large encampment across the street.

And because Endo knows who really runs the City she forwarded this email to LAPD officer Adrian Lopez. Because she knows her audience she embellishes her complaint to include the nearby homeless encampment:

FYI. Here’s what I sent to Adriana Velasquez in Councilmember DeLeon’s office today. LA Corps notified me this morning about needles in the trash bin on 1st Street across from the Aiso parking structure. LA Corps won’t empty the bins anymore but will continue to provide other services.

And Lopez doesn’t care a whit about trash cans, City services, homeless people’s lives, and so on. He cuts right to what he thinks is the chase and, like many needless LAPD pursuits, it mostly has to do with bullying and violence:

Thanks Ellen, that platform [sic] is horrible and providing services to the homeless is useless. The homeless need to be removed from that plaza and the area cleaned and restored back to its original state.

Endo, being the bootlicking badge bunny1 she’s well-known to be, had only two words for Lopez in response to this unhinged outburst: “Yes, Sir!” To which Lopez responds:

I’m hoping DeLeon’s office can help and take the lead on this. Maybe if Mr. DeLeon visits and see the proximity to the restaurants and parking for the patrons?

These Big Belly trash cans, by the way, were installed all over the City a few years ago by BIDs and a few council districts.2 They’re expensive, clunky solar-powered trash compactors. They’re always broken because of course they are. It’s not even clear what they’re supposed to do. Anyone who actually uses City streets would have been able to see that they’re useless and they suck and would never have installed them.

I certainly agree that LACC kids shouldn’t be anywhere near used needles, but the story here isn’t what Endo and Lopez think it is. Here’s a possibly more fruitful way to see it. First the City of Los Angeles created the Little Tokyo BID for its own purposes and then immediately ceded a number of municipal responsibilities to it.

Ellen Endo, a self-proclaimed journalist with presumably no expertise in municipal sanitation, installed a bunch of trendy junk faux trash cans that no one wants to deal with. She realized this too late and asked LA San and her Council Office to get rid of them. Endo also involved Adrian Lopez, a police officer, in the discussion.

As cops will do he seized on Endo’s complaint to push his cop theories about homelessness which, as cop theories do, amount to a bunch of mutually inconsistent just-so stories offering violence and force as the only solutions to every social problem. Endo’s a violence junkie, as people in her position often are, and agrees enthusiastically.

Lopez then realizes he needs permission from the Council Office to destroy an encampment and decides that CD14 rep Kevin De Leon just must not realize how hard it is for people eating in restaurants to have to look at homeless people. I have no idea what happened next, but it’s not important. If they cleared the encampment it’s back now or it will be, and if they didn’t it’s still there.

But everyone forgot about the damn trash cans. As of April 7 Endo was still trying to deal with them. These ignorant, arrogant people run whole neighborhoods at the city block level. They have immense amounts of unchecked, uncheckable power, and they can’t even keep their minds on small-scale easily solvable problems long enough to address them effectively.

These are people who look at a community of human beings forced to live in deadly conditions on public streets and see them primarily as a threat to the smooth operation of their stupid high tech trash cans and a threat to the neighborhood fine dining aesthetics.

If the City wanted to fix these problems, from trash cans all the way up to homelessness, they could do it. They could start by reclaiming all their ceded responsibilities and hiring people on in high-quality permanent positions to do all the privatized municipal work. They could build publicly owned public housing with no private developers skimming money.

They could hire people who know and care about trash cans on City streets to deal with trash cans on City streets rather than cops and real estate shills. But their priorities are elsewhere and they see the provision of municipal services either as a distraction from their real work or as patronage to ensure their re-election. They have no problem letting the City burn on their watch. It’s what they were engaged to do.

Image of Big Belly trash can courtesy of Wikimedia.