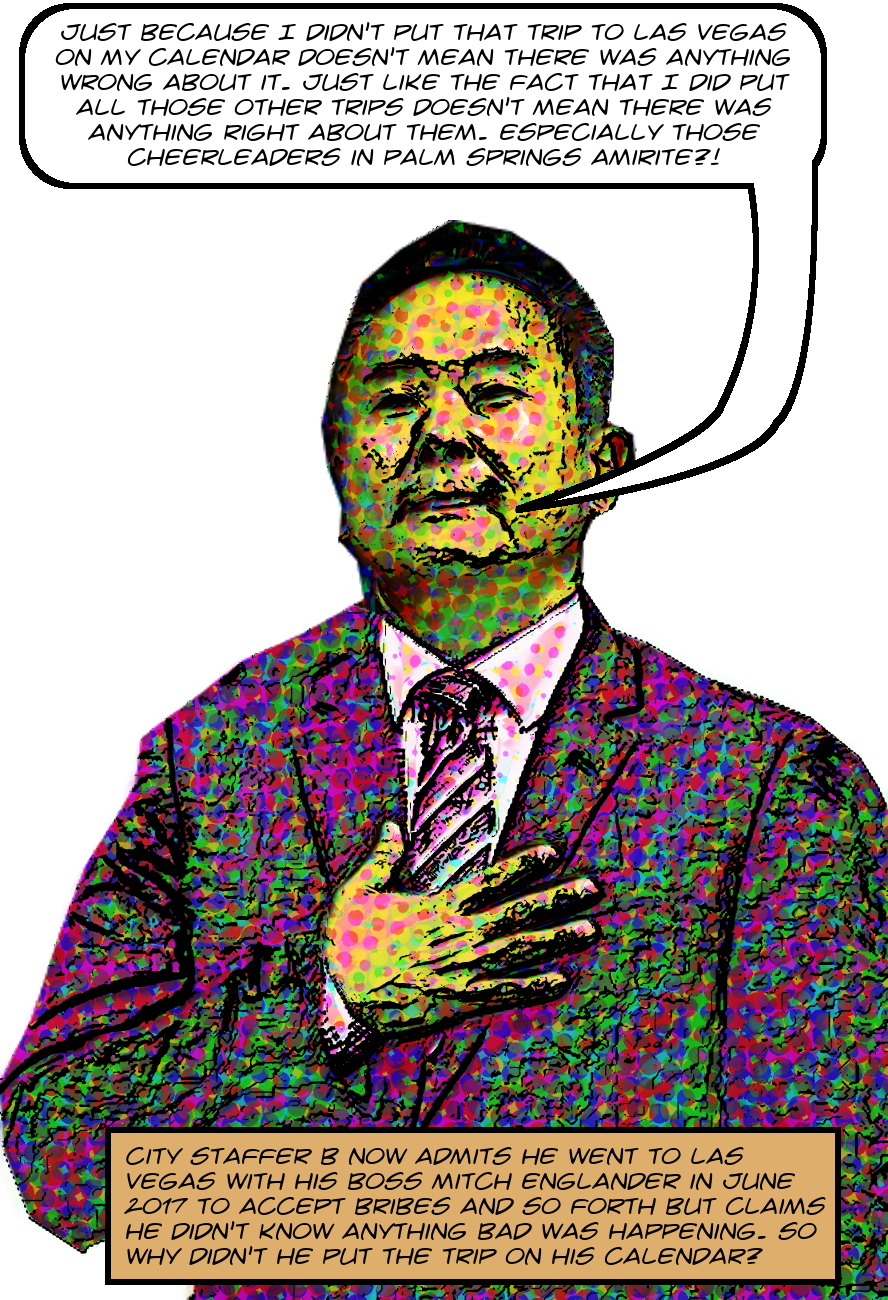 By now the whole world knows that former Los Angeles City Councilmember Mitch Englander is a sleazy corrupt fellow who was in Las Vegas in 2017 on June 1, 2, and maybe 3 being bribed with cash, liquor, and women and that he was accompanied on this funhouse mirror hero’s journey by his as-yet-unindicted co-conspirator and then-chief-of-staff John S. Lee, sitting Councilmember for the Twelfth District, known in the ever-increasing number of official indictments and mockingly on Twitter as City Staffer B.1

Lee admits that he went along with Mitch on the trip, but he continues to maintain that he did nothing wrong and, says Lee, that he “was unaware of any illegal activities for which Councilmember Englander is being charged.”2 Not only did, according to himself, do nothing wrong but also, according to his spokesperson Grace Yao3 he especially “absolutely [was] not” supplied with women. It’s certainly curious that Lee denies everything but he extra-super-duper denies that part.

Almost as curious as the fact that Lee omitted that June 2017 trip to Las Vegas from his official 2017 appointment calendar, which I recently obtained from the City of Los Angeles via a Public Records Act request. You can see that he had a full day of actual work on June 1. Presumably he traveled to Las Vegas with Mitch that night. On June 2 he has nothing at all listed except a late-night 11 PM meeting with a mysterious as-yet-unidentified figure known as Justin Cruz.4 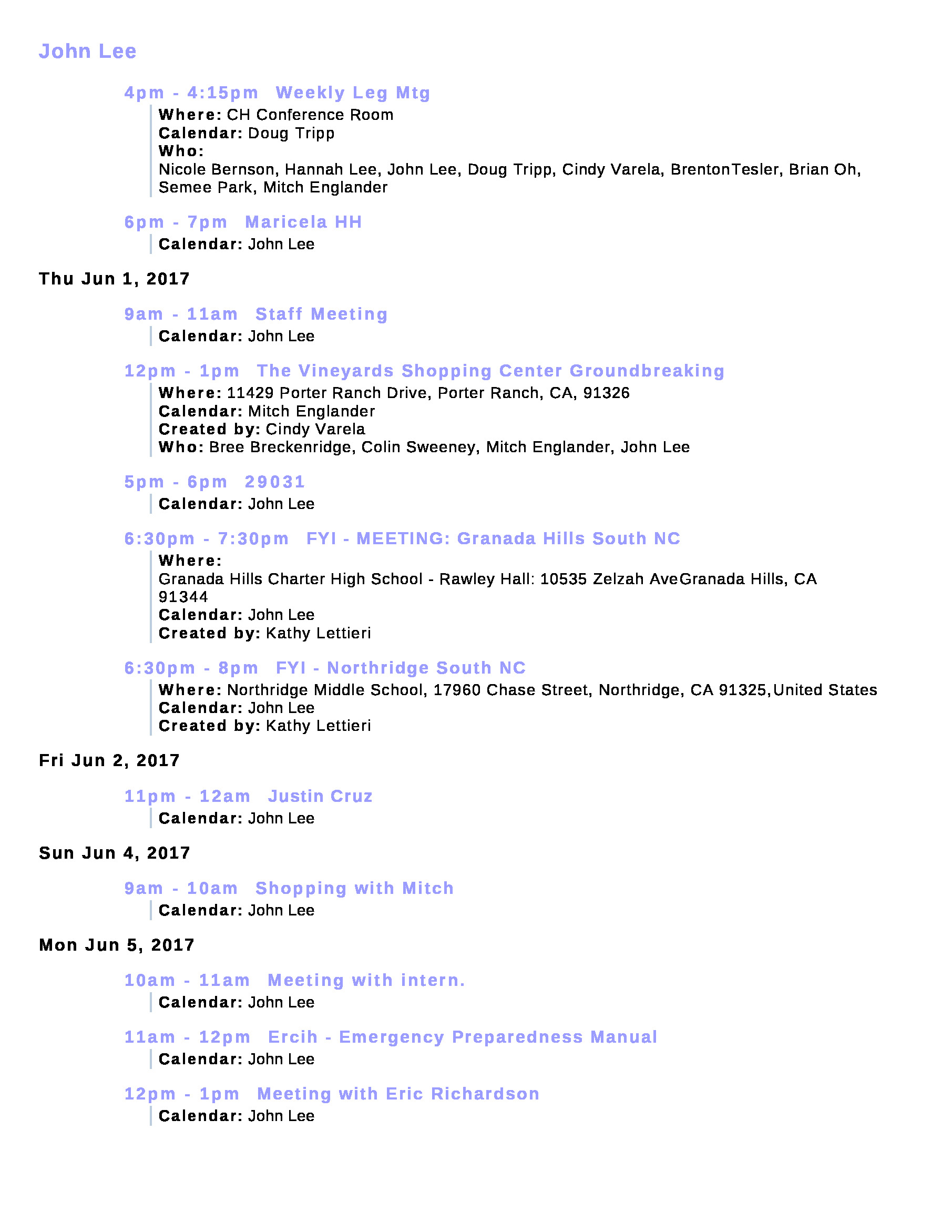 June 3 isn’t on the calendar at all, and on Sunday, June 4, Lee’s only appointment was “Shopping with Mitch.” Mitch, no doubt, had his $10,000 in illegal cash bribery money burning a hole in his corrupt little pocket and needed someone to spend it with to whom he wouldn’t have to explain where it came from. Lee, as we’ve seen, denies that he knew that Mitch was up to anything illegal on the trip.5 Which, if true, implies that Lee thought that the trip had some kind of legit purpose.

And he was going with his boss so it’s plausible that he thought6 that it had some relation to his job. But the fact that Lee didn’t put the trip in his calendar really contradicts this version of things. If he was going on a legitimate trip for legitimate purposes with his as-far-as-he-claims-to-have-known legitimate boss then why leave it off the calendar unless he wanted to hide it? And why would he want to hide it if he really thought it was legitimate?

Of course, you might think, maybe he habitually left such things off his calendar. Maybe this particular omission means nothing because he just never calendared his out of town trips. Or maybe he thought the trip wasn’t work-related and he never calendared personal trips. But this excuse won’t fly. We have the guy’s entire 2017 calendar. For comparison, here are some of the that year’s travels he did enter:

And these are not all strictly business trips, either. The February 3 trip to Palm Springs, the February 16 trip to Las Vegas, and the April 7 trip to Anaheim are all for cheerleading competitions.9 Not only that but Lee quit his job with Englander in June 2017, which surely explains his two weeks in Las Vegas, Zion, and Cabo San Lucas. It probably also explains the chronological overlap with the first two, which is a normal vacation thing.

So not only did Lee habitually enter clearly work-related trips into his calendar, he also made entries for clearly not-work-related trips, e.g. to cheer competitions. He even entered trips he took after he quit his job. This is a good reason to think that Lee’s omission of the June 1-3 Las Vegas trip from his calendar is meaningful. To me it says that at the very least he knew something shady was going on.

And all this combined with the fact that not only does Lee now deny he knew something shady was going on but, through his spokesperson Grace Yao, takes extra care to deny that he was bribed with access to female escorts, makes me think he was more than knee-deep10 in the shady goings-on. But we’ll certainly know for sure when his indictment is published!11