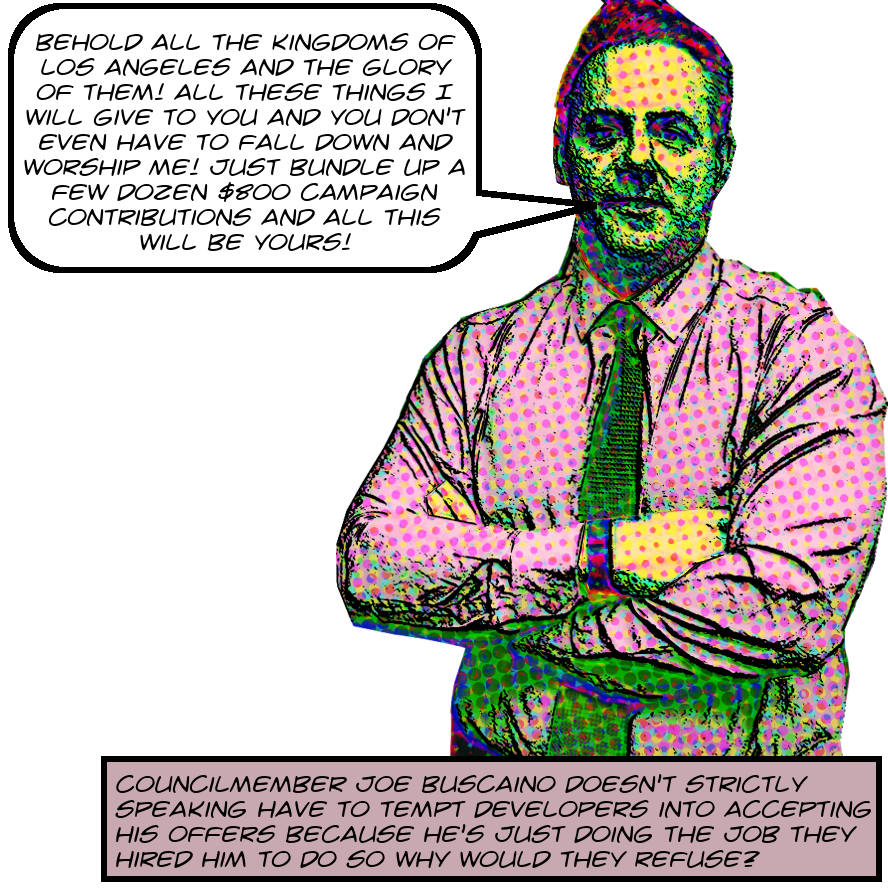 And the fact that the City is going to sell the properties to private developers3 supports the view that the goal is grift rather than using City-owned resources to help residents of the City. It’s not like the City of Los Angeles itself can’t develop its properties for commercial use, which would support economic development just as much as if a private developer owned the land, or more because more of the money would go to the City. Just for instance, the City owns plenty of parking garages, many of which have retail space at street level. The City offers these for lease to commercial tenants, a proposition which must be of more value to the City than if a private developer is involved in any capacity and taking out profits.

Furthermore, the fact that Buscaino is proposing to sell off these properties for whatever nebulous uses happen to be included in the pragmatically vague category of economic development rather than using them for publicly controlled social housing is appalling. This City has no need greater than the need for housing, and decades of experience have shown that giveaways to developers aren’t solving the problem. City-owned apartments will solve it. There’s no reason for the City not to build apartments on these parcels with retail on the ground floor, rent the apartments to Section 8 recipients, and require commercial tenants to hire locally, maybe in exchange for a tax break or discounted rent. The City has the resources, the ability, and the capacity to do this and the only reason they won’t is because it won’t enrich developers.

And as you might expect, it’s not just developers who are getting enriched by these selloffs. The procedure for divvying up the proceeds is in yet another Council File, CF 12-1549-S3.4 In 2016 Council passed a measure allocating half the proceeds to a newly established Economic Development Trust Fund and the other half to the Real Property Trust Fund of the Council District where the relevant property was located. Each CD’s Real Property Trust Fund probably has some vague dedicated purpose but they move money around between these discretionary funds at will. Once it hits the CM’s funds it’s all just fungible slush money.

And what the money gets spent on is famously hard to track, but it’s clear that a not insignificant part of it goes into constituent-pleasing projects like street slurrying or extra cops in neighborhoods. And of course these contribute to the already massive advantage enjoyed by incumbent councilmembers in elections. In other words the City Council is selling off pieces of our City to private developers and spending half the proceeds on ephemeral matters that ultimately promote their political careers. This is not only not fiscally prudent but it’s not sustainable. They’re trading land, an irreplaceable resource, for votes, which are transitory and only valuable to them.

Now, you may well recall that in December 2019 the Council passed a measure requiring that all City owned property identified for housing purposes to be used only for 100% affordable housing. This is contained in Council File 19-1362. At the time I was impressed by their taking such a bold move, even to the point of tweeting about it without sarcasm. But these two motions reveal the unexpected loophole in that superficially progressive plan, which we can expect to be exploited vigorously. CF 19-1362 only applies to property identified for housing purposes. If City property is not so identified then it doesn’t have to be used for housing.

On the one hand I’m a little embarrassed that I didn’t spot this at the time. I’m a little embarrassed that I was publicly optimistic about it on Twitter, that I was fooled yet again by these charlatans. But, you know, I’m not that embarrassed. There’s nothing shameful in being optimistic, in assuming elected officials aren’t a nihilistic pack of mendacious vultures.5 After all, if we can’t imagine our City being run by honest people with good intentions how are we ever going to make that happen? Did I mention that Nithya Raman is running against David Ryu in CD4 and Lorraine Lundquist against John Lee in CD12?