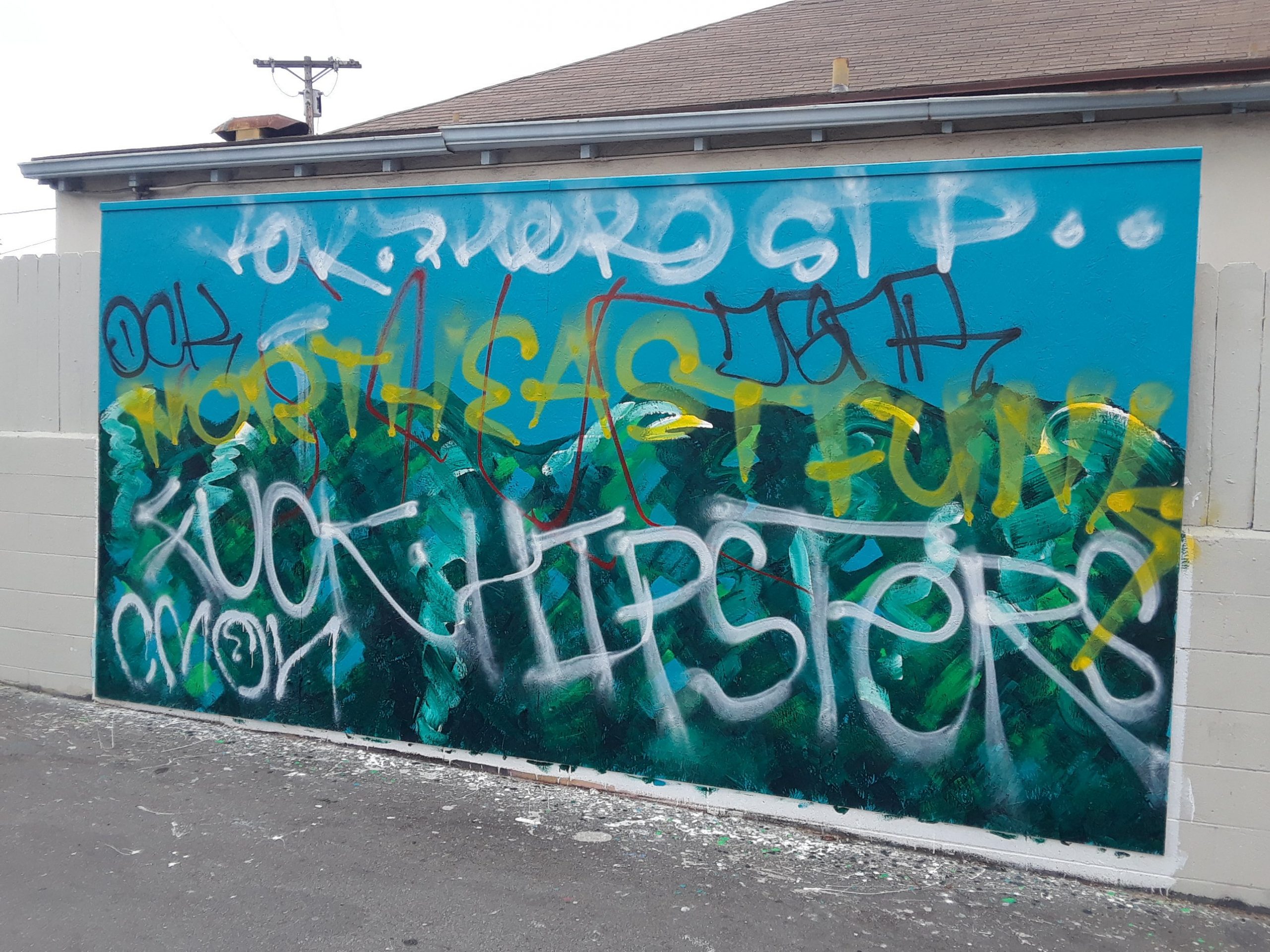 Neighborhoods in Los Angeles get gentrified and tagging is an antigentrification tactic.1 Carnicerias and panaderias and laundromats and all manner of businesses serving the to-be-displaced locals close down and yoga studios open up and get tagged repeatedly. Or art galleries. Or imposed-from-the-top-down hipster-pleasing murals. And the very predictable next move is for someone to disapprove of the tactics even if they approve of the sentiment. Or don’t approve the sentiment, like this fellow from El Sereno after some heavy anti-gentrification tagging earlier this year:

“The people who are behind this, they’re not open to discussion … They don’t want to be involved in policy-making, community planning, and updating processes… It’s just really a very narrow approach they’re taking.”

And as dense as this guy is, even he can see that tagging is related to, is an alternative to “policy-making, community planning, and updating processes” They’re part of the same sphere of action, that’s the key thing. Tagging and the official stuff that Mr. Galaxy Brain is contrasting it with are different roads to the same destination, which is local control over planning and land use.2 And one huge difference between the two has to do with who has effective access to each, who can use this one as opposed to that one to reach the goal.

The policy-making, the community planning that this genius is talking about are bound up in formal processes. With hearings, deliberations, public comments at meetings, letters, and so on. And this is a normal and a good way to make social decisions about land use. Or at least it would be if everyone could participate equally in these processes. And of course in theory they can. But in practice they actually can’t. Like really really can’t.

Notice is given in obscure venues. Meetings are held during working hours. Processes are fragmented across multiple meetings which are spread out over months. There are deadlines involved, often obscured beneath long chains of statutes referencing other statutes and so on. Effective involvement requires not only time to actually show up, but time to study, to research, to write, to think. Time to study the statutes, learn the requirements and the rules, and so on.

People with money, people profiting from gentrification, can pay professional advocates, lobbyists, representatives, staff, and so on to show up for them, to research, write, think for them, to comprehend, explain, and satisfy the procedural requirements. The victims of gentrification have to do all this for themselves while also working jobs, taking care of children, and so on. In practice only one side can participate effectively.

And it’s not an accident that these formal processes are set up to exclude their victims from effective participation. Or that the processes are complex to the point where expert advice and endless free time are required for effective participation.3 Equality would interfere with the business model of people who profit from land use decisions. Making money from gentrification requires helpless victims and people with effective access to due process are not helpless. Since, for all the same reasons as I listed above, these gentrification profiteers also control the process of process making, it’s no surprise that the processes that get made favor their interests.

But everyone wants to participate in policy-making, community planning, and updating processes. I’d go so far as to say that participation in these things is a human instinct. Everyone wants a say in how their neighborhood develops and how decisions are made that affect neighborhoods. And if the formal processes are designed to exclude the victims of gentrification then those victims are going to engage in informal processes. Like tagging.

Also, many neighborhood changes, important components of the gentrification machine, aren’t even really subject to much formal regulation. Land use is to some extent, especially when variances are involved, and alcohol licenses are too. But e.g. art galleries, yoga studios, cute clothing stores with succulents and natural linen, newcomer-serving charter schools, none of these enterprises require any kind of community discussion to open. And yet they’re essential components of gentrification.

It was a political choice to make uses involving alcohol subject to increased oversight and regulation and it was a choice to make yoga studies, art galleries, charter schools, and other tools of gentrification not subject to that kind of oversight. It’s a political choice to make certain kinds of land use require variances, which requirement increases the effectiveness of public input, and other kinds not. People with power see alcohol as consequential enough, as potentially threatening to their own interests, to require extra social control. Same thing with building permissions. They don’t see yoga and galleries that way.4

Gentrifiers need alcohol licenses and building permits to change neighborhoods but as the result of a political calculation they’ve ceded some power over these weapons to their opponents. Not so with yoga studios and art galleries, though. People without power rightly see yoga studios and art galleries as consequential, as dangerous, as needing regulation. But the interests of the powerful are universally furthered rather than threatened by these kinds of businesses so they’re not subject to any formal regulations. And again, without formal tools to regulate them people will use informal tools.

And the decision to make some land uses, like alcohol licenses, like building permits, subject to political control and not others, like yoga studios, is a political decision. So it’s not surprising that these categories reflect the needs of the powerful. There’s nothing intrinsically illegal about tagging either. It’s not like murder. There’s no theoretical reason why tagging couldn’t be regulated or even just allowed instead of forbidden. There’s no legal reason why a community desire to tag a business couldn’t just as well be part of a formal process.

There could be posting requirements, hearings, and so on, and if the will of the community was in favor there could be legally sanctioned graffiti. Given the existing amount of social control over every aspect of land use I can’t imagine any a priori reason why this would be impossible. So the fact that it’s not an option must result from political will, that is from an exercise of power.

It could easily be legal to have planning commissions empowered to force businesses to let their walls be tagged. The choice to make tagging illegal is a political choice. If power was arranged differently it could just as well be illegal to rent commercial space to yoga studios or art galleries or to evict tenants. All the tools of gentrification could be illegal, and the fact that they’re not only reflects power relations.

But rather than legalizing tagging, which would be satisfying in some kind of childish ironic way,5 it would be far, far better to radically equalize access to existing processes. This might include providing free lawyers for everyone in civil actions as well as criminal,6 or something else I can’t think of. Until that happens, though, and it’s not likely to be soon, the next time you’re tempted to come out with an unthinking “yes but…” in response to some anti-gentrification tagging, or meeting disruption, or whatever illegal means of expression, just keep in mind what’s at stake, and maybe, just maybe, don’t be so quick to equate the illegal with the bad.

Image of tagged mural in Highland Park is courtesy of Nolympics LA in this here Tweet thread. I mean, I say “courtesy of” because that the cliche and it rolls trippingly off the old keyboard, but since I didn’t even ask them if it was OK to use it I guess “courtesy” is pretty much a lie. More news when I have it!