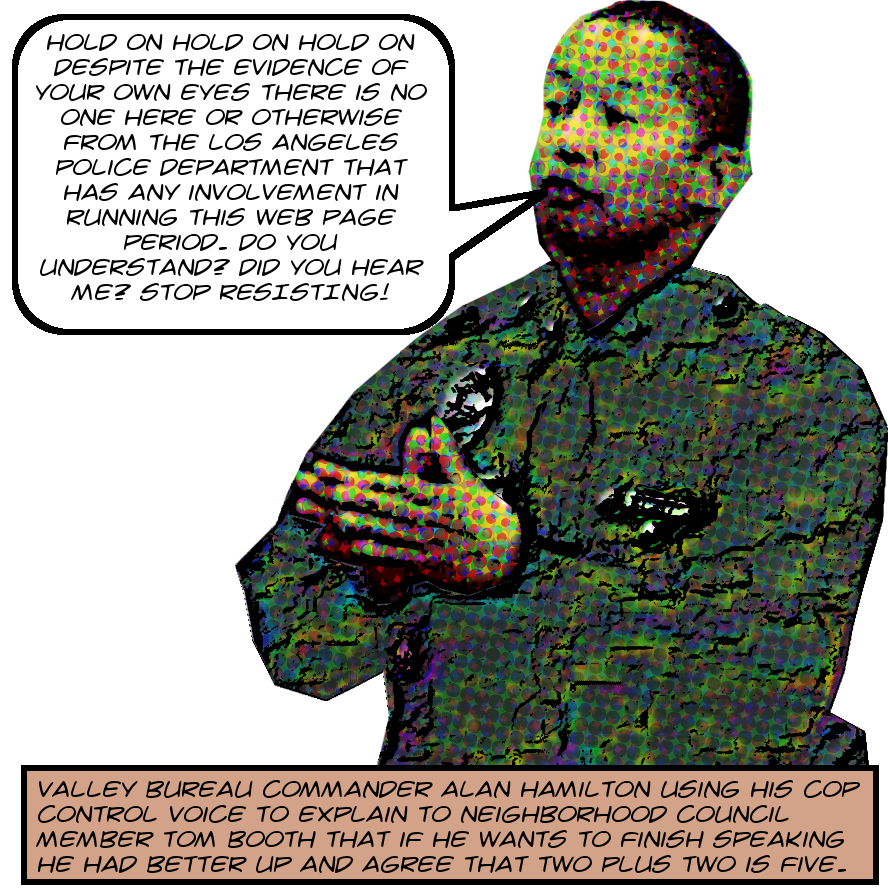 Monday evening, September 9, 2019, the Los Angeles Police Department held a meeting at Topanga Station to discuss the controversial-once-exposed participation of a bunch of its putatively estimable senior lead officers, notably Sean Dinse and Duc Dao, in a couple of creepy private anti-homeless vigilante-loving rage-filled Facebook groups, recently written about extensively by what the founder of these hate sites, Fern Peskin-White, or at least her dishonest hack of a lawyer has called, in a letter that’s practically a self-contained model bar exam question on California’s anti-SLAPP statute, “radical left-wing activists.”1

These groups are filled with two not-necessarily distinct populations. There are angry Valley dwellers who think it’s salient or funny or just even acceptably normal to be kidding-not-kidding about poisoning homeless people or shooting them with bullets and so on, and then there are a bunch of LAPD officers. The point is ostensibly for the cops to share info with the Valley dwellers and respond quicker than 911 or whatever but in practice what it looks like to people free of participant bias is that the police are indifferent to if not supportive of the hate, the anger, and the threats of violence.

And that they facilitate vigilantism in theory or practice by supplying these Facebook warriors with very personal information about their targets, none of which is good PR for LAPD. In fact maybe it’s even conduct unbecoming an officer or something actionable, so Jorge Rodriguez, head supreme LAPD Valley chief boss, possibly at the direction of his boss Michel Moore, kicked all the cops off the page and fired Fern Peskin-White from her cushy job as unpaid cop volunteer.

This action even further enraged the already mouth-frothing Valley dwellers, and so this meeting was called. And I went to the meeting! And took video of the first two hours! And here it is on YouTube! And also you can watch or download the full resolution version here on Archive.org if that’s useful to you! And read on for a click-through guide to the highlights of the meeting!2

★ Chief Jorge Rodriguez — Straight-up stating on camera that SLOs will not participate in the Facebook pages — I want to make sure that you understand that as the chief of the Valley I was the one that made the decision to have the SLOs stop posting in the Crimebusters page. — Paul Dumont and a few others applaud. A bunch of crimebusters hiss and tell Dumont to go home.

★ Paul Dumont — Member of ACLU — Calls out Rodriguez for talking as if homelessness is a crime like burglary, robbery, and so on.

★ Unnamed speaker number 1 — This woman really loves the but-we-were-just-kidding-and-no-one-actually-did-anything-illegal defense — How many of these hostile remarks actually have actually led to somebody putting rat poison in somebody’s soup? … There’s a certain amount of frustration from us as citizens, but they’re words. They’re words. We’re not going out and…As you know, the transient population, they DO commit crimes. Daily. Minutely. — And you can imagine the rest — We are good people! We just like to talk about poisoning homeless people and laughing and joking about it — But dammit they are the criminals and we are good people so why are we being punished and mocked?

★ World-renowned super genius Joel Glucksman — My question to you, what are we doing, what are you going to do to address media publications and/or private bloggers who are doxxing information and creating false narratives [sustained applause — cause the rest of these geniuses are equally or even more super than Joel Glucksman] which was the majority part of what led to all of this coming forward? — Shorter Joel Glucksman: They’re a bunch of big meany liars and you’re only taking our SLOs away from us because they exposed us — NO FAIR!!! — To his credit I guess Jorge Rodriguez said they weren’t doing anything because of the First Amendment

★ I moved here from West Los Angeles — And my friends love that page so much they want to start one in West Los Angeles! — This was evidently meant as an argument for continued cop participation in the the creepy vigilante homeless-hating Facebook pages but it’s hard for me to see it that way

★ Very simple question — When does Fern get her job back? — Page founder Fern Peskin-White was also an LAPD volunteer in addition to her real job of running homeless-hating vigilante loving secret Facebook pages — Then she was fired from volunteering is what this fellow is talking about — Jorge Rodriguez says he talked to her and it’s not that simple but he didn’t explain anything — Which is really interesting

★ Commander Alan Hamilton — took offense at something Tom Booth said — that cops helped run the pages — and he told Tom Booth using his command and control cop voice — Hold on hold on hold on — There’s no one here or otherwise from the Los Angeles Police Department that has any involvement in running this web page period. Do you understand? Did you hear me? OK, go ahead. — Listen to Hamilton’s tone of voice — There are a lot of people for whom a cop speaking in that tone of voice is the last thing they hear on earth — That barely submerged violence — That insistence that Booth agree to an obvious lie before the cop will let him talk — That’s a better illustration of the power mad culture of the LAPD than I could imagine

★ Michel Moore — Chief of police — By this point in the meeting under relentless pressure from this gang of privileged rich white Valley Dwellers Jorge Rodriguez had started equivocating about his commitment to keep the SLOs out of the vigilante Facebook pages — so it is essential to record the fact that there was nothing at all equivocal about Moore’s statement, with which we close:

We don’t have an answer except to say we will support every bona fide legitimate social media channel that we can within reason with information. But that doesn’t mean we have to be a member of it. And there are other means to provide information so that your needs are met. … But how this has gotten most recently, is a very emotional and contentious and at times filled with hate and hurtful and violent remarks that I do not have the temperament to have an officer not respond to because others say why aren’t you saying something? And so tonight I am here to say I am going to speak up and I’m proud of the men and women who have spoken up from the department to say “no, we’ve got to stop this right now until we can get a better control of the conduct of this.”