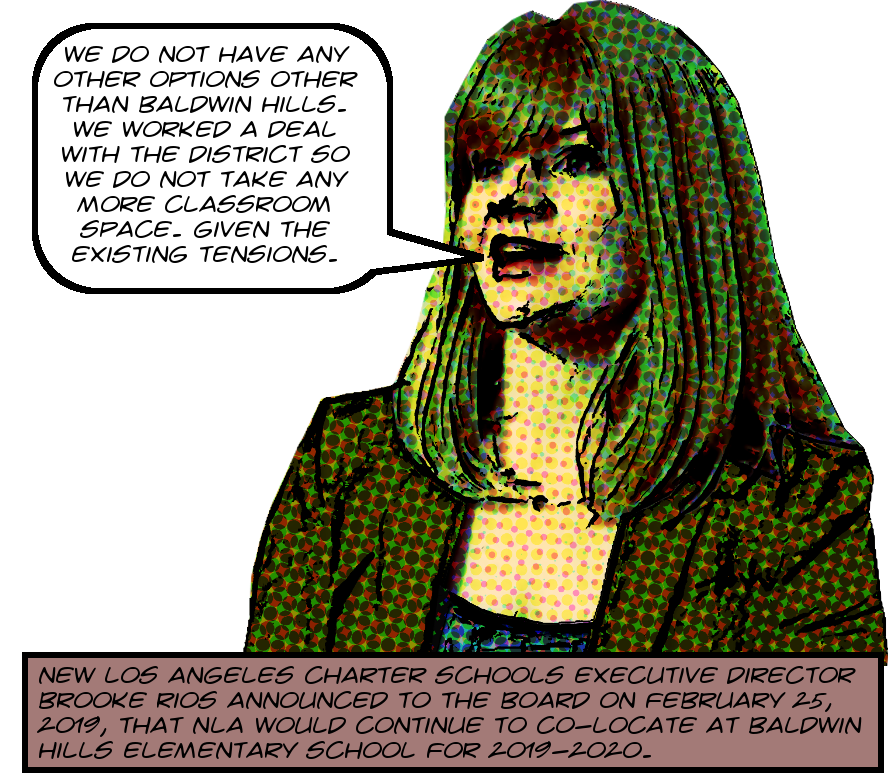 You may recall that the recent UTLA strike inspired me to spend a little time using the public records act to look into the state of charter schools in Los Angeles, and one of the ones I’m looking into a little is New Los Angeles Charter Schools. After a little of the usual nonsense I was able to obtain a bunch of emails relating to the strike.

The story behind the story, well-told in LA Taco by Daniel Hernandez, is that the public Baldwin Hills Elementary School is forced by state law to cede part of its campus to New Los Angeles Charter Elementary School, a process called co-location. It’s never been a comfortable arrangement but the strike brought everything to the surface, and the emails revealed that New Los Angeles executive director Brooke Rios didn’t think it was possible to continue co-locating there given that everyone hated them:

It is clear that the strike gave voice to the mounting tension between Baldwin Hills and New LA. To be frank—we are not welcomed there. Our Prop 39 offer will be issued on February 1, and it is likely that we will be offered one more classroom at Baldwin for 18-19. It is difficult to imagine another year on that campus after this week, and I am eager to consider other solutions.

Proposition 39 created this co-location system, and the Prop 39 offer that Rios talks about there is a formal offer from LAUSD allocating public school space to a charter school. And given that the offer would issue on February 1, I made plans to attend the next meeting of the board of directors to see what was going to happen. And if I’m going to attend, I’m going to film, of course.

So last night they held the meeting out at their secret headquarters on Washington Blvd. just east of Hauser. I rode the bus all the way out there and taped the whole damn thing. So behold! Eighty four minutes of mind-numbing mumbling with a few really interesting things interspersed. Watch it at your peril, but also take a look here where Brooke Rios discusses the Prop 39 offer. To everyone’s dismay New Los Angeles was offered space at Baldwin Hills Elementary School and given no choice at all in the matter.

And Rios announces that New Los Angeles will seek not to exacerbate the tension any further by not taking up any more classroom space than they have been taking. So they’re not leaving, but they’re not expanding into more classrooms. This is going to require a significant increase in class size, which Rios and some board members anticipate will make parents pretty unhappy and might even induce some of them to move their kids to another school. How does Rios propose to deal with this desperate situation? Like any good bureaucrat, she’s forming a committee of the board! The committee will be looking for affordable privately-owned space that doesn’t involve co-location, which has turned out to be unreliable.

It was interesting but not surprising that throughout the discussion at the board meeting, no one on the primarily white board of directors or staff even mentioned the racial aspects of the situation, well explained by Hernandez, which is that the charter school is taking up space that could be used to serve the primarily African-American student body at Baldwin Hills.

It’s heartening to see that protests, shunning, and similar social action1 can actually lead to charters leaving co-located schools, or at least really trying their best to leave! There really aren’t other tools available to the parents of public school children to rid their campuses of privatizers, forced on them by state law. Nothing got settled at last night’s meeting, but I will continue to follow the story. Turn the page for a transcription of some of the discussion.

Brooke Rios on the Prop 39 offer:

Brooke Rios: So our Prop 39 offer. So we do not have any other options other than Baldwin Hills. And what we have agreed to do, we worked a deal with the District where we do not take any more classroom space. So it’s really important to us. We do not want to take any more space on that campus given the existing tensions. And so what we will be doing next year is making some adjustments to our program because we will be on the Baldwin Hills site. We signed a [unintelligible] agreement for next year for the same number of classrooms that we currently have.

Unidentified board member 1: How does that work with the size of the school?

Rios: Yeah, so we will [unintelligible] kindergarten and we’ll have a really big fourth grade class.

Unidentified board member 2: How big?

Kate O’Brien:2 We currently have 36 third graders who are in two classes which are [unintelligible] one class, so we’ll have one class, full-time assistant will be in that class. We anticipate we’ll have a couple of those leave, hopefully bringing it down a little bit. We’re gonna communicate with parents shortly.

Unidentified board member 1: How are we rolling this out? [unintelligible] my kid in a very large fourth grade class. [unintelligible] Should I be thinking about some place else for fifth grade?

Rios: Well, I think that’s relevant to the next point here. We have to figure this out. We desperately need a site. LAUSD is out of options for us in this [unintelligible] district. And we need a site. So Alice and I have been talking about the possibility, and some other board members have expressed interest as well, we need a committee that is really focused on finding a site for our elementary school.

Image of Brooke Rios is ©2019 MichaelKohlhaas.org and is extracurricularly related to a screenshot from this video over here.